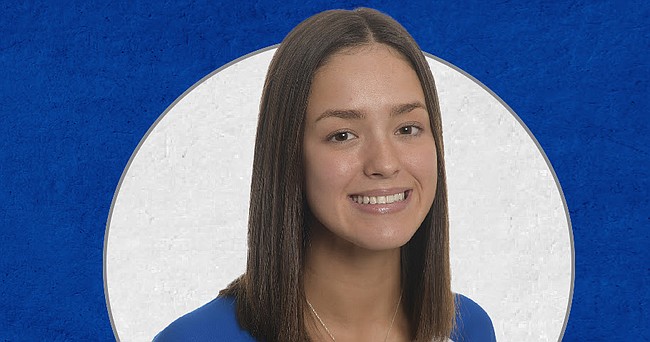 Kansas freshman Caroline Crawford, a middle blocker from Lansing High, was named the Big 12 Conference's pick for preseason freshman of the year on Monday, June 29, 2020.

The Big 12 volleyball coaches believe KU has the best freshman in the conference entering the 2020 season.

KU freshman Caroline Crawford, a middle blocker from nearby Lansing High, was named the Big 12’s Preseason Freshman of the Year in a vote by the conference’s head coaches on Monday.

She becomes just the second Jayhawk to receive such recognition, joining former All-American setter Ainise Havili, who earned the preseason honor in 2014.

Crawford, who spent the first three seasons of her prep career in Liberty, Mo., committed to KU during her freshman season and said she was caught off guard by Monday’s news.

“I was kind of shocked because I had never really thought about it,” Crawford told the Journal-World during a Tuesday morning phone interview. “It’s very exciting. I just have to put in the work now.”

The 6-foot-3 Crawford, who was ranked No. 22 nationally in the 2020 recruiting class by PrepVolleyball, said she thought her international and club volleyball exposure to the rest of the conference’s coaches put her in the running for the honor.

And she added that the extra attention at the outset of her college career might put a target on her back.

“You could say it brings a little pressure,” she said. “But pressure is kind of like a challenge. It’s great to have this honor, but there’s also a bigger team goal in mind, and that’s the main focus.”

That same mindset helped Crawford achieve her greatest accomplishment to date as a volleyball player in 2019. As a starter for Team USA at the Women’s U18 World Championship in Egypt, Crawford helped the United States bring home a gold medal.

“I can’t even describe (the feeling) when you’re standing on the podium, you’re wearing the red, white and blue and they’re playing the anthem,” Crawford said.

Crawford followed that up with a dominant senior season at Lansing High, where she earned AVCA First Team Under Armour All-American honors and was named the Kansas 2019 Class 5A Player of the Year.

She comes to KU as part of a loaded class of newcomers that has been ranked in the top 10 nationally by volleyball recruiting services.

Most, if not all of them, will be in Lawrence Wednesday, when the team is slated to arrive on campus for the first day of voluntary workouts as allowed by the Big 12’s return-to-campus guidelines.

During the past few months, while club tournaments and nationals were being canceled because of the COVID-19 pandemic, Crawford said she stayed in shape by lifting weights at home with her brother and running outside while also following the individual workout plan provided by KU.

Despite the lingering uncertainty surrounding the pandemic, Crawford said she was confident that the proper precautions were in place at KU and was eager to get back to playing volleyball on a regular basis.

“Hopefully we’ll have a season,” she said. “And I’m not really nervous about it. I’m actually really excited to move in and finally be on campus. I’m just taking this opportunity as it comes and making sure I don’t take anything for granted.”

It’s great to learn about Caroline. Hopefully there are more articles coming about the other athletes coming back to campus and that there will be a season once again.

We're hoping the same. I will say, KU has said on more than one occasion recently that student-athletes are not available for interviews right now. I was lucky to get Caroline a day before she reported to campus.

We'll do our best, though. Thanks for the comment!

Let's hope she gets a chance to strut her stuff.