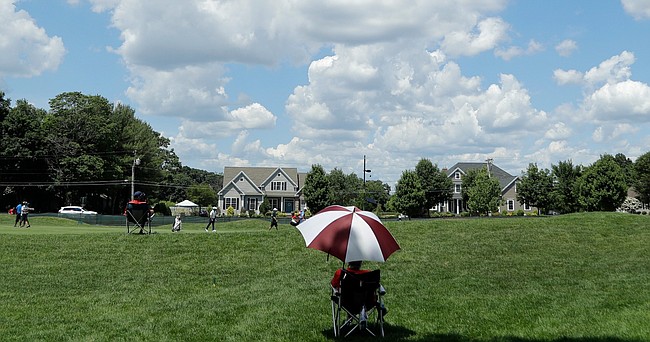 A volunteer uses an umbrella while watching golfers pass on the seventh fairway during the second round of the Travelers Championship golf tournament at TPC River Highlands, Friday, June 26, 2020, in Cromwell, Conn.

Former Kansas golfer Gary Woodland missed the cut and will not play in this weekend’s third and fourth rounds at the Travelers Championship in Connecticut.

Woodland shot a 2-under-par 68 on Friday, recovering from a rough front nine with five birdies on the back nine. But it was not enough to keep him around for the weekend and he missed the cut by two strokes.

Woodland, who responded to a 3-over par 38 to open Friday’s second round with birdies on five of his final eight holes, finished 2-under for the tournament and missed the cut by two strokes.

Woodland shot 68 on Friday after shooting an even-par 70 on Thursday.

By the time his second round was finished — after a birdie at 18 late Friday morning — Woodland was just one stroke off the cut line and was clinging to hope.

But as the day progressed, the golfers still on the course reset the cut line, pushing Woodland farther down the leaderboard and sending him home early.

It marked the second consecutive week that Woodland took a step backwards after finishing ninth in the Charles Schwab Challenge two weeks ago, the PGA Tour’s first event since resuming play after the COVID-19 pandemic shut down the sport.

Woodland now will look to regroup for next week’s scheduled stop in Detroit for the Rocket Mortgage Classic.