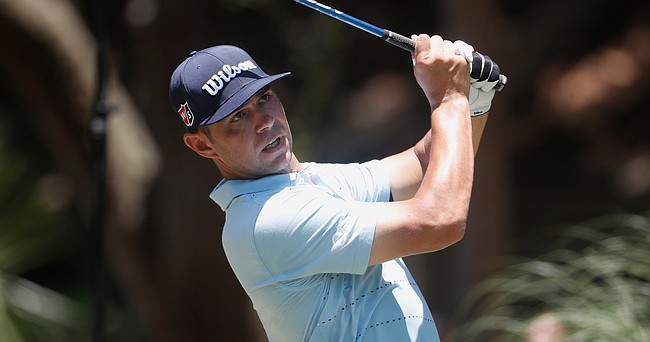 Gary Woodland follows his shot from the second tee, during the first round of the RBC Heritage golf tournament, Thursday, June 18, 2020, in Hilton Head Island, S.C.

After a slow start to his round on Thursday at the RBC Heritage golf tournament in Hilton Head Island, S.C., former University of Kansas golf standout Gary Woodland finished on a hot streak for the second week in a row.

After shooting a 2-over par 38 on the front nine, Woodland carded birdies on four consecutive holes (13-16) on the back nine on Thursday to finish at 4-under on the back and 2-under for the round.

Last week, during the opening round of the PGA Tour's first event back from the pandemic-induced shutdown, Woodland birdied five of his final seven holes to put himself squarely in contention the rest of the week. That propelled him to a ninth-place finish and had him sitting in a tie for second place, one stroke back, heading into the final round.

Woodland opened Thursday with a birdie on No. 2 and then bogeyed three of the next six holes before straightening things out on the back nine.

The reigning U.S. Open champion enters Round 2 in a tie for 45th, five shots off the lead held by Ian Poulter and Mark Hubbard, who both shot 7-under to lead by a stroke over seven golfers at -6.

Woodland will get his second round under way bright and early on Friday, teeing off on No. 10 at 6:29 a.m. in a group with Dustin Johnson and Hideki Matsuyama.

Hopefully, the earlier 2nd round start will make a difference. Seems like the majority of the low rounds on day one were turned in by the guys who got out on the course early. Greens holding better? Less windy maybe?