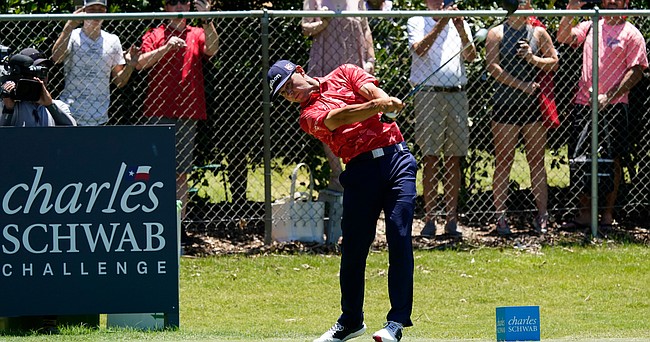 Gary Woodland tees off on the second hole during the final round of the Charles Schwab Challenge golf tournament at the Colonial Country Club in Fort Worth, Texas, Sunday, June 14, 2020.

After playing nearly flawless golf through three rounds, former Kansas golfer Gary Woodland ran into a little trouble on the back nine at Sunday’s final round of the Charles Schwab Challenge in Fort Worth, Texas, finishing even for the day and alone in ninth place at 12-under for the tournament.

Woodland recorded just three total bogeys in his first 54 holes at the first PGA Tour event since the COVID-19 pandemic shut down the sport in March.

But on Sunday he carded three bogeys in a four-hole span midway through his final round.

The temporary slip-up knocked him off the pace at the top of the leaderboard and left a late rally a little short.

Woodland birdied Nos. 12 and 16 to get back to even for the day but could not make up any ground on the leaders.

His day began in promising fashion.

After being put in the final pairing following a strong third-round finish, Woodland birdied Sunday’s first hole to move into a first-play tie with playing partner Xander Schauffele.

He parred the next six holes before bogeying No. 8 to give back the early birdie and finish at even par for the front nine.

Woodland shot 65-67-66-70 for the four-day event at Colonial Country Club and will move forward looking to take advantage of the momentum that comes from his fifth Top 10 finish of the odd 2020 season.

Woodland finished tied for eighth at the Honda Classic back in early March, giving him back-to-back Top 10 finishes on the season.

The former KU standout and native Topekan entered this week ranked No. 18 in the World Golf Rankings.

As for the Schwab Challenge, Daniel Berger defeated Collin Morikawa in a playoff to take the title.

The two finished tied for the lead at 15-under after 72 holes, and Berger took the crown with a par on the first playoff hole.

The PGA Tour, which became the country’s second major sports league to resume play after the disruption brought about by COVID-19, will move to Hilton Head, S.C., next week for the RBC Heritage at Harbour Town. That event was originally scheduled for mid-April.

PGA Tour Commissioner Jay Monahan, on the first tee when golf returned Thursday, was back in Florida watching a final round unfold with eight players taking turns at the top, and a half-dozen still in the mix over the final hour.

The scorecard this week included 487 tests for COVID-19 at Colonial, all returned negative. The leaders brought star power, Colonial brought heritage, and it was the first live PGA Tour event since March 12 because of the pandemic.

“This has been a phenomenal start to our return,” Monahan said.

Monahan conceded his biggest concern going into the week, even with its testing and safety procedure, was positive tests popping up.

“That’s something, candidly, that I lost a lot of sleep over in the weeks that preceded coming in,” he said.

As the Tour heads to the South Carolina coast, Monahan said the first week won’t be complete until they see how players handle the interstate travel.

“This is about a sustained return,” Monahan said. “But I think as we sit here late in the day Sunday, there’s no question that this has been an exceptional week.”

No doubt, Gary is a little disappointed, but to add some perspective, Justin Thomas and Jordan Speith also started the day at -12, and they were both +1 for the round. And, Rory McIlroy, who was also in the hunt, was +4 for the round, so it's not as if Gary was the only one with regrets. All said, not at all bad..