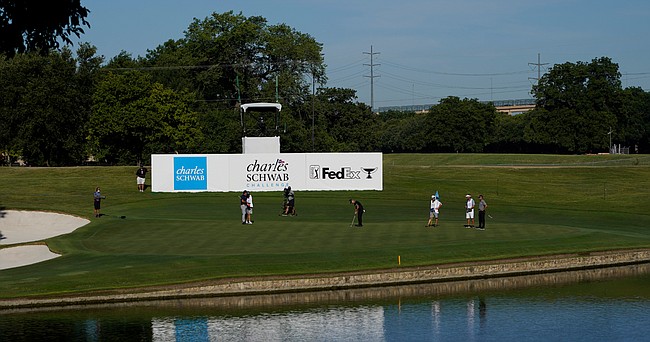 Phil Mickelson, Gary Woodland and Kevin Na play on the 13th green without the presence of a gallery during the first round of the Charles Schwab Challenge golf tournament at the Colonial Country Club in Fort Worth, Texas, Thursday, June 11, 2020.

After finishing Round 1 at Colonial Country Club with five birdies in his final seven holes on Thursday, Woodland birdied two of his first four holes on Friday and added two more birdies at No. 9 and No. 11 to move to 9-under.

After playing 32 holes of bogey-free golf, Woodland’s streak ended at No. 15, when he carded a 5 on the 428-yard par 4. He followed that up with a bogey on the par-3 16th and fell to 7-under for the tournament with two holes to play in the second round.

Woodland quickly got one of the two miscues back with a birdie at No. 17, and he finished Round 2 with par on No. 18.

Woodland, who shot 3-under on Friday, enters the weekend at 8-under for the tournament and in a seventh-place tie with four other golfers, including first-round leader Justin Rose.

“The leaderboard is a ‘who’s who’ of golf right now,” Rory McIlroy said after a 63, with a bogey on the last hole. “I’m just happy to be in the mix.”

Harold Varner III leads the event at -11, Jordan Spieth sits one stroke back in second place at -10 and three golfers, including McIlroy, sit in a fourth-place tie at -9.

Nice to see that Gary is playing solid golf after the down time.

If Gary doesn't win, it would be nice to see Varner win. With all that's been happening re the protests and the efforts to change systemic racism, it would be great to have one of only four African-Americans on tour win the first tournament back, in a sport that has been so lily-white over the years.