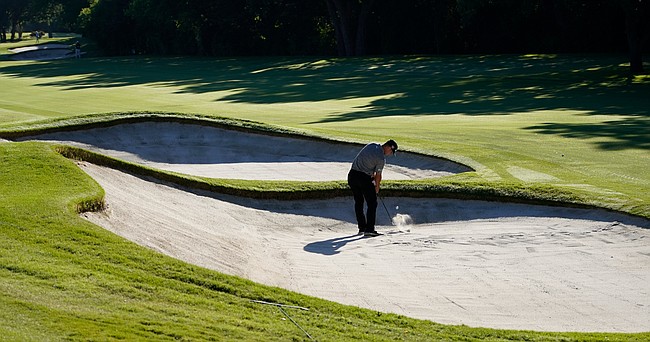 Gary Woodland hits out of the sand on the 11th hole during the first round of the Charles Schwab Challenge golf tournament at the Colonial Country Club in Fort Worth, Texas, Thursday, June 11, 2020.

Former KU golfer Gary Woodland finished his first PGA Tour round after the COVID-19 pandemic layoff with a flurry at the Charles Schwab Challenge golf tournament Thursday in Fort Worth, Texas.

After recording pars on his first 11 holes, Woodland birdied five of his final seven to finish Round 1 at 5-under and in a tie for seventh.

Two of his five birdies came on par-3s and he birdied the final two holes he played on Thursday.

Woodland, who split his quarantine time between Kansas and Florida, was one of the first golfers on the course at Colonial Country Club on Thursday. At the time he finished his round, he was in a fourth-place tie. He heads into Friday as one of 15 golfers within two strokes of the lead.

Justin Rose and Harold Varner III each fired a 7-under to claim the Round 1 lead. Jhonattan Vegas, Collin Morikawa, Justin Thomas and Abraham Ancer sit in second at -6. 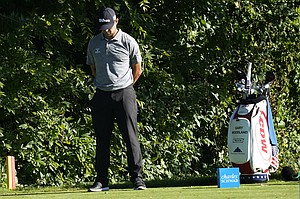 Gary Woodland observes a moment of silence on the 13th tee during the first round of the Charles Schwab Challenge golf tournament at the Colonial Country Club in Fort Worth, Texas, Thursday, June 11, 2020. Players at the 8:46 a.m. tee time paused to pay their respects to the memory of George Floyd for a moment of silence, prayer and reflection.

The round was the first for the PGA Tour since golf joined all other major sports in shutting down in response to the spread of the pandemic.

Golf is the second major sport in the U.S., behind motor sports, to resume a schedule, with others, including Major League Soccer and the NBA, soon to follow.

Among the safety measures taken by the PGA Tour were coronavirus tests for every player, caddie and essential personnel. Of the 487 tests at Colonial, the results were all negative.

PGA Tour Commissioner Jay Monahan watched from the starter’s booth — a rarity for him to be on the first tee of any opening round — and returned to the tee for the 8:46 a.m. starting time with no players’ names listed on the tee sheet. The tour kept that time open as a tribute to George Floyd, who was handcuffed while a white police officer pressed his knee to the back of the black man’s neck. Floyd died after pleading for air, sparking worldwide outrage over racial injustice.

Everyone at Colonial — on the course, on the practice range — stopped for a moment of silence on a course that already was quiet without spectators.

That, along with some quality golf as the day moved along, was what stood out most at an event with no crowd, no grandstands and no tents, the typical structures that define a golf course.

Woodland and the rest of the field will return to the course Friday for Round 2.