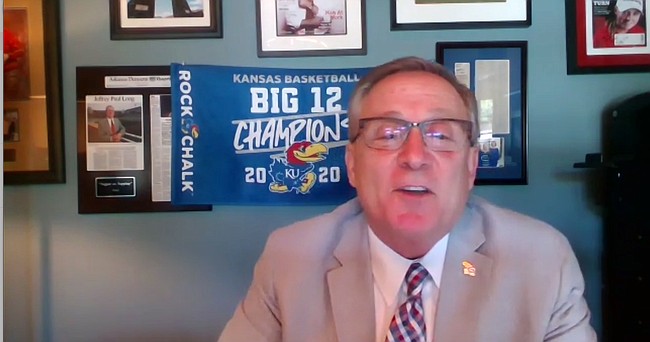 KU Athletics Director Jeff Long speaks during a board of directors meeting held via Zoom on Wednesday, June 3, 2020.

The board of directors for Kansas Athletics, Inc. on Wednesday approved an operating budget for the coming fiscal year roughly $5.1 million smaller than the current operating budget as the COVID-19 pandemic continues to present officials with a myriad financial unknowns.

In Fiscal Year 2021, KU Athletics will operate on a budget of $100.9 million. If things were operating as normal, the proposed budget would've been $108.6 million, said Pat Kaufman, KU Athletics CFO.

The 7% budget reduction was smaller than it could've been — in part due to savings and salary reductions undertaken during the current fiscal year, Kaufman said.

"We have many unknowns today," Kaufman said Wednesday during the board's quarterly meeting.

That's why, he said, officials chose to take a proactive approach to the coming year's budget. It also helps, Kaufman said, that Kansas Athletics will end Fiscal Year 2020 with a surplus of around $775,000.

"I made it clear to Jeff that the university is not in a position to bail out athletics," Girod said.

Though there are many unknowns still associated with how the COVID-19 pandemic will impact universities' ability to play sports in the fall, or if fans will be allowed in stadiums, Long on Wednesday sounded a note of optimism.

"We will know more before September 5," Long said. "Much, much will change ... This is not a time to panic."

Referring to the scheduled home football opener on Sept. 5, Long also said that to this point, the department has already seen a 90 percent renewal rate for football season tickets.

"Our fanbase has clearly demonstrated they want to come back," Long said.

Over the coming month, student athletes in football, volleyball, soccer, cross country and men's and women's basketball will gradually be able to return to the KU campus. When they do, Long said Wednesday, all athletes will be tested both for COVID-19 and for antibodies of the virus.

The board did not discuss a pending lawsuit involving former football coach David Beaty and did not hold an executive session Wednesday to discuss any matters in private.

Does he have articles about himself on the wall behind him? That says a lot about the man right there. Would have loved to be a fly on the wall during his deposition.

Does he have articles about himself on the wall behind him? That says a lot about the man right there. Would have loved to been a fly on the wall during his deposition.

Maybe, given the sh... show they’ve collectively produced, a full refund is in order?

For $40 million, you can hire another dense white guy who has no clue what he’s doing. Ladies and Gentlemen, let me introduce your new AD, a guy too cowardly to “say his name”.

If you are noticing a trend here.....