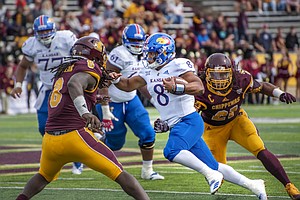 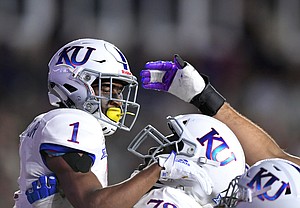 A year ago we were led to believe the race was neck and neck between Stanley and MacVittie. How much of a drop off can MacVittie be if it was really that close. And given a year of maturity, it's possible he's an upgrade.

I suppose anything is possible, but I don't think it's advisable to go into this season thinking MacVittie (or any of KU's QBs) will be an upgrade over Stanley in 2019.

Carter had a strong season last year and entered the season with 29 games of experience under his belt. These guys don't have near that much experience and are going to need some time to settle in and figure it all out.

Plus, they haven't had any time at all to get ready. No spring ball. Limited summer workouts. That's really going to have an impact.

OTOH, Dearmon got Stanley to 61% pass completions a level never before dreamed of for him. Question is after working on Kendrick (I don't think MacVittie is a serious possibility) what might he do there. I do believe we have an OC and QB coach who can actually produce results. In other words, the guys we have will be better with him guiding them than anywhere else they could be. Watch out for Daniels. He is the only one Dearmon has personally chosen.

There was one article midway through last year with a quote from Carter that seemed incredibly important to me both for his play last year and explanation for the previous years. He said that part way through the summer he stopped trying to make every pass be a homerun and switched to a mentality of just trying to move the offense. I would guess that our current candidates don’t need to make the same adjustment, but it is encouraging to realize these guys can have light switch moments. The lack of practice time definitely hurts. It is encouraging that the skill position players are such a strength. The O-line has some holes to fill?

The D gets a big boost over most of last year by having a healthy Dru Prox?

It would be a big hit to lose Co, though understandable in light of the info from pre-chaos. Guessing the team has a no comment position on suspended players.

Frankly Harris has underperformed anyway. Possibly his off field problems explain his on field deficiencies. If he can play then bring it on. If not, next man up.