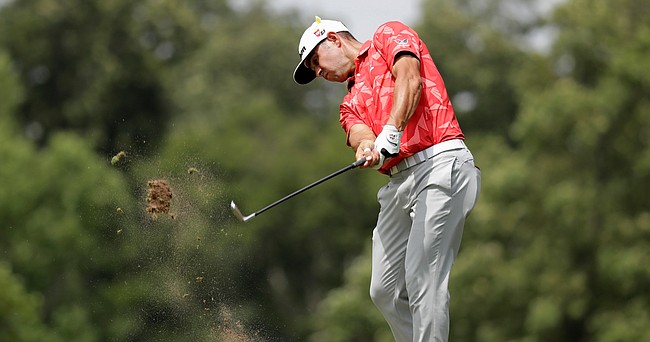 Gary Woodland hits from the ninth fairway during the final round of the Memorial golf tournament, Sunday, July 19, 2020, in Dublin, Ohio.

Another round over par on Sunday led former University of Kansas golfer Gary Woodland to a 22nd-place finish at the Memorial in Dublin, Ohio.

After finding early trouble with a double-bogey at the par-4 second hole on Sunday, Woodland shot a 5-over par 77 for the round to finish 3-over for the tournament.

Woodland’s first- and second-round scores (68 and 70) put him in contention heading into the weekend at Muirfield Village Golf Course in Dublin, Ohio, but he struggled with consistency on both days and fell off the pace.

Even with a 76 on Saturday, Woodland opened Sunday in a tie for 12th and with a top-10 or top-five finish within in reach.

His final round featured two double-bogeys, an eagle and everything in between. He shot 39 on the front nine and followed that up with a 38 on the back.

After going bogey-eagle-bogey-double to start the back nine, Woodland carded pars on his final five holes.

Woodland held the lead at different points during the first two rounds and appeared to be poised to make a run at the title over the weekend.

The Memorial field, which featured the return of Tiger Woods, who shot 6-over for the tournament and 4-over on Sunday, included 48 of the Top 50 golfers in the FedEx Cup standings and the top nine golfers in the World Golf Rankings.

Woodland said early in the event that the course set up and played like a major championship. Sunday's scores certainly illustrated that, with just nine golfers finishing under par in the final standings.

Jon Rahm was one of them. He finished at -11 and ran away from the field to win by five strokes over Ryan Palmer (-6) despite shooting a 1-over 73 on Sunday.

“Tough, tough conditions to start out my first week back, Thursday and Sunday,” Woods told the Associated Press after his Sunday round. “But it was good to get the feel and the flow of competing again.”

Woodland entered the week ranked No. 27 in the FedEx Cup standings after moving up 11 spots following a top-five finish at Muirfield Village last week at the Workday Charity Open.

Overall, the PGA Tour’s post-pandemic restart, which began June 14, has been good to Woodland.

The Topeka native has played in five of six tournaments and made four of five cuts, with top top-10 finishes and Sunday’s top-25.

His lowest finish in his five starts this summer came at the RBC Heritage, where he finished tied for 62nd one week before missing the cut at the Travelers Championship.

Next up is the 3M Open Thursday through Sunday at TPC Twin Cities in Blaine, Minn.

Where do golfers buy their clothes?