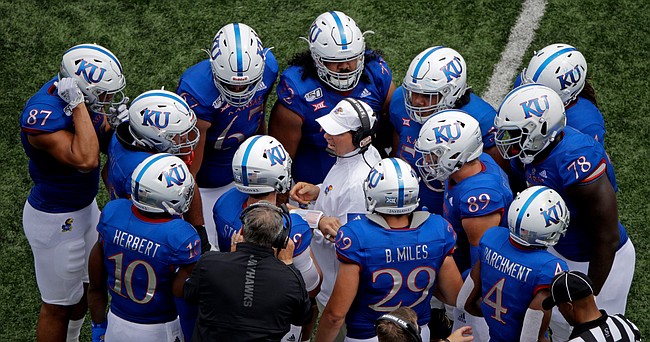 The Kansas football program found itself in the familiar position of last place when the 2020 preseason Big 12 Conference media poll was released Friday afternoon.

KU, which finished 3-9 during head coach Les Miles’ first season in Lawrence in 2019, finished 10th in the 2020 preseason media poll by a wide margin.

Kansas picked up 100 points from the 90 voters who participated in the poll. Meanwhile, ninth-place Texas Tech finished with 267 points.

The math shows that not every ballot had Kansas in last place. But most did, just as most pegged Oklahoma as the preseason favorite for the fifth year in a row.

Friday marked the 10th consecutive preseason poll in which the Jayhawks have been picked to finish last in the Big 12.

In eight of the previous nine seasons, under four head coaches, KU finished exactly where the Big 12 media believed it would in the final conference standings.

Interim head coach Clint Bowen, who took over for Charlie Weis four games into the 2014 season, led the Jayhawks to the win over the Cyclones that temporarily lifted them out of the Big 12 cellar.

The last time KU was picked to finish somewhere other than 10th in the Big 12 preseason poll was 2010, when the conference still had two divisions and 12 teams.

KU was predicted to finish fourth in the six-team Big 12 North that season, but finished last in the division in Turner Gill’s first season, going 1-7 against conference foes and 3-9 overall.

Kansas has not won more than three games in a single season since going 5-7 in the final season of Mark Mangino's tenure in 2009.

In the 10 seasons since Mangino departed, KU has won three games four times, two games three times, one game twice and gone winless once. All of it adds up to an average of two wins per season in the post-Mangino years.

Miles’ arrival brought hope back to the KU fan base, and the Jayhawks won three games in Miles’ first season. The Jayhawks won six games total in the past two seasons — one more game than they won in the four seasons before that combined — and some believe that Kansas could take yet another step forward during Miles' second year.

In order to do that, the Jayhawks will have to find a replacement for 2019 quarterback Carter Stanley, who delivered the best statistical season by a KU QB since Todd Reesing. KU also will need to find a way to replace nearly the entire secondary and a couple of key offensive and defensive linemen, all while doing it with a coaching staff that features five new faces among Miles’ top 11 assistants.

Overcoming the COVID-19 pandemic could be KU’s biggest challenge this season, but KU Athletic Director Jeff Long told the Journal-World on Wednesday that he was optimistic that there would be football this fall and that KU's upcoming season would be a good one.

“We’re excited,” Long told the Journa-World. “You know, we’re building a program, and I’m confident we are going to take a step forward this year.”

Third year is where I expect to see an increase in number of wins, when the recruiting starts to pay serious dividends. Until then, I'm looking for positives that show we're moving in the right direction. To rebuild from where we started will take time. Patience is required. We have the right coaching staff in place to make it happen. We just have to give them the time needed before we start to show impatience.

This year might have been a little better, but without a chance to practice in the spring with the new offense, that will make a big difference. That also might slow the overall progress enough that it might not be until the fourth year when we can really see some big improvement.

No surprise here. Picking KU last in football is the equivalent of picking KU first in basketball. They're both easy picks.

Most everybody was already grumbling at Beaty on year TWO. That was with a bare cupboard that he had to work with. Les gets the same leash. Actually, more should be expected from him, as he is a coach with pedigree and had much more talent to work with. 5 wins or he should be on the hot seat

Beaty was on the hot seat because he displayed incompetence on a regular basis. It wasn't just about wins and losses, it was about the clear inability to make consistent rational decisions on the football field.

With Miles, it's also not just about wins and losses. The team has already shown progress under him, and given his history he certainly deserves the benefit of the doubt.

Len, I will concede on some of your points. I would point out that our losses in Big XII last year were atrocious. We gave up more points in BIG XII last year than the final year under Beaty. I have serious concerns. Also, Dearmon had some good games, but he also was calling plays against Baylor, TCU, KSU, where we scored less than 2 touchdowns. I’m not quite so quick to jump on the “we showed progress” bandwagon.

Because Beaty showed almost immediately in year two that he was an imbecile. He had never won anything. He’d never done anything. And he was such an obnoxious disciple of an offense that he had never coordinated, he chased off all the non-believers, from coaches to quarterbacks. “Oh woe is me, if only I could find a Unicorn to run my precious offense!”. He was a lot like Gollum.

Miles has earned a little more leeway, don’t you think? You know, with the National Championship and all.

Glen Mason won four games in year two. Would you have fired him? Then you would have missed some bowl games, the NCAA rushing record, June and Gilbert.

And, for the 4,000th time, Beaty left the roster in virtually the same shape he inherited it. He did literally nothing for this program. Plus, he had zero recruits when he was fired. Plus, plus: Miles literally had weeks to try and recruit and staff.

Miles is the Joe Biden of KU football. Just get someone who won’t do stupid stuff day in and day out. Let’s start there.

Many things wrong in your comments Brett. Miles had nothing? Ok, get rid of Carter Stanley, Harris, Mike Lee, and Pooka......for starters.

EVERYBODY knew that Beaty was going to be fired, that had a HUGE part in not one kid committing. They were waiting to see who his replacement was going to be. There would have been recruits already committed if our AD had said KU was keeping Beaty and given him an extension.

Waiting so long to fire him was not a smart move and that was commented on by many on this site. Yes, it put Les in a bad place, but it was in no way Beatys fault. That goose egg falls on AD Long.

pretty clear from outside that les made progress year one. beating bc in beantown was impressive. things fell apart as the season went on due in large part to a lack of depth on the lines of scrimmage. but les will get it done. i think year three is a bit early, maybe four or five. bill snyder averaged 2 conference wins his first four years at k-state, then turned it on.