On Friday, Jan. 31, 2020, Kansas Athletics announced its new annual endeavor known as the Marian Washington Trailblazer Series, which will honor the contributions and accomplishments of current and former African-Americans at KU each February as a part of the celebration of Black History Month.

Kansas Athletics is introducing a new annual series designed to celebrate Black History Month and honor some of the achievements and accomplishments of African Americans who have come through KU.

Officially dubbed The Marian Washington Trailblazer Series, the new endeavor, which will honor four current or former Jayhawks each February — one per week — will tell the stories of the honorees through highlights, interviews and more on KU’s website.

Up first is Washington, the longtime KU women’s basketball coach who won 560 games at Kansas from 1973-2004. Washington also served in an administrative role from 1974-79, further expanding her ability to impact KU’s student-athletes. 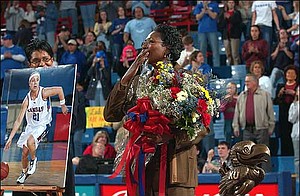 She was the first African American woman to coach a United States women’s basketball team in international competition and also helped start the intercollegiate women’s track and field program in 1974, serving as its head coach during the first year of competition.

Washington will also have her contributions celebrated as part of the new Jayhawker Podcast on Feb. 6.

“I’m very excited to be associated with this new KU series,” Washington said in a news release. “I feel that there are so many people of color that have contributed to our great university and it’s wonderful that we’re giving our fan base, alums and community and opportunity to learn more about them. This series will provide a legacy my family will be very proud of.”

Joining Washington in being honored this February are: John McLendon in Week 2, Curtis McClinton in Week 3 and current KU track and field coach Stanley Redwine in Week 4.

A two-time Naismith Memorial Basketball Hall of Fame inductee (in 1979 as a contributor and in 2016 as a coach), McLendon was the first African American to earn a physical education degree from KU in 1937. McLendon also helped integrate the Robinson Gymnasium swimming pool while he was a student at KU.

McClinton, whose name is in the Kansas Football Ring of Honor, was among the first African American football players at KU.

After graduating from KU in 1962, McClinton was drafted by the Dallas Texans (now the Kansas City Chiefs) and later became the first AFL player to score a touchdown in the Super Bowl.

Redwine, who is currently in his 20th season as the head coach of the KU men’s and women’s track teams, has coached 12 individual national champions, 76 first-team All-Americans and eight Olympians. In 2013, he coached the KU women to their first outdoor national championship.

He recently was named a Team USA coach for the 2020 Olympic Games in Tokyo.

“We are proud to create this new series honoring the trailblazers who were paramount in furthering the African-American student-athlete advancement here at KU and beyond,” KU Athletic Director Jeff Long said in a news release. “Marian Washington’s impact is evident when you read and hear stories from those she influenced and how it extends far beyond sports. Many young women have benefited greatly from her sacrifices and efforts. She is the definition of a trailblazer and we are pleased to properly name this the Marian Washington Trailblazer Series.”

I was a student at KU from 1988 to 1992 (yes I was there for Danny and the Miracles). My roommate and I were huge supporters of both the men's and women's basketball teams. If you were there then, you may remember the Bleacher Bums that sat behind the basket near the home bench decked in yellow shirts.

Anyway, I had the good fortune to get to know Coach Washington during those years. I was not a player on her team, or even on the practice squad, but she still inspired me. Her work ethic and her knowledge of the game were hard to match, but her motivational speeches were off the chart. I still remember when she hung a sign over the women's locker room door that read "94x40ww". Translation: Playing hard for 94 feet for 40 minutes will win. I took that message to the soccer pitch as a coach and used it to motivate my players.

More than that, I know from talking to the ladies on her teams back then, that they really looked up to her. Coach W was more than a basketball coach to them, she was a life coach. I love that the university is going to start recognizing the contributions of these individuals to the success of our alma mater and I cannot think of anyone better to start with or to name the series after. Coach W is the best!

I hope these people are being well vetted. I have heard disturbing things about one of the February inductees. If true that person should not be included. Outside of that I am very pleased that KU is honoring such a great person as Coach Washington. Well deserved.