The newest member of Les Miles’ football coaching staff at the University of Kansas, Jordan Peterson signed a contract to become the Jayhawks’ safeties coach for at least the next two seasons.

Formerly the defensive coordinator and safeties coach at New Mexico, Peterson signed a deal that’s guaranteed for both the 2020 and 2021 seasons, and could potentially last four additional years, through the 2025 season.

The contract, signed Jan. 10, the day before KU announced his hiring, calls for Peterson to be paid a base salary of $200,000 a year.

According to USA Today’s list of salaries for FBS assistant coaches, Peterson made $171,050 this past year, during his third and final season on the UNM staff. 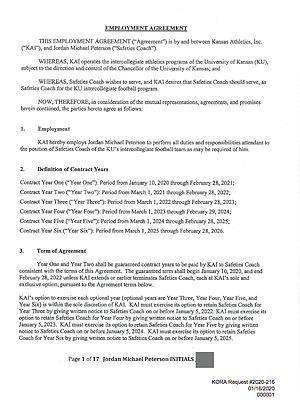 KU holds options to exercise each of the additional four years on the six-year contract, and must give written notice of that decision to Peterson on or before Jan. 5 in each option year.

The contract stipulates if Peterson wanted to resign and/or accept a new job elsewhere, it will cost him and/or his future employer a $400,000 buyout.

Just like the contract extension signed this past December by KU receivers coach and passing game coordinator Emmett Jones, teams would have to pay KU the equivalent of two years of the assistant’s salary to hire him away.

Also similar to Jones’ deal, KU agreed to allow Peterson to leave without a buyout only — a word that is capitalized for emphasis in the contract — if the coach is accepting a head coaching position at an FBS program.

Peterson also could receive in any given year the highest possible of the following noncumulative incentive bonuses tied to KU’s success. The amount comes as a percentage of his total yearly salary figure ($200,000):