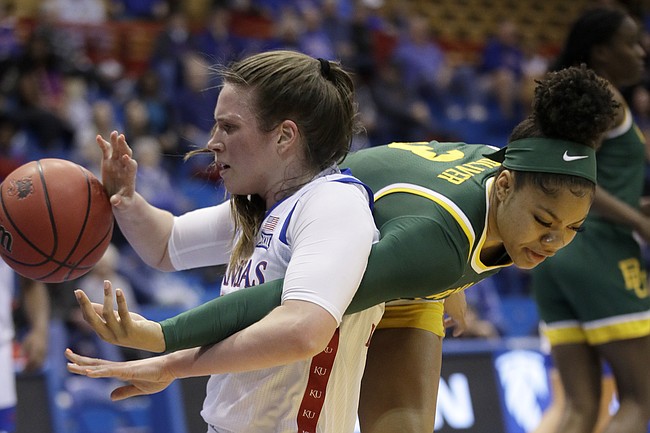 Even under the best of circumstances, the Kansas women’s basketball team had a tall task on Wednesday.

Kansas started slow and never had a shot in a 90-47 loss to No. 2 Baylor in Allen Fieldhouse. The Jayhawks were buried by a 28-9 deficit in the first quarter and the Bears proceeded to post a 22-6 advantage in the second period.

KU finally recorded a double-digit scoring effort in a quarter in the second half, though the result had all but been decided by then. With the loss, the Jayhawks remain winless in Big 12 play after going undefeated in the nonconference slate for the first time since the 2005-06 season.

With the win, Baylor matched a program record of 44 consecutive victories against Big 12 foes in the regular season. 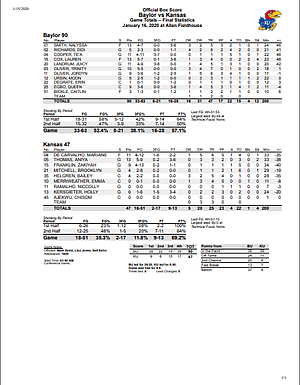 A pair of players produced double figures for Kansas (11-4, 0-4 Big 12) in a losing effort. Sophomore guard Aniya Thomas went 5-for-9 from the floor to lead the team with 13 points. Senior forward Mariane De Carvalho netted 11 points on a 4-of-12 effort on the night. Sophomore guard Brooklyn Mitchell finished just shy of double figures by adding 9 points.

Baylor (14-1, 3-0) had five players end up in double figures, including four of its five starters. Senior Lauren Cox and sophomore NaLyssa Smith each scored 13 points to lead the way. Starters Te’a Cooper and Juicy Landrum both recorded 11 points for the Bears. Freshman Jordyn Oliver provided 10 points off the bench.

BU finished with 22 assists as a team on its 33 field goals, while KU tallied an assist on four of its 18 made baskets. The Bears also finished with a 20-6 advantage on second-chance points and recorded a 12-4 edge in steals in the lopsided win.

Kansas will play host to Texas Tech at 5 p.m. Saturday.

Lucky this was a home game. On the road, it might have gotten out of control.

There has been no progress in the performance of the program under this head coach. The team is stuck in the mud. Cut this guy lose.

Don't expect to beat teams like Baylor, but I do expect we should be more competitive by now. Doesn't do any good to go undefeated in non-conference if we can't win a game in conference play.

Baylor is making everybody look bad this year. I have no problem with this loss given the turnover of personnel and losing our best two players before the season ever started. However, a couple of losses in the BIG XII this year we were either ahead or within 4 points in the 4th quarter. We have to find a way to win those games. I think with experience and getting the losing mentality out of their heads will go a long way.

2 best players? One had never played a college game(and wasn't the highest ranked of the recruits...).