Kansas' Marcus Garrett (0) shoots between Oklahoma's Jamal Bieniemy (24) and Kristian Doolittle (21) during the first half of an NCAA college basketball game in Norman, Okla., Tuesday, Jan. 14, 2020.

That’s what made Tuesday’s 66-52 win at Oklahoma so special for Self.

Playing without starting point guard Devon Dotson, who missed the game after suffering a hip pointer last weekend, Self watched junior guard Marcus Garrett slide effortlessly into the role of team leader both before and during the road victory.

In 38 minutes, on two bad ankles, Garrett delivered 15 points, five rebounds and five assists while turning it over just once and handling the ball the majority of the time.

“He’s tough as nails,” Self said of Garrett before moving his praise into superhero territory. 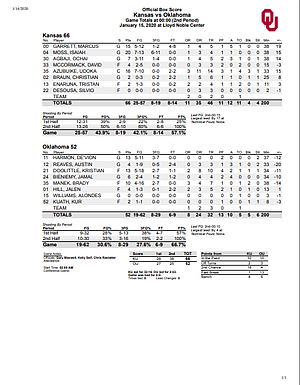 Early on, it was Garrett’s passing ability that stood out. On a night when senior guard Isaiah Moss knocked in 6 of the 11 3-point shots he attempted, it was Garrett who found him for his first two makes early in the first half.

Garrett said that was by design, as he knew that the sixth-ranked Jayhawks (13-3 overall, 3-1 Big 12) would need an offensive lift to replace the 18 points per game that Dotson gives the team.

“Of course,” Garrett said. “I was telling him, the way they play defense, sometimes they can over help and he’s wide open. I was just telling him, ‘Shoot it every time that you get it.’ I feel like every time he shoots the ball it’s going in. And when they do go in, I’m not surprised at all.”

Fueled by Garrett's confidence and guidance and fired up by the opportunity, Moss was the most aggressive he has been in a Kansas uniform, tying a career high with the six 3-point makes and finishing with 20 points to help offset not having Dotson.

“Playing without Dot didn’t hurt us as much as what you think it would,” Self said. “Because I thought Marcus was really good at the point.” 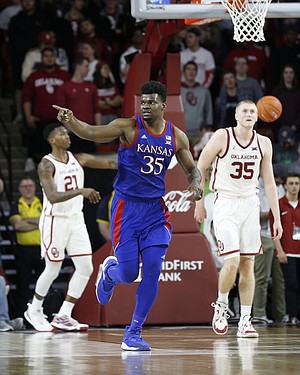 But neither Self nor Garrett cared about anything other than the tally in the win column after the game.

“He’s a stud,” Self said of Garrett. “You know, say what you want to; he doesn’t make his free throws, he doesn’t shoot the ball at a great percentage, you know, all that stuff. All he does is just win and give you a chance to win.

“The 3 he made in the corner and how he didn’t turn it over and how he controlled the game, you know, he’s a good player. He’s kind of a jack-of-all-trades type kid, but I thought he and Isaiah and (Udoka Azubuike) played at a pretty high level tonight.”

Azubuike, who finished with 14 rebounds, reaching double digits in that department for the fifth time in the last six games, added 16 points to his final stat line and played the kind of suffocating defense, both in the paint and on the perimeter, that Self loves from any of his players, let alone one who stands 7 feet tall.

As for Garrett’s assessment of his own game on Tuesday night, the junior guard was most pleased with the win and then about his ability to value each possession without Dotson on the floor to help him.

“I tried not to turn the ball over,” Garrett said. “That was my main focus ... to take care of the ball.”

Now that he’s done that, he thinks what he proved Tuesday can help Kansas both while Dotson is recovering and when the two are at full strength.

“(I proved) that I can run the team, basically," Garrett said. "I can do what he does when he’s not in and I think we can use that going forward,"

The only downside to Garrett’s night came when he tweaked his already-injured left ankle in the final few minutes. That was the one he hurt at Iowa State, but Garrett was not overly concerned about the injury, or having to play on it, after KU’s latest win.

“I’ll get back and do some more treatment,” he said.

As for how close he was to being 100% healthy in this one, Garrett said he felt that way before the game, “but (not) once the game started.”

As for how he managed it, that was simple.

“Knowing that’s something that I have to do when we’re without our point guard, I had the mindset going in that I was going to have to play a lot of minutes,” he said.

The more you heard Garrett’s teammates talk about his performance at OU after the win, the more fitting Self’s Batman analogy seemed.

“It was really big,” KU freshman Christian Braun said of Garrett’s steady game. “Thirty-eight minutes by probably the best defensive player on the court, and he had the ball in his hands all the time on the offensive end, there’s not many players in the country that can do that. It takes a lot. Especially to do that on one leg, or half a leg since both ankles are injured. He did a really good job.”

Garrett indeed showed why he's the best leader in the team. We can see his play is contagious, too. Team starts playing good passing once Garrett starts it. That is very important moving forward. Sure Dok still causes TOs trying to pass to McCormack, but that can be corrected - throw it high instead. This team will be more fun to watch once they trust each other like that. I always believe we should at least rack up 15-20 assists per game to be called a good basketball team.

Where are all the Garrett haters now? I can't remember their names but there's been a few negative comments in the past about his lack of shooting ability and how he should be benched so the freshman could take his place.. Anyone of you want to come own up? Way to go Marcus Rock Chalk!

I think a lot of the negative comments were from the last two years, particularly his freshman year.

How fortunate is Kansas now to have a third year starter able to run the team? Not only as a backup point guard, but as a defensive coach on the court, and a steady, calm force when the game is tight and/or on the road.

There's been a couple times this year I've read a few negative comments about Marcus calling for Braun or Enaruna to start in his place.

I was at the game and OU hacked Garrett every time he drove. They called maybe 2 fouls on OU. Even though KU won, the refs were very inconsistent. They called Dok for a lot of petty fouls.

I was surprised OU didn't press a little bit last night. OU(Larry Bird jr) missed a lot of open shots last night. Garrett is a "gamer". He probably does all the small things better because of his shooting ability but the kid gets how to play the game. Hope Moss is encouraged by last night and takes a couple more 3's a game.

More like "Spider" Man with that hair style than Batman. 👍😁👍

I've felt for quite awhile that Marcus Garrett was an underrated player and overlooked when it comes to talent. He was a STUD in his senior season of high school and carried his team to the state 6A semifinals, averaging 17 points a game. Apparently, due to his size, previous coaches wanted him to play forward/center. His high school coach put him at the 1/2 spot, believing Garrett to be far better suited to play guard.

Keep it up Marcus! You are a much loved and respected Jayhawk!

That's the Marcus Garrett I really wish to watch during each game! Like he did to TTech last year. That's so freakin' awesome! But he doesn't dunk anymore, which is foolish. Doesn't he realize that dunking is one way to elevate his game, surely to be noticed by those scouts? I hope he's not injured.

He's had trouble with ankle sprains since he's been a Jayhawk. Those never really heal fully. Plus he's known as a driver and finisher now that he's been around for three years teams don't like being dunked on. Agbaji was dunking all over people last year, but not as much toward the end last year an this year. I just think the more film is out there of a player coaches make adjustments in how they play them.

Not Surprised. Marcus is a Point Guard not a shooting guard. Maybe he should be playing the point all the time. Puttin our best defender against the other teams PG is not a bad idea. Plus, maybe Dotson playing SG would be better for him. Moss put in 20 first time out with Garrett feeding the ball. Hmm.

However, KU is ranked in the top 10 overall but we are ranked like 177th in turnovers per game. We average over 14 turnovers per game. In this game ww had only 11 and it was Dok that TO'd the ball 4 times. Garrett only once. But, a good ball handling team should average less than 10 and once in a game with just 6 or 7. So far.....not happening.

I’m one of the ones that has never been big on Marcus Garrett, but he’s stepped up this season as his role has been more clearly defined. If Marcus Garrett felt like “Batman”, then Isiah Moss was “Superman”.

On this team, Garrett is playing with confidence and certainty. He’s not having to play out of position at the 3 or 4, which means he’s able to play to his strengths - penetrating the lane and utilizing his mid-range game.

Garrett is an “attacking facilitator” whom plays most effectively as a point guard because he just doesn’t have a reliable outside shot. He can penetrate and dish as good as anybody, but he hasn’t been able to “finish” until this year. If he continues to be the veteran leader and embraces team ownership, Marcus Garrett can seal his place as a Jayhawk Nation legend!