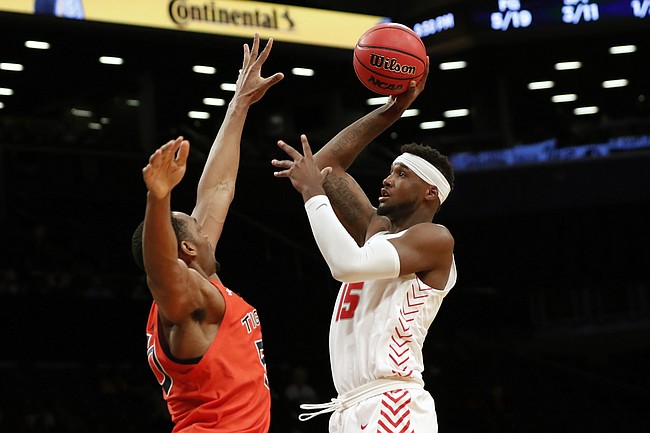 ALBUQUERQUE, N.M. (AP) — New Mexico forward Carlton Bragg Jr. has been dismissed from the Lobos basketball team following his arrest on suspicion of driving while intoxicated and possession of less than an ounce of marijuana.

“The game of life is much more important than basketball right now,” Weir said. “I still believe in him and hope this next step will allow him to develop into a strong, responsible young adult while also completing his degree here at UNM.”

The arrest came nine days after Bragg, 24, was reinstated to the team following a three-game suspension while university officials investigated sexual misconduct allegations against him by another student. Bragg has not been charged in connection with that incident, which occurred in August, although the Bernalillo County district attorney’s office sent the case to the district attorney’s office in Alamogordo because of a conflict of interest.

Bragg, who was averaging 12.6 points and 10.3 rebounds in 15 games in his second season at New Mexico (15-3), was released from custody later Sunday.

He was detained around 1:20 a.m. in Albuquerque at a sobriety checkpoint, according to a police report.

Officers saw that Bragg “had bloodshot watery eyes and an odor of alcohol emanating from his facial area,” the report said. “Carlton admitted drinking 2 glasses of wine between 9 p.m. and 10 p.m.” The Lobos had beaten Air Force only hours earlier.

Bragg was put through field sobriety testing and “signs of impairment were present during his performance of the sobriety tests,” after which he was arrested and a small amount of marijuana was discovered on his body, the report said.

It was not known if he had an attorney who could comment on his behalf.

New Mexico is Bragg's third school. He played at Kansas, where he was suspended after being arrested and charged with battery against a woman in 2016, although that charge was dropped and the woman who made the claims was later charged after prosecutors reviewed surveillance video.

He also attended Arizona State but was removed from the team in his first semester for violating an unspecified team rule.

Bragg had 11 points and seven rebounds Saturday night in the Lobos' 84-78 victory.

Poor guy, apparently has a lot of issues.

Man, very few people get as many chances to get their sh*t together as Carlton has had. He needs to figure out what he wants from life. He was averaging 12pts and 10 reb so far this year for UNM! So much talent, so little personal responsibility. I wish him nothing but the best and hope he is able to figure things out for himself.

Glad he's not at KU anymore.

Who cares about basketball. This kid has some serious issues he needs to deal with, basketball being the least of his worries. Sounds like he needs to go to some sort of rehab that deals with his issues. Money and fame won't make this go away and will probably make it worse. I'm all for second chances but at some point you have to know when someone is a cancer to your program and life. Clearly there were other issues or he would be given the chance to defend himself. Guessing he was on a short leash and this was the final straw. Yes I'm speculating but he's clearly had issues everywhere he's been enrolled. Pretty sad.

When you get the number of chances this guys has -- how many transfers is that now? -- and you still don't learn from it... you've got issues.

To think how highly touted this guy was coming out of high school, compared to where he's ending up is pretty amazing.

You always hope for the best with these types of young men. But you know fully well that this story probably doesn't have a happy ending to it.

KuSports needs to get the link fixed, I clicked on the site and it took me to New Mexico basketball news for some reason.

Hope he gets well.

This really saddens me. I was SO excited for him going into his Soph year here. Seemed to relish his time in the games with such a great attitude as a freshman. It IS bigger than basketball and prayers from CO here for Carlton.

He was just another KU recruit with issues. He left here with issues and still has them

Yes and no other schools have recruits with issues. Most times when there is a legitimate issue, Bill handles it properly. In this case allowing Mr. Bragg to go play elsewhere.