Kansas head coach Bill Self gets the attention of his players late during the second half, Saturday, Jan. 4, 2020 at Allen Fieldhouse.

Less than a week after shooting 41% from 3-point range in a road win over Stanford, the third-ranked Kansas men’s basketball team returned home on Saturday and could not buy a bucket from the outside.

In Saturday’s 60-53 victory over No. 16 West Virginia, the Jayhawks shot just 3-of-17 from 3-point range and made what KU coach Bill Self recalled as, “three shots outside of three feet,” yet found a way to come out on top.

“To still win that game, when you go 19-of-30 from the (free throw) line, that speaks to, if you just hang in there and guard, you still have a chance regardless,” Self said.

Self acknowledged that the Jayhawks will need to do better in the weeks ahead if they hope to be a player in the Big 12 race. And he named three players who should help the Jayhawks get there.

“We’re not going to have a chance to have a special season unless Ochai (Agbaji) and Christian (Braun) and Isaiah Moss can shoot the ball from the perimeter,” Self said. “And today that didn’t happen.”

That trio combined to go 1-for-8 from 3-point range against the Mountaineers, with Agbaji making the only triple of the bunch, a dead swish from the corner that tied the game at 32-all early in the second half. 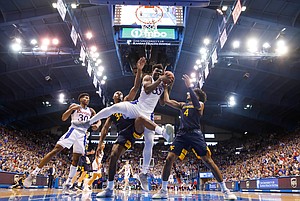 Agbaji’s lone 3-pointer came on the possession after he broke up a long-distance lob attempt by the Mountaineers in transition.

Despite his struggles from the outside, the KU sophomore still played nearly 38 minutes on Saturday. Moss, on the other hand, logged just 7:31 on the court after leading the Jayhawks with 17 points and a 4-of-7 clip from 3-point range last weekend against Stanford.

“We’ve got to get something out of Isaiah,” Self said. “And if we’re able to do that, I think we could be a pretty good offensive team.”

The last time the Jayhawks lost a conference opener came during their Big Eight days, when they fell at Oklahoma on Jan. 8, 1991.

While KU kept its streak going, the third-ranked Jayhawks also put an end to a West Virginia streak. Saturday’s setback was the Mountaineers’ first loss in a conference opener away from home since they joined the Big 12 Conference in 2012.

In a partnership with Coaches vs. Cancer and the American Cancer Society, Self announced Saturday that he will donate $2,000 for every KU home victory on behalf of the KU students for the rest of the 2019-20 season. 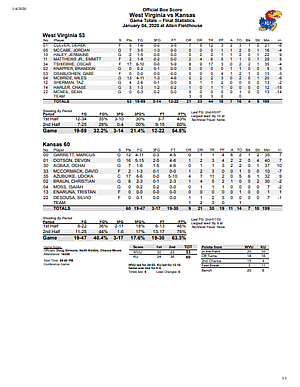 In addition to his donation, which is designated for pediatric cancer research, Self issued a challenge to businesses, corporations, individuals, and anyone else interested in donating, to match or beat his total donation at the end of the season.

Those organizations and individuals who do will be invited to an end-of-the-season reception with Self and the KU staff for their involvement with the effort.

“We have the best student body and homecourt advantage in the nation, and take pride in winning at Allen Fieldhouse,” Self said. “I’m looking forward to our fans having another reason to cheer and be loud knowing that a home victory is also going towards raising money for cancer research.”

Those interested in matching or topping Self’s contribution should contact the American Cancer Society in Kansas City, Mo., at (816) 218-7154 or via email at: lauren.gruber@cancer.org.

KU now leads the all-time series with West Virginia, 13-5... Kansas now has trailed West Virginia by double digits in seven of the past 13 meetings between the two programs. As they did on Saturday, the Jayhawks came back to win five of those seven matchups... KU led for just 13:26 of Saturday’s victory, a season low... Saturday marked the first time since 2006 that KU won a game at Allen Fieldhouse when scoring 60 points or less... West Virginia’s 53 points were the fewest by a Kansas opponent this season and the Jayhawks have held seven of their 13 opponents so far this season to 60 points or fewer... Saturday’s sellout marked the 297th consecutive time that 16,300 tickets were sold at Allen Fieldhouse... KU also extended its current home-court winning streak to 28 games in a row... WVU freshman Oscar Tshiebwe’s 17 rebounds were the most by a Kansas opponent in Big 12 play since Texas’ Jarrett Allen grabbed 19 boards in January 2017.

"We’re not going to have a chance to have a special season unless Ochai (Agbaji) and Christian (Braun) and Isaiah Moss can shoot the ball from the perimeter" - Thanks, coach, I hope you stay at KU forever!

I see Thuggy Bear is still bitching about the officiating. Hey Thuggy, when you blow double-digit leads against us every time you play us, maybe you should blame the guy you see in the mirror instead of the refs!

As to Huggins and the officials, I thought his comments in the video link above were pretty fair. 3 officials, each seeing the game (and fouls) a different way. Then depending on their positioning from one end of the court to the other, a foul inside is dependent on who is standing under the basket.

Don’t get me wrong, for as it was stated in the CBS report - KU was whistled 19 times to WVU 18 times. There was absolutely NO discrepancy between the two teams. Yet there was a huge discrepancy in ‘what is determined to be a foul’. And that sucks. It isn’t fair to either team and none of the players.

Solid win. Defense in 2nd half the difference. KU is a different team when Garrett is not on the floor. He is the intangible difference maker. Rock Chalk!!

Our guards are just plain afraid to shoot the three. And I think that’s on coach. It’s entirely possible that offensive philosophy is what leads us to consistency and all of these conference championships but it is also what tends to fail at tourney time. And we see that we get upset by teams with nothing to lose that just let it fly from three.

Coach should learn from Izzo.