Manhattan — The rematch proved to be more interesting, at least from a basketball perspective.

In a back-and-forth battle, No. 1 Kansas ultimately prevailed with a 62-58 win over Kansas State Saturday afternoon at Bramlage Coliseum. The Jayhawks cruised to a 81-60 win over the Wildcats in the first meeting on Jan. 21, though an all-out brawl ended up being the biggest storyline from that game.

This time around, it was all about basketball. Before the game, players from both teams shook hands. And the rest of the day was slugfest between in-state rivals, who happen to be on opposite ends of the Big 12 standings.

Sophomore point guard Devon Dotson provided plenty of offense for the Jayhawks on a night where they struggled to get much going on that end. Dotson poured in a game-high 25 points on 8-of-11 shooting from the floor. He went 8-for-8 from the free-throw line.

No other Kansas play finished in double figures. David McCormack, who filled in when Udoka Azubuike was hobbled, finished with 9 points in the win. Azubuike did not play the final 6:23 of the contest after appearing to tweak his ankle again. 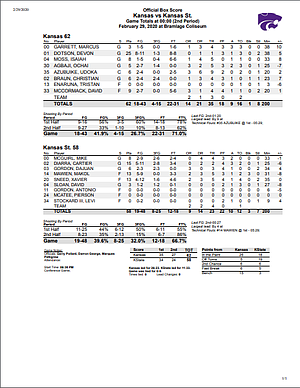 • The game turned when: With 7:57 left to play, Kansas State evened the score at 48-all. And then the Jayhawks put the game away.

Kansas scored eight unanswered points to create some breathing room. Dotson hit a few freebies at the charity stripe and converted on an and-one opportunity. Freshman Christian Braun splashed a 3-pointer as well.

In the end, it was a stretch that helped Kansas claim its 12th win in the last 13 matchups with Kansas State.

• Defensive highlight: There was a stretch in the first half where Kansas proved why it is considered the top-ranked team in adjusted defensive efficiency on KenPom.

Cartier Diarra opened the game with a 3-pointer, but Kansas State proceeded to miss its next nine attempts from the floor. The Wildcats were held without a field goal for over seven minutes in the first half.

It was a run, as clunky as it may have been, that allowed the Jayhawks to get out in front and take control of the game early on. 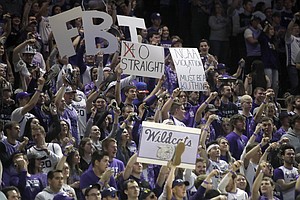 • Offensive highlight: Devon Dotson shouldered more responsibility after Azubuike went down with an injury in the first half.

There is certainly a case to be made that both players should be considered for Big 12 Player of the Year. But when Azubuike was sidelined for nearly a seven-minute stretch in the first half, the sophomore point guard took over for KU.

Dotson repeatedly drove by K-State defenders, and finished through contact at the rim. At one point, Dotson scored nine consecutive points for the Jayhawks. Azubuike eventually checked back in, but it was an important stretch for KU.

• Up next: Kansas will play host to TCU on Wednesday.

Great win! We probably needed a dog fight like that. With Baylor going down at TCU, we are all alone at the top. Need to work on our TO's. Ochai and those soft passes drive me crazy. But most of all, get well Dok!

It’s a road win so I’ll take it but it was a lot closer than I expected. Have to give K-State credit for playing a good game. They had us out of rhythm all afternoon.

I would have left Doke out of the game entirely. If we lose we lose but we need him for the tournament. Dumb decision by coach.

I understand that position, but on the game, the announcers said that with a minor sprain like that, it is better to get rewrapped in the locker room, then come out and keep it from getting tight. I'm no doctor and don't know if that is true, but that is why they felt it was right for him to come back. You could tell he was not going 100%, just basically moving around. We are so lucky to have DMac. He has a sweet mid-range jumper and really was our best player out there behind Devon.

With a sprained ankle, the damage is done so you basically go as long as you can and then once it swells, you're toast until it goes back down. So to maximize the minutes you get out of him, you play him before it swells.

Hopefully it is not a high ankle sprain. If Dok is out we only have one bid and that is Mac and he can not make it through= a whole game without fouling out!. Just another time De Sousa is hurting the The team

The dominance continues!!!! Jayhawks own Bramlage. Only 5 losses to the mildcats there.

Looked like lots of empty seats behind the baskets.

Why did they abandon Ahearn?

On the one hand, I'm glad we won and that TCU beat Baylor; but on the other hand, I'm disappointed that we only beat KSU by four points. We barely beat the team that sits in last place in the Big 12. It's scary to think how vulnerable we are when Udoka is in foul trouble or injured.

But nobody really showed up to play but Dot. Garrett was poor offensively & just OK on D. Ochai, well, he's what I would say is just, Ochai, a soft-passing, soft D guy that can score on the occasion. McCormick played really well and Dok wasn't that effective when he was in, again we couldn't get the ball in to him. All that said, I would've been happy with a 1 pt win!

Rumor has it De Sousa was on edge watching the game at Allen Fieldhouse throwing stools everywhere....

Wild day in the Big 12. TCU over Baylor, OU over West Virginia, and UT over Tech. Some teams making their case for tournament invitations.

1) Dotson is even more in the lead as the MVP in my opinion after this performance.

3) As I said before, the only chance KSU had was for them to rely on their Defense AND hope that KU shoots bricks. That pretty much happened. KU had runs (both O and D) and the right time to get the W. That is the sign of a truly tough team.

4) Agbaji is the most confusing player of the year. At times he makes brilliant, athletic plays. And other times, he just looks lost in the sause. He very well may have the highest NBA ceiling of any player on the roster, but right now, he can be painful to watch at times.

5) Baylor lost to TCU. Take care of business the next two games and it's back to normal in the BIG12.

West Virginia and Texas Tech will make you scratch you head picking how far they’ll go in March.

The BigXII is returning to normal, somebody looks threatening and then a nobody knocks them off.