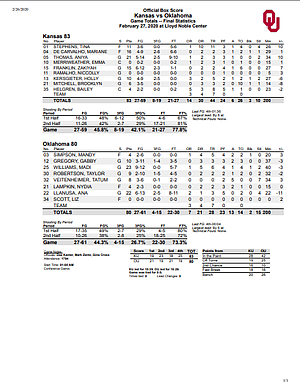 Oklahoma was led by a 23-point effort from Madi Williams, who went 9-for-12 from the field. Ana Llanusa tallied 22 points in the loss, while Gabby Gregory added 10 points. But the key to KU’s win in the rematch was holding sophomore Taylor Robertson to just 9 points on the night.

Robertson, a McPherson native who poured in 31 points against KU last time out, didn’t hit her lone triple until the final minute of the contest.

Kansas will play host to Oklahoma State at 5 p.m. Saturday.

Congratulations, Jayhawks! Don't look now, but that's two out of the last three.

I must give the team credit for winning in Norman. Now the Coach has averaged two conference wins in each season he has been at KU.

These young ladies will have a lot of returners next year. Add in 2 of their better players that were out all year with injuries, plus their recruiting class and I think we “could”, I say again “could” be competitive in the BIG XII next year......excluding Baylor. I’m just not sure if the administration gives our coach another year or not.

Nothing better than beating Sherri Coale. OU fans can't stand her either!