Kansas forward David McCormack (33) follows up a missed shot with a dunk during the first half on Monday, Feb. 24, 2020 at Allen Fieldhouse.

Fresh off a 3-point win in Waco, Texas, on Saturday over then-No. 1 Baylor, the Kansas Jayhawks on Monday morning moved into the No. 1 spot in the Associated Press Top 25 poll.

Then they went out and proved they belonged there with a 83-58 home victory over Oklahoma State at Allen Fieldhouse.

Kansas, which sits at 25-3 overall and 14-1 in Big 12 play, jumped two spots in the latest poll that was released Monday morning. The Jayhawks received 62 of the 64 first-place votes handed out this week. Baylor received the other two.

Although one of the Big 12’s top two teams wound up on the losing end of the recent showdown, Saturday’s KU victory turned out to be a win-win for the conference. Despite the loss — its first in its last 24 games — Baylor fell just one spot to No. 2, and the Big 12 now owns the top two positions in the current AP poll.

"I do think we earned it," Kansas coach Bill Self said after Monday's victory. "But I watched the games Saturday, with San Diego State and Gonzaga and it didn't matter to me who won those games. If somebody else was No. 1, I think I'd be OK with it. I think that we put ourselves in a pretty good position, that if we take care of business, we're going to be in a favorable spot from a seeding standpoint. But we're still a long ways away from taking care of business."

Gonzaga, like Baylor, which lost over the weekend, dropped a spot to No. 3, and Dayton (up one) and San Diego State (down one) round out the new top five.

The Jayhawks’ jump to No. 1 in the latest AP poll was hardly a surprise. Not only did KU knock off the No. 1 team on its home floor last weekend, but the Jayhawks also are ranked No. 1 by KenPom.com, No. 1 in the NCAA Tournament Evaluation Tool rankings, No. 1 by KPI and Sagarin and also have the most Quadrant 1 wins of any team in the country and the most Quadrant 1 and 2 wins of any team in the country.

KU’s strength of schedule also ranks No. 1 per KenPom.com, giving Bill Self’s Jayhawks the most complete and well-rounded resume of any team in the country and in Kansas team in a long time. 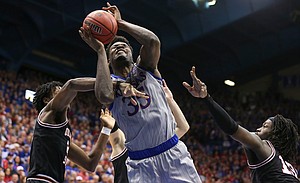 Even with that, the Bears were just a possession or two away from sweeping the Jayhawks, making their soft landing at No. 2 more than justified, according to KU point guard Devon Dotson, who praised the Bears after Saturday’s victory.

“Both teams really defend,” he added. “They make it tough each and every possession on you and there’s just that respect (between us). Just many different pieces, a lot of versatility out there on the floor, a couple great teams collectively that can execute game plans. Just two great teams going at it.”

KU now has been ranked in 217 consecutive AP polls, bringing the Jayhawks closer to eclipsing UCLA’s all-time record of 221 consecutive weeks in the AP Top 25.

Player of the Week

Monday morning got off to a pretty good start for Kansas senior Udoka Azubuike.

Following his 23-point, 19-rebound effort in a win at then-No. 1 Baylor over the weekend, KU’s 7-footer learned that he had won a trio of player of the week honors.

In addition to being named the Big 12 Player of the Week for the third time this season, Azubuike earned national player of the week nods from the Naismith Trophy and @MarchMadness.

Azubuike’s big game against Baylor marked his 12th double-double of the season. For the week, he averaged 18 points and 13 rebounds while shooting 80% from the floor in victories over Iowa State and Baylor.

On nearly every national player of the year watchlist, Azubuike leads the NCAA in field goal percentage at 74% and also leads the Big 12 in rebounding at 10.1 boards per game.

Azubuike is the only player in the Big 12 currently averaging a double-double. 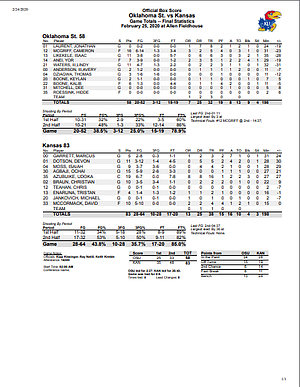 Former Self staff member Barry Hinson, now in his first year as an analyst at Oklahoma State, was back in Allen Fieldhouse on Monday night with the Cowboys.

Hinson, who spent four years as KU’s director of basketball operations from 2008-12 before going on to be the head coach at Southern Illinois for seven seasons, was in the building for the first time since the night after the 2012 national title game.

Prior to Monday’s tipoff, Hinson recalled that night, when the Jayhawks walked onto the floor through the southwest tunnel to a rousing ovation from their home fans after falling to Kentucky, 67-59, in New Orleans.

“How about that,” Hinson said. “That’s a pretty special memory.”

Monday night’s pregame hype video featured an entire 60-second intro devoted to last weekend’s win at Baylor. The video also included a 20-second encore of clips from Waco, Texas, after starting lineup introductions... The Jayhawks wore alternate uniforms during Monday’s victory. The all-gray look with crimson and blue trim and numbers was in honor of Black History Month. The look also featured a black shooting shirt, with the word Jayhawks written vertically down the center of the back in gold and Kansas Basketball emblazoned on the front. A few Jayhawks completed the ensemble by wearing special Adidas shoes designed to pay homage to the Tuskegee Airmen, who fought in World War II... Kansas now leads the all-time series with Oklahoma State 118-59, including a 64-12 mark in games played in Lawrence and a 49-10 record at Allen Fieldhouse... KU now has won 25 games for the 15th consecutive season, which extends an NCAA record... The Jayhawks’ 14 Big 12 wins marks the 14th time since the conference was founded that KU has won at least 14 league games... KU is now 14-1 in home games this season, 13-1 at Allen Fieldhouse... Former KU great Nick Collison was in attendance on Monday night.

Wow....Two games in a row.....back to back great games from Dok, and Mac had 4 fouls in just 15 minutes while trolling McGiff and Boone into foul trouble.

"Mac Hack Attack!" I mean why not. We really can't play Mac too often because of the 4 guard offense and Dok is going to play over 30 minutes if out of foul trouble. So keep feeding Dok the ball on offense and then Dok plays it safe on defense and when Mac comes in Mac can just bang and hack and frustrate the other team into losing focus and getting into foul trouble.

If Dok stays out of foul trouble and we keep getting the other team's big men into foul trouble Dok's free throw shooitng becomes a non issue and KU dominates.

McGriff, thanks for waking up Devon 'the Fury' Dotson!!!

So Dayton is #4 in the polls now? Our win over them in the Maui Invitational looks more and more impressive!

Side note, I hate Oklahoma State, but I love their uniforms. They look like the kind that they wore under Eddie Sutton in the 1990s, back when OSU's program was actually classy and dignified. By contrast, I dislike the ugly gray uniforms we wore tonight - even if they were for "Black History Month". I'd rather see Kansas in crimson red, which is actually a school color, instead of gray, which, last I checked, was NOT a school color.

Bryce, I don't think Coach likes the crimson uniforms. Devonte requested them once his senior year, he'd never worn them, Coach told him ok, but they better not loose 😉. They didn't, but I haven't seen them since.

Bryce, grey might be a school color, but there is some tradition of having worn the “Phog” uniform before.

I miss the original "Phog" uniform with the handsome 1988 font. That was a good shade of gray.

The gray we wore against OSU feels like a darker shade of gray, and, combined with the blue, it just doesn't work for me.