In the first of back-to-back road games, the Kansas women’s basketball team was edged by West Virginia, 60-53, inside WVU Coliseum on Saturday night.

The Jayhawks fall to 13-12 overall and 2-12 in Big 12 play, while the Mountaineers improve to 16-9 and 6-8. But KU’s defense is what stood out to head coach Brandon Schneider on Saturday.

“I thought it was good defense by both teams,” Schneider told reporters in his postgame interview in Morgantown, W.Va. “I think you get late in the year, second time playing each other, a lot of material (is) out there for scouts. I thought both teams played very hard (and) very tough.”

KU started the game hot opening the first quarter with a 7-0 run. The run started with a quick layup from senior Mariane De Carvalho and was followed by a 3-pointer from sophomore Aniya Thomas on the next trip.

The run was capped off by two free throws from junior Tina Stephens. It was more than enough to help the Jayhawks grab a 12-4 advantage after the first quarter. In addition, it marked the fewest points an opponent has scored in any quarter against KU. 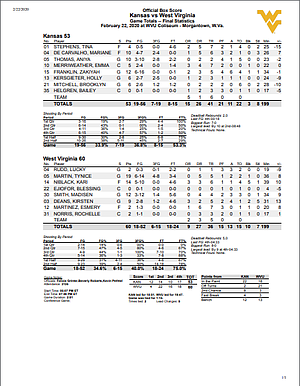 West Virginia responded by outscoring Kansas over the next two quarters, including a 22-14 edge in the second period, to ultimately take control of the contest. The Mountaineers had three players finish in double figures, led by a 19-point effort from Tynice Martin.

Freshman Zakiyah Franklin led the team with 12 points, six assists and five boards. Franklin has led the team in scoring on six occasions and in assists in 13 games. De Carvalho finished with 10 points on 4 of 7 shooting from the field.

Thomas scored 10 points in the game, which was the 20th time she has finished in double figures.

Kansas will travel to Oklahoma at 7 p.m. Wednesday.

To show how bad this coach and his program are consider that he needs 1 more conference win to reach an average of 2 conference wins per season for the five years he has been at KU.

It was a competitive effort on the road. (Sigh)

Do we still have a caring AD ?? Go find your school a great Basketball coach for the girls.