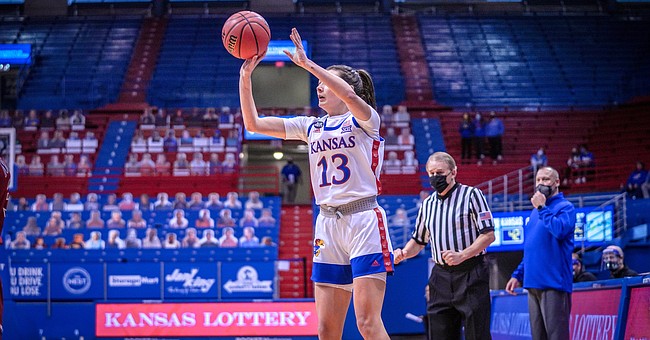 With three full days to prepare for New Mexico State, the Kansas women’s basketball team appeared to be in more of a rhythm Tuesday afternoon in Allen Fieldhouse. The Jayhawks never trailed on their way to a 78-59 win over the Aggies.

It was the type of statement that Kansas needed to make in its nonconference finale. Prior to the winter break, KU dropped a 72-69 decision to North Dakota State after having just one day of practice ahead of that matchup due to COVID-19 protocols.

“Having three days here after the break to be back in the gym and emphasize some things was really beneficial,” KU coach Brandon Schneider said. “I think that particular game was pretty evident practice and preparation is really, really important. That’s something we simply weren’t allowed to do.”

The Jayhawks (5-2) shot 45.5% from the floor and 85.2% from the charity stripe on 27 attempts in their win over the Aggies (2-5) on Tuesday. They had five players score in double figures, while producing a total of 32 points in the paint and 31 bench points.

About the only thing KU’s offense didn’t do well was take care of the rock. Kansas finished with the same amount of turnovers (25) as it had made shots against NMSU.

“When we didn’t turn it over, I thought we did a fairly decent job of executing,” Schneider said. “From an offensive perspective, I think we just have to do a much better job of taking care of the basketball. We turned it over at an entirely too high of a rate today.” 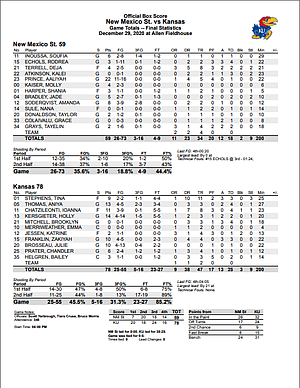 While the offensive performance was a stark contrast to the outing against the Bison, the interesting part was that the Jayhawks didn’t really focus on that area of the game the past few days.

“It was kind of the opposite,” sophomore Holly Kersgieter said. “Because practices have been so defensively (focused), we’ve had to come in the gym on our own and get those shots up.”

Kersgieter, who is the team’s leading scorer, led the way again with 14 points against New Mexico State. She missed the game against North Dakota State, but believes she can be better than what she showed in her 20 minutes of action.

“It was OK,” Kersgieter said. “Physically, I felt OK after going through all that. I didn’t shoot the ball well, but that team played fast.”

“I didn’t think I did too bad, but (it was my) first game back,” Kersgieter added.

Fortunately for Kergieter, she had plenty of help on an off night. Junior guard Aniya Thomas finished with 13 points in the win, knocking down all but one of her five field goal attempts. Thomas buried a pair of 3-pointers, as KU went 5-of-16 from long range as a team.

Freshman forward Ioanna Chatzileonti added 11 points and eight rebounds for Kansas. Sophomore guard Zakiyah Franklin and senior Julie Brosseau each chipped in 10 points off the bench for the Jayhawks.

Perhaps the best KU player of the game was senior Tina Stephens, who finished just shy of double figures by netting 9 points. Stephens collected 11 rebounds and had a +/- of +29 to lead KU in that category. No other player finished better than +16 for Kansas.

Stephens only took two shots, and made both of them, in her 25 minutes on the floor. She scored 7 points in the first quarter alone, helping KU set the tone by grabbing a 20-7 advantage after the opening period.

“She was extremely active and impacted the game in every phase,” Schneider said. “She was really active defensively. We have to get her more shots, and that will be something we will have to look at on film.”