Kansas defensive backs coach Chevis Jackson walks down the line as players get stretched during practice on Thursday, Aug. 8, 2019.

Two of the assistants Les Miles hired shortly after becoming the head coach of the Kansas football program are officially coming back for a third year on Miles’ staff.

Both Jackson and Drake signed deals in 2018 that were guaranteed through their first two years with the program, and KU needed to exercise its option for them to come back for a third season. 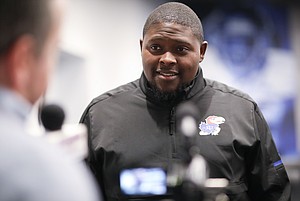 “Kwahn and Chevis have both been valuable members of our staff since they have arrived,” Miles stated in a KU release, “and we’re very happy they will be continuing with us. They both have shown a strong ability to teach and develop young players in their time here, and that is vital to our success as a program going forward.”

Jackson was set to make $165,000 in 2020, but as pointed out in USA Today’s annual report of FBS assistant salaries, he took a $6,188 reduction in his pay due to KU budget issues caused by the pandemic.

Drake, formerly an assistant at Colorado, signed a four-year deal with KU in 2018, with only the front half guaranteed — KU also holds an option for 2022 on Drake’s deal. The contract the D-line coach signed when Miles hired him stated his annual salary would increase by $30,000, to $380,000, if KU picked up its option for 2021.

Per USA Today, Drake didn’t take a pandemic related reduction in his salary this year.

Drake and Jackson, along with defensive coordinator D.J. Eliot and receivers coach and passing game coordinator Emmett Jones, are the only assistants still in place from Miles’ original staff.

Eliot signed a three-year deal with KU in 2018. After one year with the program, Jones signed a contract extension with KU in 2019 that is guaranteed through the end of the 2021 season. Jones’ deal could run through the 2025 season if KU exercises all four of the option years on the back end of his contract.

Seven games into his second season on Miles’ staff, offensive line coach Luke Meadows was fired in November, late in the final guaranteed year on his four-year contract that came with KU options for 2021 and 2022.

In that same offseason, two other assistants hired by Miles ahead of the 2019 season also left for new jobs: tight ends coach and recruiting coordinator Jeff Hecklinski, and inside linebackers coach and special teams coordinator Mike Ekeler.

Currently, only one vacancy exists on Miles’ coaching staff, heading into the new calendar year. Miles could potentially hire a new offensive line coach from outside of the program, after John Morookian (a senior analyst) handled the job on an interim basis after Meadows was fired.

Is there ever much discussion about analysts, senior or otherwise, that come to the program? I’ve heard that extra assistant non-coaches were one of the distinctions Saban brought from the nfl to cfb that helped established ‘Bama. I seem to recall the lack of staff support was previously a handicap that at least started to be corrected with Coach Miles. Coach Self seems to use it a lot with the network of coaches/GAs that he has come to know over the years.