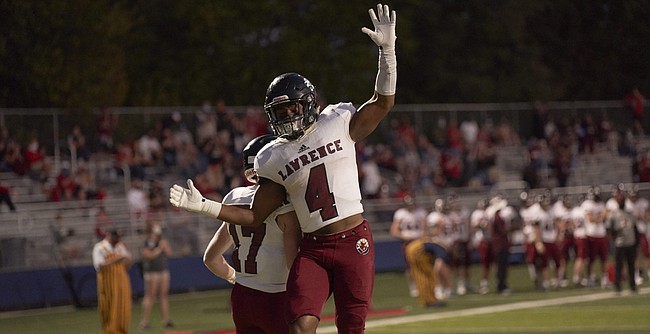 It was about 10 years ago when Freda McPhail first noticed that her son, Devin Neal, had what it takes to be a leader.

McPhail watched as Neal finished up his final lap at the end of a youth football practice at Holcom Park. Because of his natural speed, Neal was one of the first players done and he could have stopped right there. Instead, Neal saw that a few of the offensive linemen were struggling and decided to finish with them.

Neal motivated his teammates along the way, offering up words of encouragement to make sure they finished strong during those last few laps. When they got home, McPhail asked why Neal decided to run that extra amount.

“He said, ‘I didn’t want them to think that they were alone,’” McPhail said. “To me, that meant everything. It meant that he valued his team. That has (always) resonated with me.”

Neal, a senior at Lawrence High, has a superb athletic ability, and that is ultimately why he recently signed his national letter of intent to play both football and baseball at the University of Kansas. Neal, a running back, is the top-ranked recruit in the state in this class.

“Devin Neal will be a leader on our team,” KU football coach Les Miles said during his press conference on National Signing Day.

That’s not a label that Miles gives many incoming freshmen, but it does speak to the type of person that the Jayhawks are getting. Anybody who has ever met Neal has lauded him for his character, which is a testament to how he was raised by both Freda and Ryan McPhail.

Because of his parents, Neal’s first focus has always been on the academic side, to be prepared for life after sports. Aside from just one class where he got a B, Neal has been a straight-A student all his life.

As such, Neal is always quick to credit his teammates for his success. The 5-foot-11, 205-pound running back ran for 1,370 yards and 20 touchdowns during his senior season with the Lions. He was named Journal-World co-player of the year in 2020 after leading LHS during a 9-1 campaign.

Whenever he got the chance, though, Neal made sure to acknowledge that Lawrence’s offensive line helped create plenty of running lanes for him.

“The thing I love about him is that what you see in the interviews (with the media) is exactly him,” Freda McPhail said. “He’s true to himself, I think that’s the part I’ve absolutely loved. He hasn’t changed anything about himself. He’s humble (and) he’s selfless.”

In addition, Neal has always been the hardest worker on the team. Whether it was offseason workouts or reps in the weight room, Neal usually set the standard for the Lions. LHS went 1-8 in 2018, but posted a 17-3 overall record over the past two seasons.

“No one out works him,” LHS head football coach Steve Rampy said. “When you see the very best player in the room, (and) maybe in the state, working that hard, it holds you to a high standard.”

“It just makes people feel good to be around him,” Rampy added. “He’s going to do great things, there is no doubt in my mind.”

An example of that work ethic occurred this past summer during a baseball workout, according to Stoll. Neal had been bumped up to a four-star recruit on 247Sports the night before, and it garnered plenty of buzz on social media.

Rather than make a big deal of it, however, Neal showed up to a morning baseball workout at 9 a.m. and proceeded to work on base running drills with LHS.

“That just shows you who he is,” Stoll said of that day. “There are a bunch of examples like that. He wants to be with his teammates. He wants to lead.”

It is ultimately why Stoll wasn’t surprised when KU baseball coach Ritch Price called him after meeting with Neal. In the fall of 2019, Neal had a sit down with Price in the dugout at Hoglund Ballpark. It is something that Price likes to do with all the recruits and their parents.

“I just remember (Price) saying, ‘I got to have this kid in our program,’” Stoll said. “I just thought that was awesome because he felt the energy and he felt his caring nature. (Neal) is who he is. It’s not fake, it’s legit.”

How Neal balances both sports at the collegiate level still remains to be seen, but it is clear that he can have a major impact — on and off the field — on both programs at KU.

“It was important from the start, we created a great relationship with him and his family,” Miles said. “We’re thrilled. We think he is just what we need.”

Always like it when they do well in the classroom. Sign of good character. Can't wait to see this kid play.

Also read that we were in the final 3 (with Florida and OSU) for a WR that would be significantly better than any player ever.

The Jayhawks are coming!