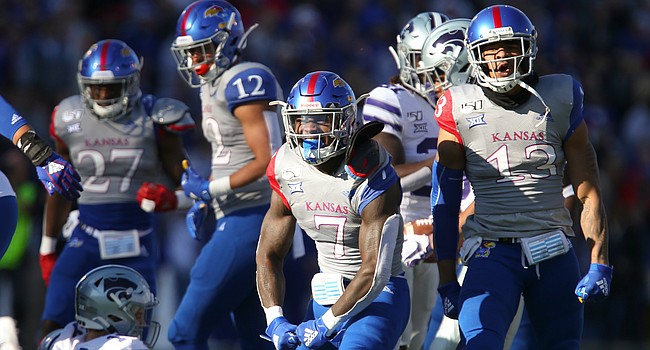 Just as Kansas football coach Les Miles indicated a month ago, safety Davon Ferguson won’t be back with the program in 2021.

The redshirt junior from Baltimore announced Friday night on his Twitter account he will be entering the NCAA’s transfer portal.

A starter in the secondary for the KU defense in each of the first four games this year, Ferguson first appeared on the team’s did not dress list for undisclosed reasons for the Jayhawks’ Oct. 24 road game at Kansas State. After a few more weeks of Ferguson missing games, when Miles was asked about the defensive back’s absence on Nov. 16 the head coach revealed Ferguson wouldn’t be coming back to the lineup in 2020.

“I don’t see his return, just to be very frank about it,” Miles added at the time regarding Ferguson possibly rejoining the Jayhawks in 2021.

Even though Ferguson missed the final five games for the Jayhawks (0-9 overall, 0-8 Big 12) in 2020, he finished sixth on the team with 27 total tackles. In what proved to be his final game in a KU uniform, Ferguson led the Jayhawks with nine total tackles in a loss at West Virginia.

Ferguson first played for KU in 2018, but redshirted that year as a junior college transfer from Hartnell College. He took on a more prominent role in 2019, after Miles and his staff came in. Ferguson started five games and played in all 12 in 2019 as a redshirt sophomore, and made 57 total tackles, with three tackles for loss.

Since preseason football began for KU in August, nine players who were on the roster have decided to leave the program and enter the transfer portal. Six of them were seniors and one was a walk-on.

Ferguson was one of five starters to leave the team during the season, along with running back Pooka Williams, linebacker Dru Prox, offensive guard Jacobi Lott and center Api Mane.

It only gets Greater Later I promise 🙏🏾 #7reasons🖤 pic.twitter.com/U2PmvekFb5

How in the hell are we going to cure the roster woes if we can't keep our players? Got to figure out how to keep the experience. Can't just keep rolling freshmen out on the field each year against a murderous Big XII schedule and experience growth and success.

We know Williams and Ferguson are not returning, what’s the status of Jacobi Lott and Dru Prox?

Get over it. The Transfer Portal is the nature of the beast moving forward. All teams are dealing with it and are losing/gaining players. Until we reach a higher degree of success the likelihood is that we'll be hit harder until the players have something to look forward to.

The coaches talk with the players about how they see their role next season. Coaches will encourage some to return and not so for others. What we don't know when a player enters the transfer portal is whether he is leaving because of what the coaches told him about his future here or whether he's leaving because he is disenchanted for some reason. Let's face it, some players we want to keep, others we figure we'll do better with those youngsters who gained all that experience this season. Or those coming into the program.

But he left before the season was over. A leading tackler just stops playing. It's no wonder we keep losing games when we have to fight COVID, injuries, and players leaving the program with a national championship caliber coach.

i must say that both Mangino and Mason had quite a number of subtractions in their first two or three years. Senority is not a talent in itself, and certainly our program is not one where you stay around just to basque in the glory.

We must accept the fact that some of the players just don't belong here, and cannot or will not make the step to the next level.