1 soccer player opts out due to COVID-19

Kansas soccer goalkeeper Sarah Peters grabs for the ball during a preseason practice on Aug. 5, 2020.

On the first day of preseason practices Friday, University of Kansas volleyball coach Ray Bechard made it clear to the Jayhawks that they have options.

“If you don’t feel safe, let us know,” Bechard told them. “This isn’t something that you have to do.”

Such is the new reality of trying to prepare for a season in the midst of a pandemic.

Practices began for schedules that don’t even yet have official start dates for both the KU volleyball and soccer programs this past week. Soccer coach Mark Francis told the Journal-World one of his players already has decided to opt out of the season due to concerns over COVID-19. 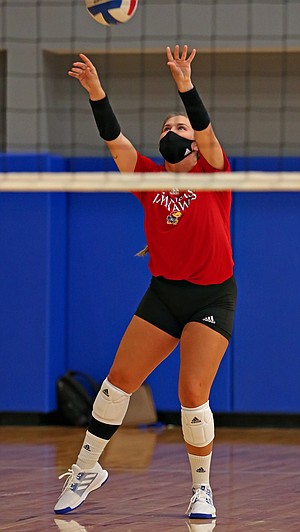 Kansas volleyball libero and defensive specialist Lacey Angello focuses on the ball as the Jayhawks practice in masks on Aug. 7, 2020.

Francis didn’t want to yet publicly announce which player made that decision, but the NCAA already has stated any student-athlete — in any sport — who reaches that conclusion must have her or his scholarship commitment honored.

Both Francis and Bechard admitted practices and all the typical preseason activities that come this time of year felt a little strange, given the circumstances.

“But once we get into it,” Bechard said, “and we’re trying to pass the ball to a certain place, you forget about the mask, you forget about all the stuff and start focusing on technique and coaching kids up and making the best atmosphere for them to learn in.”

Precautions abound for KU athletes and staff alike. For now, COVID testing takes place once a week, though that is expected to become more frequent once the season begins. 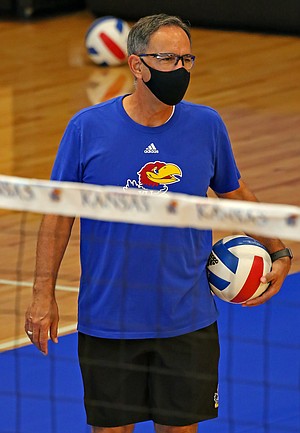 Kansas volleyball coach Ray Bechard speaks with his players from a distance during a preseason practice on Friday, Aug. 7, 2020.

Bechard said during his players’ recent summer workouts, the Jayhawks were split into two groups to make sure they were never all in the gym at once.

“Just in case something would’ve gone wrong with COVID,” Bechard explained, “so we wouldn’t have the whole group have to quarantine.”

KU volleyball continued with that approach once practices began Friday. The “crimson” group practiced for 90 minutes, left, and soon after the “blue” group entered for its 90 minutes of work.

When Bechard wanted to address the entire team afterward, each group sat at the opposite side of the gym from the other.

During practices, KU volleyball coaches wear masks and protective eyewear and players train in masks. Volleyballs are disinfected between the crimson and blue sessions.

Out at Rock Chalk Park, where KU soccer trains, the players don’t all share the same locker room anymore because there wasn’t enough space for everyone. The film room where the Jayhawks used to review practice footage is a no-go, too. So they watch video while spaced out up in the press box area of the facility. Players no longer eat together around a table, instead grabbing a prepared meal to go. 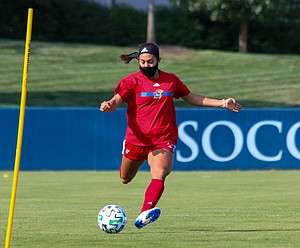 Kansas soccer defender Chais Wright wears a mask while going through a preseason practice on Aug. 5, 2020.

“It’s a pain in their necks,” Francis admitted of the new reality for the players.

But Francis said because his team practices outdoors there are some situations, such as scrimmages, when players aren’t required to wear masks (as of now soccer teams are expected to play mask-free during the season). But in other practice scenarios with prolonged proximity the masks are worn.

Bechard and Francis said the Big 12 has mandated that seasons can not begin until Sept. 1 at the earliest. KU volleyball originally was set to open the 2020 season on Aug. 28. Bechard was on phone calls throughout Thursday trying to formulate a schedule because KU had a Mountain West opponent back out, because the MWC decided its teams will only play in conference.

“I think when all that smoke finally clears it will be a regional schedule for the most part,” Bechard said.

The soccer team, too, will train a bit longer than usual during the preseason, and Francis said the Jayhawks hope to begin playing Sept. 3 versus a yet to be announced foe. 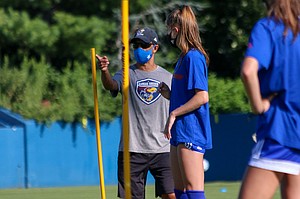 In the meantime, players don’t even know for sure whether the NCAA will hold its fall championships this year — a decision must be made by Aug. 21, per the board of governors.

“That’s crazy to me,” Francis said of the uncertainty of a postseason. “But what do I know. I’m just a coach.”

Asked about his confidence level in there being a full season and NCAA Tournament this fall, Bechard described himself as optimistic.

Bechard figured a significant factor in seeing the season all the way through is what happens when students return to campuses. He thinks most teams could be healthy, but wondered whether teams would be willing to take their players to campuses where problems have popped up.