Chancellor: KU has not received rules violation allegations from NCAA 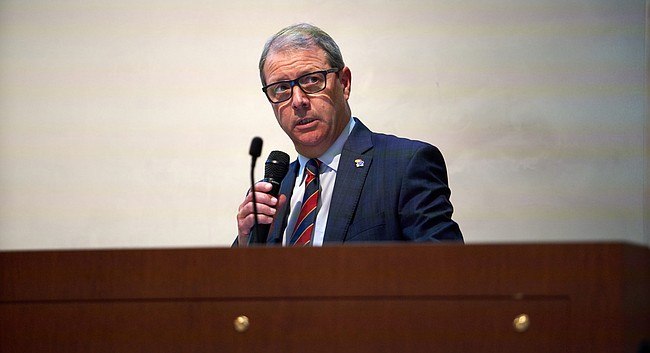 University of Kansas Chancellor Douglas Girod speaks during a KU forum about budget cuts at Eaton Hall in this Monday, Aug. 27, 2018, file photo.

The University of Kansas Athletics program is prepared to receive allegations of rules violations from the NCAA, but so far the university has not received anything from the organization, KU Chancellor Douglas Girod said Friday.

However, Girod said he wouldn’t be surprised if a notice came soon.

“It wouldn’t surprise me if it’s anytime,” Girod said. “But I don’t have direct knowledge of that.”

Girod briefly spoke to the Journal-World at the KU Athletics offices on campus Friday afternoon. When asked about a Kansas City Star report that says the NCAA is preparing to send allegations to the university, Girod said “they may know something we don’t.”

Acknowledging the NCAA has been investigating the KU basketball program for rules violations, Girod said the university expected to receive something from the organization.

“Usually they subsequently come forward,” Girod said of the NCAA’s investigation process. “So we’re anticipating that at some point, but to my knowledge we have not gotten anything.”

In an email to the Journal-World Friday afternoon, KU athletics spokesman Dan Beckler confirmed the program has not received an NOA from the NCAA.

It has been confirmed for months that KU is under investigation by the NCAA for any role the school may have played in a recruiting scandal that resulted in federal fraud convictions earlier this year. Three of the men convicted in the recruiting scandal had ties to KU through their relationship with Adidas, the athletic apparel company that has a multimillion dollar sponsorship agreement with KU.

During a federal trial in one of the fraud cases, former Adidas representative T.J. Gassnola admitted to paying $90,000 to the family of former KU basketball team member Billy Preston in order to get Preston to attend KU. Gassnola also admitted to paying the guardian of KU basketball player Silvio De Sousa $2,500 — and had agreed to pay more — to get De Sousa to attend KU.

During the trial, text messages and other information presented to the court raised questions about whether KU head coach Bill Self and assistant coach Kurtis Townsend knew that Adidas officials were taking actions to steer recruits to KU in violation of NCAA rules.

Great, first Isaac McBride leaves the team, and now we're looking at possibly getting an NOA. Not a good day for us Kansas basketball fans. :(

Congrats Bryce!!! You just made the single most idiotic post in the history of KU Sports - Dot Com! Go Hawkeyes!

This would be a good opportunity to reboot this entire program - clean house and start building something to be proud of - not something that we have to rationalize for the next two years as we contest the corruption of the program.

I’d be happy to go 0-and whatever to get this program built into something that represents good intentions, good mentorship, solid principles and excellence. The less time we waste defending this sh*t show, the sooner we can get on with it.

Bill needs to step up, cash in, resign. He’s a hell of a basketball coach but not much of a man. He’s in the HOF, he’s made millions - the NBA is calling and we need a clean program. Everybody wins.

But.....with Major Milktoast in charge.....get ready to spend the next 24 months dealing with this self-inflicted bullsh*t - as if the worst football program for the past decade wasn’t enough.

Meh. We are an emerging football powerhouse now.

I’m curious at to what the NOA will contain. If it mentions Preston and DeSousa, there should be no penalties with that, as Preston didn’t play and DeSousa served his time. So penalties would have to fall under other violations. If there are some, what are they? How severe? I personally can’t wait for the Nike trials to begin.....however, they have had several years to clean up their stuff. Perhaps they can delete E-mails, smash phones, use bleach bit, remove SIM cards, oh wait, never mind. That was Hillary😂😂😂😂

Well, we all know the FBI is not not a political organization to be used for nefarious purposes.

Federal Bureau of NO Integrity.

Do you have any idea how childish and petty you sound? The same organization that puts their lives on the line to combat international and domestic terrorism and the most violent criminals and you throw them under the bus because your basketball team got slapped on the wrist. Beyond pathetic.

It was reported two months ago that Auburn expected to receive a NOA. As far as I can tell they have yet to receive one.

The NCAA is a criminal organization, which has bound to be in violation of the Sherman Antitrust Acts. They have denied individual liberties guaranteed by the Constitution of the United States. Now they are trying to continue their criminal ways to selectively persecute good people. Kansas should fight this and file a counter suit agains the NCAA for entrapmen over their misleading tactics to declare T.J. Gassnola a Kansas booster.

I’m not convinced Kansas is in for a world of hurt.

My guess - McBride decided to leave the program because either his dad wanted him away from spotlight or KU will lose a scholarship as part of the “sanctions” and McBride was the odd-guard out.

Either way, the NCAA is a laughing stock and is fighting for its life right now as states eliminate amateurism, which would destroy NCAA control of college sports.

I hope we stand up for our players, our staff, and our legacy rather than cower to the evil empire like the Brett McCabes of the world would like to see us do.

Agree on Preston and Silvio but what about Josh Jackson?

Ayton and Zion did not choose KU but it still shows intent on our part. I think that's what they're going to nail us on.

If the NCAA wants to make a fuss over Zion then they will have to investigate Duke since that's where he ended up..not to mention there is no concrete proof that KU offered them anything

Yes they in fact do...can't punish anyone just based on assumption..especially if they want to avoid another lawsuit

Does not surprise me....and could be related to McBride leaving, who knows.

But, more proof that there should be a standardized college contract and players should just be paid. If playing NCAABB isn't a job then you're just lying. At the same I would make the contract a 2 year contract. One and done should be "Over and Done" with as well. If you can't commit for two years then go Pro, Euro or D league and just try and make it on your own.

If we’re allegedly being sucked in and implicated in this adidas mess, why did KU renew its contract with them? Perplexing!

The state of California may be the downfall of the NCAA, I never thought anything good could come out of California, but this may be it. Other PAC12 States are sure to follow, as they have with other CA legislation. Then how do they keep the PAC12 out of bowl games and the championship series? And then they have the BB tournament, can the NCAA ignore all those PAC12 TV sets. What will keep the NCAA alive if the TV contracts aren't as lucrative? Surely other States in other conferences would follow, they would have to if they wanted to continue to attract top talent. This could get really interesting, and scary for an aggressive looking NCAA.

I love what California is doing. 40 million people plus the possibility of adding Arizona, Colorado, Utah, Oregon and Washington is a number the NCAA can't ignore.

The NCAA has always had it in for Kansas. My theory is they did not like our complete dominance of the B-12 and they want to equalize the competition for the championship each year. The whole Nike Duke matter is a joke.

Man, this thread went full Derp State in a hurry.

The NCAA is NOT some nefarious organization out to get this school or that school! Neither is it protective of certain schools over others. The NCAA is a member organization of 1121 colleges and universities, 99 voting conferences, and 39 affiliated sports organizations.

NCAA Committee on Infractions: In accordance with NCAA Bylaw 19.3.1, the COI membership shall include, where reasonably possible: current or former presidents, chancellors, directors of athletics; former coaches; representatives from conference offices; faculty/staff; athletics administrators with compliance experience; and general public members who have formal legal training but who are not associated with a collegiate institution, conference, or professional or similar sports organization and who do not represent coaches or athletes in any way.

(These are the EVIL people some are speaking of) Please stop.

I strongly disagree. The NCAA IS a CRIMINAL and EVIL organization. They entrap a large group of young people into a system of indentured servitude, which is a form of slavery. They bring people to academic institution to use their athletic abilities solely to generate millions/billions of dollars for those institutions under the false promise of providing an education while denying them their constitutional rights.

Suzi, the University of Kansas, as a member of the NCAA, falls into the category to which you refer. The NCAA offices in Indianapolis administer but do not set, the rules of which you are complaining. The member schools are responsible for making (and) changing the rules. If you have a beef, take it up with Chancellor Girod!

I know all about how the NCAA operates. They know my feelings and they have heard the same from many others. In fact, they have heard the same in court and found to be GUILTY on many occasions and settled out of court on many more cases they were loosing. The NCAA has been found by courts of law to be a criminal organization. What they are doing to Kansas, Louisville, Arizona and other schools is a violation of the rights of those kids. If I had a child involved in this mess, you bet I'd sue the NCAA for all they had....and set up a trust fund to spread the money out to as many abused former players as possible.

I didn't agree with you initially but the cap locks have persuaded me to re-think my position.

The Klan, ISIS, American Nazi Party, etc. are evil and criminal organizations. The NCAA is inept, disorganized and unfair among other things but don’t belong in the same boat with the aforementioned.

...which apparently leads to eye opening inconsistency in regards to punitive action against its players and universities that lie within its purview.

I agree that this organization should have a house cleaning!! Last summer I predicted this would hit the fan the week before the Champions Classic. They're right on pace....

I wouldn't jump that far ahead..if something is gonna happen it won't be this season...the kid probably left because he didn't think he'd get playing time??

1 low rated kid leaving isn't too alarming..now if a few more jump ship then it could be time to panic..though i think his role on the team might not have been what he thought it would be..I'm sure he didn't think Dotson would return return...hope this is the worst of it....hate to say it but I hope KU uses its blue blood card to get out of penalties like UNC did and Duke always does lol