Kansas guard Ochai Agbaji (30) tangles with Fort Hays State guard Aaron Nicholson (1) for a ball in the corner during the first half, Thursday, Oct. 24, 2019 at Allen Fieldhouse.

It was supposed to be the Kansas size that overwhelmed and swallowed up visiting Fort Hays State during Thursday’s exhibition opener at Allen Fieldhouse.

Instead, it was the menacing KU defense that paced the Jayhawks to an 86-56 victory.

Led by a combined six steals from starting guards Ochai Agbaji and Marcus Garrett, Kansas ripped off a 17-4 second-half run to gain separation and then cruised from there.

Late in the first half, with Fort Hays State more than hanging around, Agbaji recorded back-to-back steals that gave Kansas a little space.

The first, which came in front of the KU bench and was the result of ball pressure by Garrett on the FHSU point guard, led to a high-flying, right-handed jam that ignited the crowd.

The second swipe, which came when Agbaji split two Tigers players and needed just two steps — and no dribbles — to reach the rim, ignited Agbaji, who let out a monster roar after the dunk that put Kansas ahead 36-21.

Although the highlights belonged to Agbaji, it was Garrett who the Jayhawks thought deserved the praise.

“I said, ‘Ochai, why’d you get two dunks,’” KU coach Bill Self recalled after the victory. “He said, ‘Because Marcus pressured the ball.’ And then it makes it easier to run through a pass.” 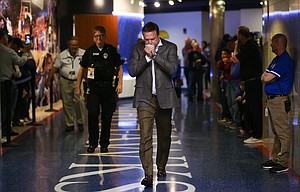 Agbaji backed up that story in the postgame meeting with the media, intercepting a question for Garret the way he did passes on the court to make sure the junior who started at point guard in place of the injured Devon Dotson (right ankle sprain) received the proper credit.

“I would have to say those came from Marucs,” Agbaji quickly interjected when asked about the steals. “I give him a lot of props there. Playing on-ball defense definitely allowed that turnover to happen.”

As for the dunks that followed, those, Garrett said, were all Agbaji.

Answering the question — at least temporarily — of which Jayhawks would prove to be reliable shooters from the outside, Agbaji and Garrett also combined to hit seven of 16 from 3-point range. Garrett made three of his four triples in the first half, proving that open looks and the belief that they’re going in can be dangerous weapons.

And Agbaji, who missed three open looks in the first half, made three of six in the second half.

The two combined for 36 points (21 for Agbaji and 15 for Garrett), eight rebounds and six assists to go along with their six game-changing steals.

“I do think it’s much improved,” Self said of Garrett’s jump shot. “There’s no question. He has worked on it awfully hard and it does look a little different from a technique standpoint than it did last year. If he can be a threat to shoot above 30 (percent) from 3, which I think he can, that’ll change how people have to guard us for sure.”

Trailing 36-25 at the half, Fort Hays State scored the first nine points of the second half to trim KU’s lead to two just two minutes into the half.

Four minutes later, back-to-back steals by Garrett led to consecutive 3-pointers from Agbaji and KU was back in front by double digits.

That sequence, which included a steal and layin by freshman wing Tristan Enaruna, capped KU’s big run that ballooned to 26-7 before the game was firmly back in KU’s hands.

None of Thursday’s outing was as easy as the Jayhawks would have liked. Especially for their big men. 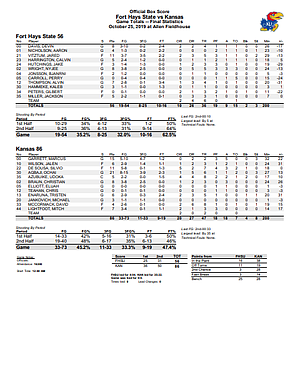 Starting center and Big 12 preseason player of the year Udoka Azubuike struggled to find room and space inside all night against the scrappy FHSU players who swarmed him like bees on a hive.

In 17 minutes, Azubuike finished with five points and eight rebounds. He did not record his first point until late in the second half and shot 1-of-5 from the free throw line.

Even junior Silvio De Sousa, who finished with a much more aesthetically pleasing final line of 11 points, seven rebounds and three assists in 18 minutes, got most of his production off of five offensive rebounds and free runs to the rim.

De Sousa was tied up in the post on the opening possession of each half, as KU tried to play to its size advantage but simply could not.

“Bad start,” Self said when asked about the play of KU’s big men, particularly De Sousa.

Part of that was because of the game plan employed by FHSU coach Mark Johnson.

“We just tried to send everybody there,” Johnson said. “We can’t take away everything, so we tried to take away everything they had at the rim and hope they missed a couple 3s. I would assume that’s going to happen a lot this year. But I was really impressed with the defensive effort they put together. From point guard to center, that was about as long a team as we’ve played.”

I'll chalk up the rocky start to first-game jitters and players not being on the floor for so long (Udoka and Silvio). No matter. We won by 30, and it's great to have Jayhawk basketball back!

Matt, good analysis of last night's exhibition game. And, although early games are typically a bit sloppy, they are a great way to see the new players and measure the improvements from some of the older players.

Actually, the purpose of my post is to request that you include ESPN+ showings in the "Next games" box along with major network broadcasts. I ardently support the Jayhawks from my home in South Carolina. I am not able to watch KU sports activities on my local media networks so would appreciate announcements on kusports.com, my only KU sports news outlet.

ESPN+ is now Prime Time. It is an app available on phones and media devices, including today's TVs. I am, therefore, able to watch KU football and basketball games, "Hawk Talk," KU pressers, ESPN's "Miles to Go" series and many other sports events not available on regular media. It is important that you reflect this in your "Next games" box.

Thanks for the note and the suggestion... I'll see if we can make that happen. If for some reason we can't, please note that it IS reflected on our schedule page, complete with a link that makes it easy to sign up for ESPN+ for those who aren't already subscribing to the streaming service.

Thanks Matt. I depend on "The Box."

It appears ESPN+ is becoming the defacto Big XII network. If UT had been more neighborly (I work for UT, I know how authoritarian they are) we might have a free network to watch our Jayhawks. Just like all the other Power 5 conferences except ACC.

Another thing that I've noticed is that if you try to start watching the ESPN+ broadcast an hour into it (like I do when I record games off the TV) to avoid the commercials, there doesn't seem to be a way to start it at the beginning; the only option is to watch it "live," and it also shows the current score. So I have to wait until after the game has ended and then watch it. Is there any way to avoid that?

ESPN+ isn't a substitute for TV DVRs, but for many games it's the only solution. And, since I'm out of state it's a godsend. In the bonus category "Hawk Talk," KU pressors and "Miles to Go" are great. For $50 annual subscription it was an easy choice for me... And, I watch it on my big screen TV like any other game. Streaming is changing the world.

To answer your questions, I doubt if there is a way to skip commercials. We are spoiled, aren't we?

Len, There was a scroll thing at the bottom and it seems like I was able to back up 10 minutes or so and then restart it and play from that point.