KU argues with NCAA that Adidas isn’t a booster, but sends out flyer to local businesses suggesting otherwise 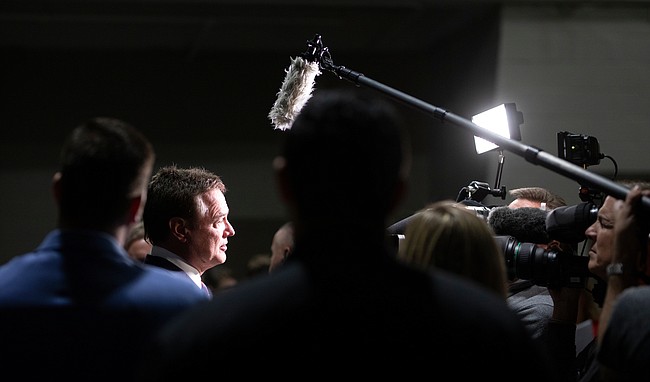 Whether former Adidas consultants — and now convicted felons — were boosters of KU Athletics is a big question in the NCAA’s case against the university.

The NCAA argues Adidas officials were boosters, making their many contacts with KU coaches about recruits impermissible. KU leaders, though, have said they’ll forcefully argue otherwise when they present their case to the NCAA.

But KU leaders this week sent out a flyer to thousands of local businesses that may create some confusion about that argument. The Kansas Athletics Compliance Office this week sent an electronic copy of its “Guide for Jayhawk Supporters” to many businesses in the Lawrence area.

The guide aims to help businesses understand how to interact with student-athletes in a way that complies with NCAA regulations. The guide provides a definition of a booster. It states:

“A booster is an individual, independent agency, corporate entity (e.g. apparel or equipment manufacturer) or other organization that is known to:

• Hold, or have ever held, season tickets for any sport with Kansas Athletics;

• Have participated in or to be a member of an agency or organization promoting any Kansas Athletics program (e.g. University of Kansas Alumni Association, K Club, sport booster groups, etc.);

• Have made financial contributions to the athletics department or to an athletics booster organization of that institution (e.g. Hardwood Club, booster groups, etc.);

• Be assisting or to have assisted in providing benefits to enrolled student-athletes or their families, which would trigger booster status under NCAA rules. These benefits include, but are not limited to, financial assistance, use of a car, use of a cell phone, etc.;

• Promote Kansas Athletics in any way.”

KU chose to specifically highlight apparel companies as an example of a corporate entity that qualifies as a booster. Adidas is an apparel company. Through a multimillion dollar contract with KU Athletics, it also seemingly meets the other requirements in the definition. The company, for instance, receives season tickets to various KU sports, and frequently promotes Kansas Athletics.

However, in its Sept. 23 press release announcing the NCAA’s case against the university, KU leaders specifically said they do not believe Adidas or its employees are boosters. “First and foremost, the university emphasizes that it emphatically rejects the assertion that Adidas and Adidas employees and associates were boosters and agents of the university (as defined by NCAA legislation) during the period of the alleged violations . . .” KU said in its release.

It wasn’t clear Wednesday why KU chose to send out a compliance guide listing apparel companies as a prime example of boosters, or what distinctions KU officials were making about Adidas in this particular case. KU previously has said it is not yet commenting on the specifics of its response to the NCAA, which is still being crafted.

Welp, that wasn't well thought out was it. Smh

This seems like they are just trying to cover their own @$$ in light of the Adidas issue..even a player being given a free meal at a Lawrence restaurant will trigger a violation..I think they just want to prevent that

Welp, using that definition employees of the LJW, Capitol Federal and Koch Industries are boosters, too. Have some fun.

Are you dumb Chad or does your blind hate for KU just run so deep that it makes you incapable of rational thought?

A simple Google search of "A booster is an individual, independent agency, corporate entity (e.g. apparel or equipment manufacturer) or other organization that is known to:" indicates that EVERY school uses the same exact language for their "booster" guidelines. It's not a KU thing, it's how it's defined by the NCAA you numbnut. They weren't going out of their way to define it a certain way, they were defining it EXACTLY AS THE NCAA does.

Here is a link in case you can't figure out how to use Google: https://www.google.com/search?q=A+booster+is+an+individual%2C+independent+agency%2C+corporate+entity+(e.g.+apparel+or+equipment+manufacturer)+or+other+organization+that+is+known+to%3A&rlz=1C1CHBF_enUS799US799&oq=A+booster+is+an+individual%2C+independent+agency%2C+corporate+entity+(e.g.+apparel+or+equipment+manufacturer)+or+other+organization+that+is+known+to%3A&aqs=chrome..69i57j69i64l3&sourceid=chrome&ie=UTF-8

Here’s the actual link and the likely reason we are under investigation. Whether Adidas is a booster or not seems irrelevant.

"Only institutional staff members are permitted to recruit prospective student-athletes. Generally, NCAA rules prohibit anyone else from contacting (calling, writing or in-person contact) prospects or the prospect’s relatives or guardian for recruiting purposes."

So just contacting a recruit without offering any financial inducements is forbidden.

So sending out the EXACT same info as every other school in the NCAA regarding booster rules is incompetent?

So what would be competent in your mind, not sending out a reminder of what the rules are? Sending out rules not in line with the NCAA's guidelines?

I don't know but would sure bet that the NCAA requires this information be sent out by the schools on some periodic basis. So why on earth is this an article on kusports? And why the headline that seems to say, "here is ammunition, go get 'em?"

Well there goes KU's defense, they knew along that Addidas was a booster. How can they be so dumb?

Considering you took the bait in this article rather than using rational thought (or reading the first handful of comments), I'm not sure you should be calling KU dumb.

Please explain how I am the dumb one? Am I missing something?

Yes, you're missing the fact that this entire article is based on the assumption that KU somehow "messed up" by sending out the exact same message that every other university sends out in accordance with NCAA guidelines using the exact wording the NCAA uses.

In other words, the author of this article and anyone who believes he's on to something with this article is a few sandwiches short of a picnic.

They are just playing with NCAA...

So is every "sponsor" a booster? I think not. Every corporate sponsor gets certain benefits in exchange for their investment. In addition to logos, ads, and other marketing, it can also include a number of tickets, promoting the program, and providing certain benefits (clothing, etc). In other words, whether it's Adidas or Phillip 66 or whoever, every official corporate sponsor will get benefits that would make them a "booster" if it was done under the table. That's where this argument goes off the rails: KU (and every other school) openly offers and sells corporate sponsorships in a totally above board and reasonably transparent way. The benefits aren't secrets and are openly negotiated and enumerated in the agreement between the sponsor and the universoty.

Exactly. A sponsor is legally contracted for such activities and is transparent. A booster has no contract is in essence making illegal bribes to players. IMO, KU's argument is that it was not Adidas but a few Adidas employees that were acting independently without Adidas or KU knowledge. Not to mention, the players involved either did not attend KU, or were held out playing, or in Silvio's case sat out until reinstated.

I will leave it up to the lawyers. One of the interesting definitions is this: “Be assisting or to have assisted in providing benefits to enrolled student-athletes or their families, which would trigger booster status under NCAA rules. These benefits include, but are not limited to, financial assistance, use of a car, use of a cell phone, etc.;”. It says enrolled student-athletes. Pretty sure The recruits involved in this scandal weren’t enrolled at the time of said benefits....except for Preston. So...did Adidas continue to make benefits to these people AFTER they enrolled?

Based on this story, I find it interesting that each and EVERY NCAA University is not guilty of violations of the aforementioned rules. It's a freaking shell game, and the NCAA turns a blind eye towards such participating institutions in the ACC (like Duke, UNC).

I think people are making more of this than what it really is...IMO, KU is doing this to prevent any future situations..this is no different than my apartment complex sending out flyers to remind residents not to block aisle..even though its in the lease, they still need to remind people from time to time..even a taco bell manager giving players a free lunch can be labeled a violation ...

Mr. Lawhorn, what you've just said is one of the most insanely idiotic things I have ever heard. At no point in your rambling, incoherent response were you even close to anything that could be considered a rational thought. Everyone in this room is now dumber for having listened to it.

This reads as an antagonistic “hit piece” provided by Kansas’ own sports page. It even appears that Mr. Lawhorn didn’t even ask KU to officially comment on the new development, and instead simply says “KU previously said...” Mr. Lawhorn must have done an internship at CNN.

As for the meat of the article:

Were Gatto and Dawkins working for Addidas, or moonlighting for an unofficial FBI start up “talent agency”? Has KUsports reported on the actual FBI investigation? They should. It may become relevant in the future.

1) If Addidas is a “sponsor”, per NCAA regulations, then every Addidas school is liable, along with all Nike, Under Armor, et al programs.

3) Preston never played. Silvio only played after being deemed eligible...twice.

Seems point needs to be stressed IF ADDIDAS IS BOOSTER.. THEN NIKE UNDER ARMOUR ***ALL SPORTSWARE OR SPORTS SUPLLIERS ARE. And if they all are then EVERY NCAA SCHOOL HAS BOOSTERS STEERING RECRUITS

KU. Needs to take this issue head on. Does the rule apply to all ? If so then infractions should apply to ALL be zero schools left. NCAA needs to apply rules across the board.

Do not be fooled even small schools have bigger infractions . Gifts to athletes. No names but my business was asked to have players work for my company years back and never show . Friends cousin was flat paid to go to other university in state .... yes you can guess.

Be very careful ncaa to bite hand that feeds you

It is all about the NCAA's definition of booster. Like others have said based on their definition every school that has an apparel contract is in violation of these rules. You think Nike didn't talk to Zion Williams for Duke when they were paying his mother to manage the AAU team that he was playing on for the last two years of his high school career? If you believe that then I have some soon to be beach front property that I would like to sell you. The NCAA is mad because KU or people who work for KU took the De Sousa story to the public. You had sports reporters saying that the NCAA had been unfair to De Sousa and that pissed off the NCAA. It is a huge mess which was created by the NCAA. You have coaches making millions of dollars a year and where do you think that money comes from? The Addidas contract helps to cover some of Bill's $4.9 Million dollar contract. Duke has a lot of money but I am sure that Nike's contract helps offset the just under $8.9 Million dollar contract. The schools have to come up with the money from somewhere?