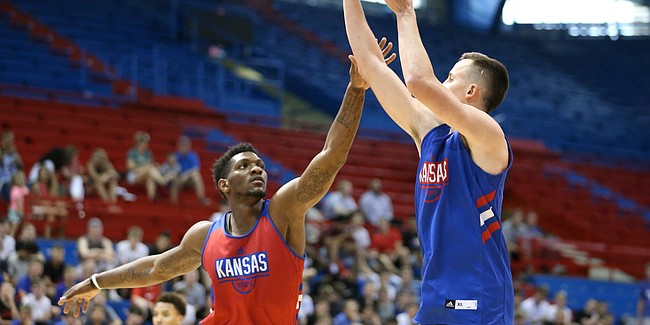 Kansas forward Silvio De Sousa defends against a three from Kansas forward Mitch Lightfoot during a scrimmage on Tuesday, June 11, 2019 at Allen Fieldhouse.

Believe it or not, Kansas basketball coach Bill Self is already talking about playing zone defense.

It’s not exactly what you think. Self and his team still want, and plan, to hang their hat on man-to-man defense. But because of the makeup of this year’s roster, there already has been more talk about possibly playing zone than at this point in the season during any of Self’s previous 16 years at Kansas.

“It’s a bad zone,” Self said during the Jayhawks’ recent media day. “But we’ve actually put in a zone earlier this year than we have probably at any point in time.”

The reason is simple and has everything to do with personnel.

While injuries, player development and specific game matchups all factor into the answer, Self said this week that he expected to use Udoka Azubuike, Silvio De Sousa and David McCormack, “and possibly Mitch (Lightfoot)” as the anchors for KU’s big lineups roughly 60-70% of the time during the upcoming season.

“Thirty or 40% of the time we’ll probably make adjustments and do something different,” Self said.

The reason Self used the word “possibly” with Lightfoot, a senior forward who has played just 13 fewer career games than the other three combined, is the fact that Lightfoot could consider redshirting this season instead of playing limited minutes in a crowded front court.

“It’s still up in the air with Mitch on what we’re going to do this year with him,” explained Self, noting that his propensity for playing bigger lineups earlier in his KU career was as much about the style of game and construction of his roster as anything.

While Azubuike, De Sousa and McCormack without question are three of KU’s best players, the big key for how often they might be able to play together is how quickly De Sousa can demonstrate his ability to play consistent perimeter defense.

“That’ll be a big question on how much we can do it,” Self said. “If you’re playing a team that basically plays four guards and the fourth guard is 6-8 but can really shoot, that’s a different assignment than he’s ever had. … He’s doing fine. He’s just not used to guarding out there.”

Get over yourself, Bill. Your man-to-man hasn't exactly been the most effective defense in recent years. Besides, you got to the 2012 Final Four on the strength of zone defense, so it can't be all bad.

Bryce, it is amazing how you know more than a hall of fame coach.

Bryce, I’m not sure why you would make a comment saying for Coach Self to get over himself! That’s a pretty arrogant thing to say about someone who is simply talking about their options. Sometimes people are too Negative! Now, I have always wanted to play more Zone in certain situations. We have the length and athleticism to play a heck of a 1-2-1-1 full court zone press, and we could devastate people with a 1-3-1 half court trap!

Joe and Bill - I would offer the Easy summary of, “Get over yourself Bryce” though each of you make perfectly accurate observations as well.