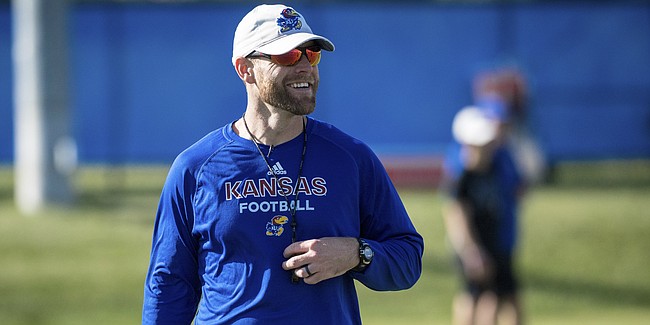 how many times has this sentence "..the Jayhawks can only go up from here.." been written about kufb in the last decade; seriously? i like this guy, hope he works out. but if he was so great, why did Les is More chose Les is Less Koenning to lead the offense to start? I-formations w a 170lb scat back? jfc. win 1 more game & ull make hclm out to be a 'genius'. hopeful, but realistic. #RCJH

We were way too predictable on offense. He will go through some growing pains for sure. He also needs to get the players in that he needs to run the offense. I think he will be a very good one. I have not been overly optimistic and have been a realist before the season began(rightfully so, look at our record). But I think we are all going to be pleased with this guy

First shot at running a P5 offense. Would be difficult to find a more challenging P5 job than KU. Hope he knocks it out of the park but will be satisfied if he can improve the offense in his first game against UT and before season's end have them playing up to their potential.

Guessing Brent was supposed to be the understudy for a couple years before Lindsey’s premature departure. LK was safe but again guessing that Miles was checking an evaluating the possibility of a change with each stagnant performance.

I am fine with this change. The Kansas offense has not been good enough to consistently win games for ten years. If this young lion has the gift we’ll lets give him a chance

What must be realized is he is guiding an offense that has much less physical talent than the Texas and many other defenses in the Big 12. Even with that what I am looking to see is if he can teach Carter how to make a higher percentage of sound decisions on whether to hand off or throw. This RPO will be as successful as the Online and the QB are at doing their jobs. The OLine has not impressed me this year, yet we have still shown moments of clicking. I am hopeful Dearmon can bring a unity to that crew and quick and sound decision making to Carter.

Carter isn't the answer. Never has been, never will be.I'd rather play a younger guy to get him experience for the future instead of a known poor performer.

A question that I did not hear asked at Coach Dearmon's news conference is whether KU has the talent at receiver, quarterback, running back and offensive line to compete in the upper echelons of the Big 12. My perception is that KU was not under-performing relative to its talent, and that Dearmon, to be successful, will have to find a way to get the offense to over-perform.
It's probably too late in the season to expect this team to make incremental improvements that will significantly improve its overall offensive performance. He's going to out-scheme the opposing defenses. I hope he is that good.

JUST maybe, the QB Beaty's staff recruited (and Grey-shirted) might be that QB? And, he's getting a whole year to get acclimated to the current offensive style and coaches.

"Quarterback Sam Castronova set the single-season school record with 28 touchdowns passes and 2,453 passing yards — records that were previously held by Dearmon himself."

"It would have been easy for Dearmon to stay put at his alma mater. ... He remains the school’s career and single-season record-holder in passing yards (7,045) and touchdowns (77) ..."