Facing a Heisman trophy contender and a top-10 team is no small feat, meaning Kansas had its hands full before the game even kicked off.

When the game did finally kick off after a brief weather delay, KU didn’t quite match up in a 45-20 loss to No. 6 Oklahoma.

Initially, it looked as though the Jayhawks may have a fighting chance, taking a 7-0 lead in the first quarter with a touchdown pass from senior quarterback Carter Stanley to senior wide receiver Daylon Charlot.

However, after a failed fourth down conversion from KU, Oklahoma took control of the game by scoring 42 points from the end of the first quarter on.

Stanley finished 18-of-28 for 230 yards and three touchdowns, and sophomore running back Pooka Williams helped pace the offense with 137 yards on 23 carries. Junior wide receiver Stephon Robinson led all KU receivers with five catches for 131 yards and two touchdowns.

For the Sooners, quarterback Jalen Hurts finished 16-of-24 for 228 yards, two touchdowns and an interception. Hurts also rushed 10 times for 56 yards and two touchdowns. 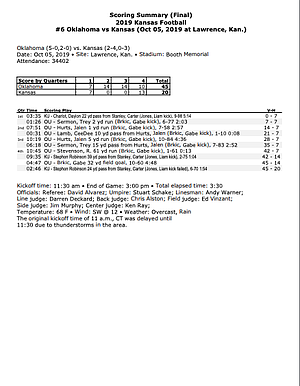 Oklahoma proved to be the better opponent once again, overcoming a slow start and taking advantage of KU’s mistakes throughout the game. The Jayhawks are still searching for their first Big 12 win, now sitting at 0-3 in conference play.

KU, tied with Oklahoma 7-7, failed to convert a 4th-and-2 on the Sooners’ 41-yard line, turning the ball over on downs.

The Jayhawks had made up ground on third down with a 7-yard rush to the right by Williams and looked to go for it without hesitation.

Stanley rolled to his left and saw senior tight end James Sosinski had found a bit of an opening, albeit draped by two defenders. Regardless, Stanley fired a pass to Sosinski that hit the tight end in the hands, but was dropped.

This gave the ball back to the Sooners, who took a 14-7 lead on the next drive and never trailed for the rest of the game.

After a 58-yard Oklahoma punt and back-to-back false start penalties, the Jayhawks were backed up against their own endzone. And while this certainly wasn’t enviable field position, KU managed to make the most of this offensive drive.

The drive kicked off with a 24-yard rush by Williams, followed by Stanley finding junior wide receiver Stephon Robinson for gains of 12 and 19 yards.

Finally, Stanley connected with Charlot in the endzone for a 22-yard touchdown, capping off a nine-play, 98-yard drive that gave KU a 7-0 lead over Oklahoma in the first quarter.

Oklahoma looked to extend its lead midway through the second quarter, as the Sooners were set up with another 1st-and-goal opportunity. However, holding penalties and a sack by KU senior linebacker Azur Kamara slowed down the Sooners.

But the real surprise came on 2nd-and-goal from the KU 25-yard line, when Oklahoma tried its second double reverse of the drive. Sooner wide receiver CeeDee Lamb was pitched the ball, but was quickly stifled by a swarm of KU defenders.

Lamb officially rushed for a loss of 20 yards, but instead of going down, flipped the ball to Hurts who was immediately sacked by redshirt sophomore safety Davon Ferguson. After the smoke cleared, the Sooners were faced with a 3rd-and-goal from the 48-yard line.

• Up next: Kansas will have a bye next week before going on the road to face Texas at 6 p.m. on Saturday, Oct. 19.

Let's face it this team is never gonna win another game unless they start making better decisions. The sequence before half, no punt returner, the ball rolls to the 2, we run 3 running plays, punt the ball, give up a big return with a face mask they score, that just killed any momentum we had going into halftime. OK then gets the ball after halftime and scores. Just a killer. D gassed by then. Now KU might have lost the game by the same score but this is Oklahoma not South Dakota State you can't give a team like that any chance if you want to have a chance in the game and at that point KU was in it. Sometimes Les is less. Sequence was confusing to say the least. Yes Lee dropped sure pick 6 would've been a huge momentum swing as well.

I wonder if we will hear from Super DB Bryce Lamedon after his precious Hawkeyes lost to Michigan today. Michigan who lost big to Wisconsin. Iowa couldn't beat them.

Pretty much what everyone expected. Even in a good year we’re usually looking at a loss when we play OU.

On the bright side Iowa lost a heartbreaker. Has to be painful for Hawkeye fans. Boo hoo.

Iowa is a middle of the road team - will never compete for a NC in football.

I think the headline is a little unfair this time. A few missed opportunities, but KU played hard for 60 minutes against a team that has embarrassed everyone they have played all year, and we played them closer than Texas Tech did. No moral victories, of course, but on balance over 6 games, there is visible tangible improvement from last year, I'd say the most we have seen in 10 years. Coastal Carolina was the worst game of the year, and play-calling really hurt us against TCU. KU has played well enough to win the other games so far. Lets see if the toughness continues in a couple weeks.

Mike Lee needs to understand that he is catching footballs, not spare tires. The TCU whiff and today’s were brutal. Followed by a makeup late hit. Mike....you have hands.

Coaching decisions at the end of the first half were mind boggling.

We beat the spread on a weather delayed game. So I’ll take it.

And, Baylor won so the day wasn't a total loss.

Does anyone on defense for KU know how to,wrap and tackle all they want to do is dive at the runners legs and on two of their long RD runs we just bounced off them. Basics are lacking

The D highlight to me was the INT by DE Stevens-McKenzie. What an amazing play by the big guy. Tight coverage and then just snatches the ball out of his hands.

Pinball tackling nots so much.

That was an exceptional play. The offensive highlight could have been the 4th and 1 disguised to look like a QB sneak if Carter doesn't overthrow his receiver. I loved the call even if it didn't work.