Behind freshman guard Zakiyah Franklin’s career-high 19 points, Kansas came back to defeat Wright State, 74-63, in the opening game of the FAU Thanksgiving Tournament in FAU Arena on Friday.

Franklin led the way in the scoring column, but sophomore guard Aniya Thomas (15) and freshman guard Holly Kersgieter (14) were not too far behind. Junior forward Tina Stephens and junior center Bailey Helgren paced the team in rebounds with nine and eight, respectively.

Wright State jumped out to an 18-12 lead after the opening quarter and led by as many as 10 in the second period. Franklin then drilled a 3-pointer to spark an 8-2 run in the last 1:34 to make it 32-28 going into halftime. 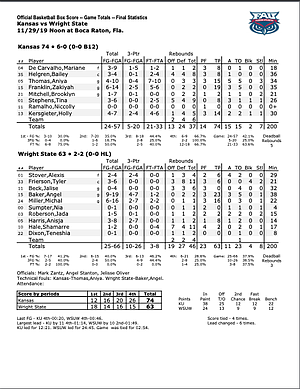 Wright State maintained a 4-point lead for the first three-plus minutes of the third quarter, but Franklin went on a quick 6-0 run to give Kansas its first lead since tip at 39-37 with 4:25 left in the quarter. Thomas missed a free throw, but Stephens grabbed the offensive rebound and put it back in to tie the game at 48 entering the fourth quarter.

Kersgieter got the final period started for the Jayhawks with a quick 3-pointer to start an 11-2 run, making it 59-50 with 6:28 remaining. The Jayhawks cruised to a double-digit win after that.