To college hoops coaches, ‘There’s nothing like the Maui Invitational’ 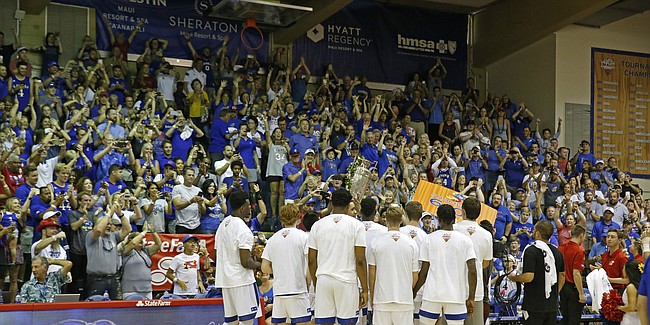 While holding the winning trophy, Kansas celebrates with their fans after defeating Dayton 90-84 in overtime in an NCAA college basketball game Wednesday, Nov. 27, 2019, in Lahaina, Hawaii. (AP Photo/Marco Garcia)

Every year for the past three-plus decades, the eight coaches competing at the Maui Invitational have expressed their gratitude over the opportunity to take a team to Maui.

And this year certainly was no different.

But for Chaminade coach Eric Bovaird, who last year for the first time in his nine years at the school had to sit and watch the event instead of coaching in it, the return to the sideline at Lahaina Civic Center was even more special.

After serving as the host school since the creation of the Maui Invitational in 1984, Chaminade was left out of last year’s field because of a new wrinkle designed to enhance the event and create new opportunities for Chaminade.

Instead of playing in Maui every year, the Silverswords will play two games in the mainland bracket in even-numbered years and will be in the Maui Invitational field during odd-numbered years.

Whether the team with eight wins in the event in 103 tries is in the field or not, the coaches at this year’s Maui Invitational continued to sing the tournament’s praises all week.

“It’s a tremendous honor any time you can bring your team and represent your university, but it's a little more special when you're in a place like Maui,” said Georgia coach Tom Crean.

Added UCLA coach Mick Cronin: “Everybody watches Maui and everybody’s tried to replicate this, but there’s nothing like the Maui Invitational. So when you’re a young kid, you coach, whatever, you’re always sitting there, this is the tournament that you want to be in. So I’m looking forward to four years from now.”

So is Bovaird, whose team will be back on the mainland next year but will be playing close to home again in 2021 and 2023.

“This event is so special to us,” Bovaird said. “It’s something we talk about, we plan for a long period of time. It’s what we’re known for worldwide, especially in the basketball world. So it’s an incredible event, and I don’t take it for granted.”

KU’s Udoka Azubuike and Devon Dotson may have walked away with the MVP trophy, but the two players most talked about in terms of their NBA futures this week were Dayton’s Obi Toppin and Georgia’s Anthony Edwards.

Edwards, who KU recruited, showed off his talent in some very specific moments. He scored 33 points in the second half of a Day 2 loss to Michigan State. And he was an absolute monster in the final minute against Chaminade in the seventh-place game, delivering a LeBron James-esque chase-down block on one end and hitting the game-winning 3-pointer on the other.

ESPN.com draft analyst Mike Schmitz repeatedly said that Edwards is in the running for the No. 1 pick in next June’s draft.

“He’s got a real energy about him with the way that he plays and he’s learning a lot,” Georgia coach Tom Crean said. “The good news about him is while he's learning, most importantly he knows he has to learn, and I think that's what, that's where the humility comes in. Because he’s very talented, very athletic, but really, really wants to be great and he’s learning a lot about that.”

Toppin, who joined Edwards, Dotson and Azubuike on the all-tournament team, was not quite as heralded as Edwards entering Maui but showed that his talent was every bit as big.

Unranked by Rivals.com in the 2017 class, Toppin is regarded as a lottery pick, whenever he enters the draft, and ESPN analyst Jay Bilas said this week that Toppin had been “the best player in Maui and it isn’t close.”

Dotson and Azubuike averaged 21 and 18 points, respectively, during the Jayhawks’ three games in Maui.

One of the more interesting things in the piles of game notes that showed up in Maui this week was the way the Georgia Bulldogs wrote out their roster.

Instead of listing players as guards, forwards and centers, each Bulldog was listed with a B by his name in place of a specific position.

The B stands for basketball player and is yet another indication of the game’s evolution toward interchangeable parts playing multiple positions all over the floor.

Although the Jayhawks won’t be eligible to return to Maui until 2023, the Big 12 Conference again will be represented in next year’s field.

Texas will be joined by Alabama, North Carolina, Davidson, Providence, Indiana, Stanford and UNLV in Maui next season.

Host school Chaminade will be back in the field in 2021.

==The B stands for basketball player and is yet another indication of the game’s evolution toward interchangeable parts playing multiple positions all over the floor.== Yep, been saying this, if we don't adapt we'll be left behind, coach. No prime recruits will regard our program.

Coach Steve Zimmerman lets HOF coach Bill Self know what he should be doing. Sure hcbs appreciates your insight.

The B stands for bullocks.

Or Bugger off? LOL

B stands for "(you) Better sign a point guard next year"