But then things went horribly wrong.

Lauded for years for his defensive prowess and ability to guard multiple positions, Garrett picked up two early fouls and twice was sent to the bench for long stretches of time during the Jayhawks’ 90-84 overtime victory at Lahaina Civic Center. 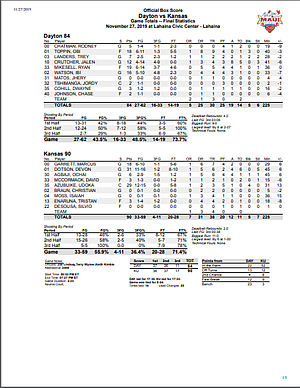 It was clear in the early going that Dayton (5-1) wanted no part of Garrett guarding its best player. The Flyers continually put Garrett and Kansas sophomore Ochai Agbaji in ball screens, trying to force the two Jayhawks to switch defensive assignments.

It worked most of the time, but Agbaji never allowed it to become a problem.

“Going into the game, that was our plan: that Marcus was going to guard Obi,” Agbaji said after the victory. “But when we needed to adjust and things happened like that, we just followed through, I trusted my teammates, stayed aggressive and tried my best to handle him.”

Toppin finished with 18 points and nine rebounds, showing his immense talent at various points during Wednesday’s high-energy title game. But he did not attempt his first shot until the 5:46 mark of the first half, and Agbaji did enough while Garrett sat to keep Toppin from killing Kansas. 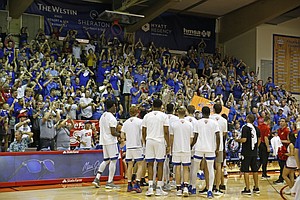 Five minutes later, with the Jayhawks and Flyers still fighting for control, Garrett was back on the floor, the rare time that Self has allowed a key player with two fouls to return to the action during the first half.

“After he was back in there, we were obviously a much better team,” Self explained.

With just under two minutes to play in the first half, and Garrett still holding strong with just two fouls, Self subbed freshman Christian Braun into the game and let Garrett ride out the final 98 seconds of the half on the bench without having to worry about getting his third foul.

It looked, at the time, as if the Jayhawks (6-1) had dodged the bullet.

But then the second half started and Garrett quickly found himself in an even dicier situation.

A foul at the 18:55 mark on the second half’s opening possession gave Garrett foul No. 3. His fourth foul, just 48 seconds later, came when Garrett gambled on a steal and was called for a foul instead.

When the whistle blew, the ever-steady Garrett reacted with more emotion in the 30 seconds that followed than he had shown throughout the season’s first six games combined.

Part of it was the natural reaction of the KU junior believing he had not committed a foul. The other part of it was an intense conversation with senior guard Isaiah Moss about the defensive assignments that led to Garrett being in position to foul.

Asked after the game which session of pine time was tougher on his mentality, Garrett, who played just 29 minutes on a night when Agbaji and Devon Dotson both played all 45, said sitting early in the second half made him more uneasy.

Whether it was while playing to avoid his third foul in the first half or trying to stay away from disqualification in the second and OT, Garrett said he did not change the way he defended because he prides himself on playing defense without fouling.

“So I just tried to play defense the same,” he said with a smile.

While the Jayhawks did a good enough job defending Toppin with Garrett out of the game to survive — Self said KU “kind of pieced it together until he was back in there” — it proved to be Garrett’s contributions on the offensive end that saved the Jayhawks the most.

Four of Garrett’s 18 points came in the aftermath of Kansas falling behind 66-58 with less than eight minutes to play in regulation.

His first bucket of the stretch, on a hard drive to the rim, pulled the Jayhawks within 4. His second, on an uncontested layup on a pass out of a double team from Udoka Azubuike, tied the game at 66 with 4:01 to play.

As if that were not enough, Garrett helped Kansas regain the lead two possessions later when he fed Azubuike for 2 of KU’s whopping 52 points in the paint and a 68-66 Kansas lead with 2:25 to play.

The Jayhawks never trailed again, and seven minutes and 25 seconds of game time later Garrett and his teammates were celebrating their Maui Invitational title.

Marcus has grown so much over the years. I remember when the only reason he was on the floor was for defense and he was pretty much a nonfactor on offense, especially from beyind the arc. Now hes a staple of our offense. 50% fg and 10 points per game this season. He drives so much better and shoots the three ball with more confidence. We wouldnt be 6-1 without him.

Garrett is amazing. He's starting to hit jumpers better this year and also better at the line. Considering he draws the toughest defensive assignment in most games, its incredible that he still can put up 18 points like last night. Really proud of him!

2] I guess there's no question where Devon is not going to be next year!

3] I think the new 'doo is the key to Marcus turning into Oscar Robertson.

4] My only question, why did it take four years to teach Dok to keep his elbow in during foul shots?

5] If I could have found a pair of chopsticks, I would have punctured my ear drums rather than hear Walton say one more word!!!!

6] The way Dayton played yesterday, not many teams in America would have beaten them. Impressive win for Kansas.

Multiple thumbs up on no. 7. I don't care who the announcer is but Walton and Vitale are more about themselves than the game. They are a distraction. I'd rather listen to the home announcer from the opposing team.

1) You have to admire Dave Pasch for putting up with Bill the way he did. Able to throw in the Bill put downs without Bill even knowing he was getting burned. 2) Jay and Dan continuing to slam Bill during the Dayton game. 3) Sites like this: https://awfulannouncing.com/espn/bill-walton-compares-kansas-basketball-to-various-parts-of-hawaiian-nature-terrifies-children-on-maui-beach.html

When will the FREE SILVIO t-shirts come out . He played 1 minute against Dayton . Self is known not to play a player if he doesnt trust him ......he wants experience on the floor . Well Enaruna and Braun ..freshmen i might add get more minutes than Silvio ...Silvio was a beast his freshman year .......now he cant get off the bench . Silvio stated I WANT TO BE A JAYHAWK his reward .....sitting on the bench

Self puts the best team on the floor. Give Silvio some time. He sat out for a very long time. When he's the best option, he'll be in the game. Until then, not.

Hey Tony, BILL WALTON FOR PRESIDENT!👍🎉🎊 Of the I CAN'T SHUT MY MOUTH! club. You should lay off of Bill. He hung out with Radagast in his younger days (Too many shrooms).

I'm really happy for Marcus - but I always believe in him. He will only get better from here. We've seen his will to improve his O, assists. He's very important to this team. Agbaji will fill Marcus' role in no time.

I could see Marcus on the KU bench, or at least on the staff, when his basketball days are done.

I was listening to the Atlantis goofs during one of the games. They listed their Final Fours. Not one of them had Kansas. Then I heard Fran Fraschilla day there were no really powerful teams. He is such a Kansas hater.

It's early. Focus is typically on recruiting success. Experience and talent take a back seat. Let the games tell the story.

Fran picked KU to win the title back in 2008 when most were picking someone else. Just because they don't think you're the best doesn't mean they hate you.