Lahaina, Hawaii — Things could not have started much better for underdog Chaminade on Monday night at Lahaina Civic Center in Round 1 of the Maui Invitational.

And the Silverswords were still down by 20 at halftime.

The final 15 minutes of the first half were all No. 4 Kansas needed to claim control and overwhelm the Division II host school in a 93-63 victory that pushed the Jayhawks into Tuesday’s semifinals.

Never was that more evident than late in the first half, when KU sophomore Ochai Agbaji turned in the highlight of the game somewhat by accident. 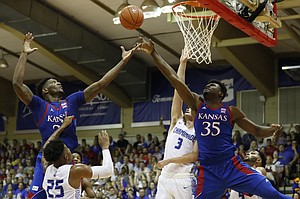 After a loose ball hot-potatoed its way into Agbaji’s hands near midcourt, the KU guard who has struggled in transition for much of the season made up his mind that this trip down the floor would be different.

After a few dribbles and a cut to the left to reestablish proper footing, Agbaji rose toward the rim and did not stop until both hands were on the rim and the ball was falling through the bottom of the net.

That play was one of several highlights for Agbaji in this one. After shooting just 3-of-17 from the floor in the past two games, the sophomore from Kansas City, Mo., made four of seven in Monday’s first half, including three triples, to help lead the Jayhawks (4-1) to the comfortable victory.

“That dunk he made in transition was pretty impressive," KU coach Bill Self said after the victory. "Those plays obviously give you confidence and he seemed to have a lot more tonight.” 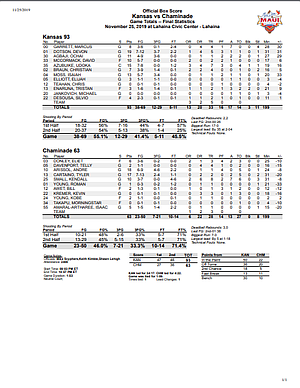 Self said before the tournament started that he hoped that Agbaji would “bust out” while in Maui.

Agbaji’s father, Olofu, said before the game that his son’s focus during his mini-slump had been on playing the rest of the game the right way and not worrying about his shots.

He was far from alone in pacing the latest Kansas victory.

Sophomore point guard Devon Dotson tallied 19 points and five rebounds in 31 minutes, junior Marcus Garrett chipped in with eight points, four rebounds and seven assists and all three players were huge in a 24-3 first-half run that turned a 7-3 Chaminade lead into a 27-10 Kansas advantage and featured 17 consecutive points from the Jayhawks, including back-to-back 3-pointers from Agbaji and Isaiah Moss that kickstarted the spurt.

Kansas shot 55%, forced Chaminade (2-1) into 27 turnovers and showed several times throughout the second half that their intention was to compete no matter what the scoreboard said.

On one possession, with KU leading by 28, both sophomore David McCormack and freshman Tristan Enaruna got on the floor for a loose ball to try to save a possession.

“It’s a part of our culture," McCormack said of competing possession by possession without worrying about what it says on the scoreboard. "Like coach always talks about, the difference between trying and competing. Competing is actually having about production. Not just thinking about going for a loose ball, but making sure that you dive for it or try to save it. That’s just the culture we have on our team.”

Moss, who had been bothered by that injured right hamstring, also showed similar desire, sprinting to race down a bouncing ball near mid-court midway through the second half and finishing a tough layup in transition right after.

“I actually thought he looked the quickest he’s looked since he pulled his hamstring," Self said of Moss. "To me, the best play was when he ran down the loose ball because he kind of had to stretch out to do that and that should give him some confidence, as well.”

It was no coincidence that most of KU’s best basketball in the first half came with just one big man on the floor.

Self did his part to snap the Jayhawks out of their early funk. After starting McCormack at the 4 for the fourth time in five games, Self quickly yanked the 6-foot-10 forward in favor of 6-9 forward Silvio De Sousa after just 90 seconds.

De Sousa fared only marginally better during the next 90 seconds and Self benched him at the 16:19 mark of the first half. Kansas played just the first 3:41 of the game with two bigs and did not go to that lineup again.

Both McCormack (10 points in 17 minutes) and De Sousa (4 points in 11 minutes) played throughout the final 36 minutes of the game, but both did so as the lone big man in KU’s various four-guard lineups.

As usual, though, that look was best with KU’s biggest player on the floor. And the first eight minutes of the second half were all about Azubuike.

“Obviously having him on the court for us is great," Moss said of Azubuike. "He’s pretty much unstoppable. You could see that in the second half.”

After failing to register a shot in seven first-half minutes because of foul trouble, Azubuike delivered four vicious dunks on four attempts in the early minutes of the second half, to ensure that Kansas never was threatened. The KU 7-footer finished with 15 points and seven rebounds in 19 minutes.

The best of the bunch came on a pick-and-roll lob from Garrett that put Kansas up 61-33. But the highlight for the pro-Kansas crowd, as has come to be the case, was Azubuike’s made free throw in the opening minute of the second half.

“There were probably 2,000 Jayhawk fans here," Self marveled. "Which is unbelievable for a fan base to travel like that. It’s amazing how much support we get wherever we travel, but our fans love coming over here.”

KU’s victory came on the heels of a Virginia Tech upset of No. 3 Michigan State, eliminating the potential for the two Top 5 teams to meet up in the championship game.

“We (knew that was possible) with them being the other high seed in the tournament,” Agbaji said. “But we’re going to take it game by game and see wherever the tournament takes us.”

One game down, two to go.

The BYU-UCLA game was not complete by Journal-World press time.

“We’ll look forward to playing whoever we get," Self said after Monday's victory. "Because we know either one will be a tough opponent.”