Of course the Jayhawks do. The problem is the offense has performed so poorly lately that KU hasn’t had much luck featuring its most versatile skill player.

“We didn't necessarily execute what we needed to do up front to have success,” KU head coach Les Miles said this week, when asked what led to a 12-carry, 26-yard day for the preseason All-Big 12 back in a loss at Oklahoma State.

Pretty much nothing worked offensively for the first three quarters of KU’s second loss in a row, with Williams’ 2.2 yards per carry one of many concerns.

“We could never get that going,” Adeniji said in reference to KU’s season-low 39 rushing yards at OSU.

The Cowboys, according to Adeniji, kept “imposing their will defensively” as KU offensive linemen failed to execute on the checks they have in place to handle pressure from outside.

“We’ve got to get the run game back on track,” Adeniji stressed. “If we can do that, then everything else will open up. But that’s where it starts, and it starts with the offensive line.”

Williams, who is averaging 4.9 yards per carry and has rushed for 100-plus yards three times this season (and 99 in his sophomore debut), appeared disappointed at OSU. He wasn’t the only one.

“I was frustrated for him, that we couldn't get him going,” said senior quarterback Carter Stanley. “And that's just everyone involved. We’ve all got to do our part to get a special player like him going in games like that, so it was frustrating. But he's got a short-term memory and he’ll bounce back.”

Iowa State ranks 25th nationally in rushing defense (121 yards per game allowed) and is giving up 3.59 yards per carry (32nd).

2. Find some consistency on offense

In back-to-back losses to Kansas State and Oklahoma State, the KU offense has traveled fewer than 10 yards on 12 separate drives. They scored just three touchdowns combined in the defeats.

Since offensive coordinator Brent Dearmon took over at the midway point of the season, the Jayhawks have emphasized the offense typically thrives when it plays with tempo. But picking up the pace doesn’t do you much good if you’re punting far more often than you’re extending drives.

Miles didn’t call out the offense’s effort after the OSU loss. Rather, the head coach pointed to perhaps the Jayhawks’ most obvious flaw.

“I think that if we continue to pursue what we're doing, I think we'll be fine,” Miles said. “It's just that it's consistency's the issue.”

“You have to get into a rhythm to be able to go tempo,” Adeniji said of one critical hitch to KU’s ideal game plan. “You have to start better offensively to go into that tempo.”

The senior offensive lineman said stringing together explosive and efficient plays will allow the Jayhawks to find that elusive sweet spot.

The name Breece Hall isn’t one that’s well known outside of Ames, Iowa. But the way the ISU freshman running back is playing lately, most Big 12 fan bases will remember it by the end of this season.

A 6-1, 205-pound true freshman from Wichita Northwest, Hall began to take off in October after playing a lesser role in the first five weeks. Then came Hall’s breakout game against West Virginia, when he ran for 132 yards and three touchdowns.

Big 12 defenses haven’t been able to shut him down since. In Iowa State’s past five games, Hall is averaging 120.4 yards a game — the fifth-best mark in the country in that span among Power Five backs — and 5.7 yards per carry, with seven rushing touchdowns. 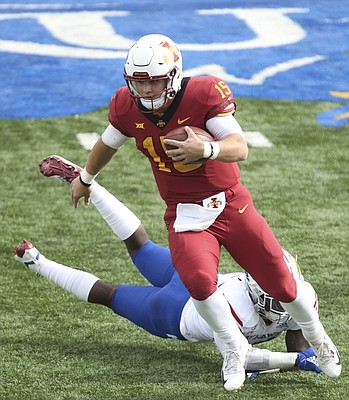 What do Ohio State’s Justin Fields, Clemson’s Trevor Lawrence and Oklahoma’s Jalen Hurts all have in common?

For one, they’re among the only players in the country who have passed for at least 22 touchdowns and rushed for at least seven. The other QB who can lay claim to those numbers is Iowa State’s Brock Purdy.

The 6-1, 210-pound sophomore does it with his arm and his legs, and is the latest mobile QB looking to give the KU defense fits.

From Hurts, to the Longhorns’ Sam Ehlinger, to K-State’s Skylar Thompson, to Oklahoma State’s Spencer Sanders — even Tech’s Jett Duffey — quarterbacks who can move have found space to run and/or scramble and throw effectively versus KU.

Purdy, who has twice this year finished with six total touchdowns (against Louisiana-Monroe and Oklahoma), will look to keep the Jayhawks out of sorts.

The Cyclones’ offense has pulled that off against most teams. ISU heads into its home finale in Year 4 under head coach Matt Campbell ranked eighth nationally in passing offense (326.3 yards per game), 12th in yards per snap (6.77), 14th in total offense (477.9 yards per game) and 24th in scoring (35.1 points per game).

Purdy’s targets have made that possible, as the Cyclones are one of 10 teams nationwide that can boast three players with 40 or more catches this season: senior receiver Deshaunte Jones (63), senior receiver La’Michael Pettway (42) and sophomore tight end Charlie Kolar (41).

For weeks, the Jayhawks refused to rule out a bowl berth, but their postseason dreams were officially dashed at OSU in their seventh loss of the season.

“I mean, it is tough. It stinks,” Stanley said of being eliminated from bowl contention. “But if you still look at it there hasn't been a football team here that's won four or five games in 10 years, I think.”

“So that's at this point what our goal is,” Stanley said of potentially giving KU its best record since. “Just to make our mark on this place, this senior class at least. To make our mark and finish it better than what we found it.”

This is a disciplined team like K State that will be focused totally on us. No way we score 20. I'd be delighted to be wrong.

They'll get two field goals in the first half and after the game is beyond winning they'll get a couple of pointless TD's late in the fourth quarter.

Shows you what I know. So let me go on record as saying that there's no way we score 40 on Baylor next week :-).

Let Dearmon call the offensive plays the entire game and see what happens. What is there to lose at this point?

Has Dearmon not been calling the plays since he was promoted?

To say that we need to establish the run game seems misguided. When we first started having O success in the middle of the season (and at BC) the commentary from the team was that the offense was doing the opposite of what the opponent was setting up to defend. At this point, aren’t D stacking the box daring us to beat them through the air? The effective counter is for Carter to complete 70% of his attempts for 5-10 yds per catch. If that happens then D’s will have to move defenders into coverage and create space for Pooka, etc.

I don’t have high expectations for stopping ISU. I’m more concerned about whether we can move the ball.

Will Matt Campbell will be in Ames next year? The Cyclones have lost 3 games by a combined 4 points and their biggest loss was to the Cowboys by a TD. Were it not for a botched pass interference call against Oklahoma they could be in line for the conference title game.

The keys for KU having any chance of winning this game:

If these things don't happen, we won't win unless Carter goes for 400 plus yards without an INT and Pooka goes for 200 yards, then it will be a matter of who scores the most.

It's not easy. We decimated at linebacker and the secondary due to injuries. But the guys are going to have to overcome that if they're going to have a chance and the offense needs to score at least 35 today and have possession for at least 35 to 40 minutes. I would say we win this game 1/10 times at this time. In two years, if we get the right personnel on defense in particular, I'd say we win this game 9/10 times.