Kansas guard Devon Dotson (1) alerts the defense during the first half on Tuesday, Nov. 19, 2019 at Allen Fieldhouse.

It was an ugly win, but a win nonetheless for Kansas as the Jayhawks defeated East Tennessee State 75-63 in the campus-round contest of the 2019 Maui Invitational Tuesday night.

However, even though the Buccaneers stuck around early, KU took control midway through the first half. Withe Jayhawks up by as much as 18 points, KU seemed to once again be taking care of an early-season non-conference opponent at home.

Leading the way was sophomore point guard Devon Dotson, who finished with 19 points, 13 of which were in the first half. Senior center Udoka Azubuike (21 points, seven rebounds) and junior guard Marcus Garrett (13 points, six rebounds) also were key contributors.

And while KU continued to look strong out of the break, around the 12:00 mark was when ETSU finally retaliated to get back in the game. The Buccaneers cut the lead to 61-56 with less than six minutes to go, the closest margin since the 14:04 mark of the first half (KU led 13-8).

But a timeout from coach Bill Self seemed to calm the Jayhawks down after the Buccaneers were continuing to capitalize on newfound momentum.

Following the break, the Jayhawks seemingly got back to their level of play from the first half to extend the lead back to double-digits, and more importantly for KU, secure the win. 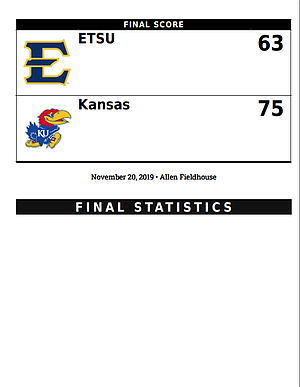 Leading 63-56, the Jayhawks needed a stop to slow down the surging Buccaneers. And that’s exactly what they got as Dotson forced another turnover to set up another KU fast break.

On the other end, Dotson found junior forward Silvio De Sousa for a two-handed dunk to bring both the energy back up and force a timeout from ETSU.

There was still work to be done, but this play seemed to add some much-needed juice to reinvigorate KU’s offense which, at the time, was struggling.

One of the key aspects of the game that the Jayhawks dominated was in transition, where KU scored 14 points off the fast break. And while it wasn’t a fast break, there was a wild finish from sophomore guard Ochai Agbaji in transition that particularly stood out in the first half.

With KU leading 21-10, Azubuike corralled a defensive rebound and quickly kicked it out to Dotson. As the Jayhawks raced down the other end, Dotson dished it off to Agbaji for the layup. However, Agbjai had get a little creative as he was immediately met by ETSU defenders.

Agbaji took a dribble, then contorted his body under the rim and behind the backboard for a contested layup that somehow went down. 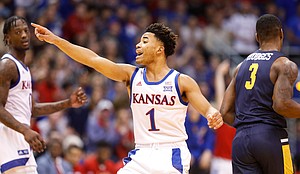 ETSU was sticking around to begin the game as it trailed KU 9-8 early-on. ETSU guard Bo Hodges grabbed a defensive rebound and came back down the court to potentially grab the lead. As Hodges threw a pass to his right, though, Dotson was there, jumping the passing route much like a cornerback on a football field.

Dotson ran back down the other end for an easy layup and gave KU the 11-8, setting the defensive tone for the night. This was the first turnover forced by KU, and the Jayhawks finished with [14] steals and forced [16] turnovers.

Kansas takes on Chaminade in the second round of the Maui Invitational on Monday.