Kansas City, Mo. — After a scoreless first half, Kansas soccer searched for one slight misstep from the TCU defense. And in the 55th minute, that came in the form of junior forward Mandi Duggan sneaking a shot inside the near post for a go-ahead goal.

That lone goal was enough for No. 5 seed KU to secure a 1-0 victory over No. 6 seed TCU in the Big 12 Championship final Sunday at Swope Soccer Village.

“I got the ball one-on-one on the right-hand side, and I just went straight at (the defender) and beat her,” junior midfielder Ceri Holland said. “Mandi made a great run at the near post and I just drove it in and she put in an unbelievable finish.”

“It’s an unbelievable feeling and something you work for all year,” Holland said. “We came here and we knew we could do something and we knew it was there for the taking.”

Coming off a 2-1 double overtime victory over No. 1 seed Oklahoma State Friday night, KU wanted to make a statement in the championship match against TCU.

And while that turnaround was a bit different than the normal Thursday/Sunday schedule, KU coach Mark Francis said the team focused on recovery and having a high energy in the final.

“I know for TCU they probably had to win this to get into the tournament,” Francis said. “So you know they’re going to be up and there’s going to be high energy from them, so we had to match that.”

In the first half, though, it was deadlocked between the two sides as neither the Jayhawks nor the Horned Frogs could manage much of anything on goal. The lone shot on goal came on a header from KU sophomore defender Grace Wiltgen in the 12th minute.

However, there were still plenty of opportunities for either side to strike first before halftime.

Take the frenzy in the 15th minute, as TCU senior midfielder Tara Smith stole a pass in the midfield to set up a counter attack. Smith sent the ball wide to freshman forward Grace Collins, who whipped a shot across the face of goal, making its way past KU sophomore goalkeeper Sarah Peters and around the far post.

KU also had plenty of opportunities. In the 18th minute, Holland sent a cross into the box that found senior midfielder Sophie Maierhofer, who shot a strong header that deflected off the crossbar.

Shortly after, Holland sent in a cross that redshirt freshman defender Chais Wright couldn’t get on the end of in the 19th minute. Less than a minute later, senior forward Katie McClure sent a header just off target.

“The longer the game goes on, you wonder if those are going to come back and haunt you,” Francis said.

So unsurprisingly, TCU and KU were deadlocked at five shots apiece — and more importantly 0-0 — at the halftime break.

“It was there for the taking, and coach (Francis) said that to us at halftime,” Holland said. “I think everyone was hungry for it, and that’s what was shown in the second half.”

Holland and KU came out even more aggressive in the second half, as the midfielder stormed into the box, sending a shot across the face of goal that was deflected for a corner kick.

Both Holland and Francis mentioned attacking the TCU defense out wide in the final third of the field, which is exactly how the Jayhawks finally broke through with Duggan’s goal in the 55th minute.

And with the goal, the tension seemed to die down a bit too. Holland even cracked a smile as she continued to make runs upfield and sent in a shot on goal in the 68th minute.

“When you play in something like this, you’ve got to have fun with it and you’ve got to enjoy the moment,” Holland said. “We all had fun out there today, and I think that’s why we won the game.”

Still, TCU had opportunities to equalize. Whether it was off corner kicks, a free kick after Holland’s yellow card or sophomore forward Messiah Bright’s shot just over the crossbar in the 82nd minute, the chances were there for the Horned Frogs.

Then there were the two scrums in the box in the 87th and 88th minutes. The first came off a corner kick from TCU, with Bright and junior midfielder Yazmeen Ryan unable to put a goal away.

Less than a minute later, freshman midfielder Michelle Slater and Bright couldn’t find the back of the net even with Peters out of goal.

“That last 10 minutes, they were throwing everything at us — long throws, corners, free kicks,” Francis said. “And the kids just did a tremendous job throwing their bodies in front of the ball and just battling, getting to the second balls.”

Regardless, KU’s bend-don’t-break defense held on just enough to secure the victory and the Jayhawks’ first Big 12 Championship title. Francis said he’s most excited for the seniors on this KU team.

“This senior class will go to the NCAA tournament three times in their four years, which is pretty phenomenal,” Francis said. “No other group that we’ve had has ever done that, and I think they’ve really set the tone for the program in terms of expectations.”

KU will next play in the first round of the NCAA tournament on Friday.

Congratulations, Jayhawks! Great win for the team and program! Love listening to the excellent play-by-play game calls by Jack (I can never make out his last name), who brings me to the edge of my seat throughout, and never more so than during the final five minutes of this one. Good luck in the big dance!

The last five minutes were bananas...how can the article not mention the ball off our bar with five minutes left...crazy stuff!!! Loved that I could watch the game on television, such a treat!!!

Fan-flippin-tastic! Get them trophies. Keep it up, ladies!

Congratulations to the Big 12 tournament champs! Rock Chalk. It was a very exciting and intense game because TCU played most of the match on KU's side of the field. TCU had so many more opportunities to score than KU, especially in the second half. I had expected TCU to tie it up on multiple occasions, but kudos to KU's goaltender and the defense in general. P.S. Did not see our AD at the game. Was there a Jeff Long sighting?

I don't know about during the game, but this looks an awfully lot like him afterwards. 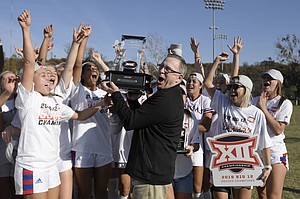 Soccer, to put it nicely, is not my favorite sport, but Big 12 championships never get boring. Congratulations, Jayhawks.

The goal by Dugan was a cannon and the entire play was beautifully setup. Nice environment at the stadium on a beautiful day. All made better with a Trophy! Great job KU Soccer!