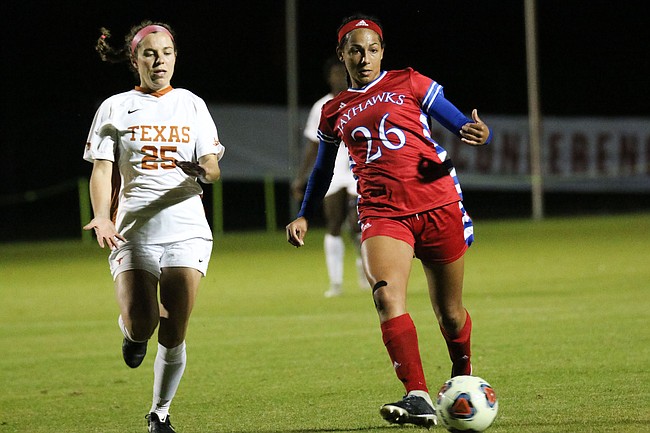 One of three Jayhawks to be named to the All-Big 12 teams on Tuesday, Kansas soccer senior Addisyn Merrick was named the Big 12 Defensive Player of the Year.

Merrick made the All-Big 12 first team, where she was joined by senior forward Katie McClure, a unanimous selection.

KU junior midfielder Ceri Holland made it on the All-Big 12 second team.

Merrick, from Lee’s Summit, Mo., became the second Jayhawk in program history to be named the league’s defensive player of the year, joining Kayla Morrison who received the honor in 2017.

With her pick to the first team, Merrick also claimed all-league honors for the second time. Merrick also was named to the All-Freshman team three years ago.

The senior defender started all 19 games in this season for KU, which has eight shutouts and has allowed 17 goals this season to date.

McClure, of Wichita, landed on a Big 12 postseason team for the third time in four seasons (second team in 2018, All-Freshman Team in 2016). McClure was one of four unanimous first team selections. She ranks second in the Big 12 this year in goals (14), points (35) and shots (88), and is tied for the league lead in game-winning goals (6). McClure’s seven assists in 2019 rank fifth in the Big 12.

Holland earned conference postseason honors for the second time after earning All-Freshman honors two seasons ago. The midfielder from West Yorkshire, England, has scored eight goals and added four assists to go along with 55 shots this season, all career highs.