‘Hot Tickets,’ a new book that investigates the KU ticket scandal, to be released Monday 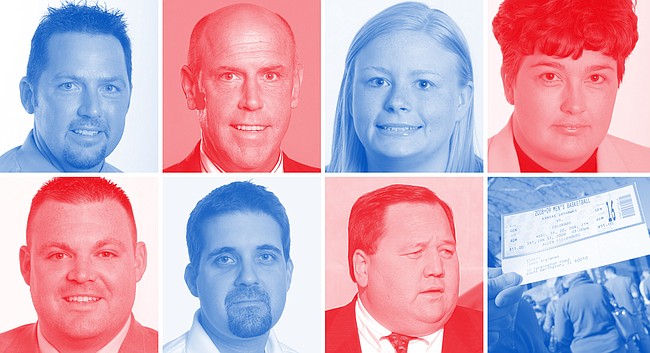 First, the remodeling of the ticket system from legacy-centric to donor-centric; second, hiring new people and not properly vetting them; and third, a poor accounting and oversight system.

“I think that’s where the problems were,” Frederickson said Thursday in his KU office, two stuffed project boxes filled with material from the scandal lying on the ground across from him.

After years of investigation, Frederickson’s book covering the scandal — “Hot Tickets: Crimes, Championships and Big Time Sports at the University of Kansas” — will be released on Monday, Nov. 4. 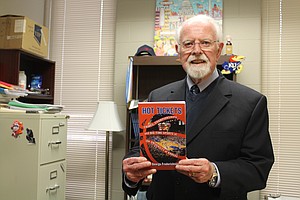 The KU ticket scandal involved the looting of an estimated $2 million to $3 million by employees of KU Athletics who stole and sold basketball and football tickets to personally enrich themselves. The scandal became public knowledge in 2010 after it was revealed that the FBI and Internal Revenue Service were investigating the matter, yet the scandal had been occurring for years in the decade before. Frederickson picks apart these complicated crimes and the involved criminals in his book.

“I first thought of writing a little article. Or maybe a midlevel article,” he said in an interview with the Journal-World. But he felt he could not adequately develop the “unique personalities and characteristics” of the various players in an article.

The book became Frederickson’s retirement project, and he “could not get enough of it.”

“I found myself reading and taking clippings from the four largest newspapers in Kansas and two largest in Missouri, and The New York Times and the Washington Post,” Frederickson, 85, writes. “One thing was clear; I had found my retirement project, or it had found me.”

The detailed coverage in “Hot Tickets” exemplifies Frederickson’s investigative work. He dives into the background on the whistleblower, a criminal himself who was seeking a shorter jail sentence for a housing scandal in Junction City. He provides detailed information about then-Athletic Director Lew Perkins, whom Frederickson considers one of the “three principal characters.” (Perkins, however, was not criminally implicated in the scandal. He stepped down as athletic director in September of 2010.) Frederickson even includes a whole chapter dedicated to the history of Lawrence and a description of Massachusetts Street.

One of the things Frederickson found most interesting in his research was how the home life of Charlette Blubaugh might have affected her actions at work. Frederickson devotes a chapter to Blubaugh, calling it “When Home Becomes Work and Work Becomes Home.”

“She didn’t find her role as a mother fulfilling,” Frederickson said. “She liked going to work. Loved her colleagues. I think that is considerably more common than we know.”

Frederickson, who teaches social equity and studies fairness among races and genders, found her story particularly fascinating, and supposed she joined the ticket office because “it was the only place she could move up” in the hierarchy. But “it turns out she really was a ruthless crook,” he said. “She took terrible chances and was no doubt going to get caught.”

To differentiate the individuals involved in the scandal, Frederickson splits them into different “cells.”

Frederickson splits them into three cells: the Jones Cell, the Ticket Office Cell and the Blubaugh Family Cell. He got the idea from one of the criminals themselves.

“One of the guilty, one of the five who went to prison, said the way to think about it is three overlapping spheres, and here’s who belongs in each of these spheres and what they do,” he said. “I ran with it and made it work. And I think it enriches the story.”

At the end of his book, Frederickson tells readers where the various criminals are now. They are all out of jail. Based on information he heard a year ago from an attorney, only one of the criminals is “whole,” meaning the rest are still paying restitution to KU.

Frederickson also said he doesn’t believe something like this could happen again at KU.

“I think KU has cleaned up its act,” he said, referencing the ticketing office.

Frederickson used newspaper clippings, online court records, history books and interviews with those involved for his book. He traveled to Oklahoma, the home state of many of the criminals involved, and even visited Oklahoma’s El Reno federal prison multiple times, where Jones and Tom Blubaugh were imprisoned.

“See those two project boxes? That’s all the primary material,” he said Wednesday, motioning to the two packed boxes in his office. He has a file on every individual.

“And each of the files is probably this thick,” he said, showing about an inch of space between his thumb and index finger.

In Frederickson’s office above the project boxes were some wooden cabinets, on which Frederickson said he had made a paper timeline to help keep various events in chronological order.

Although Frederickson said he didn’t have any pushback from KU, “they would rather it not be published.”

“I soon learned that the Athletic Department and the senior administration of the university would just as soon not have this story be told,” he said. “It doesn’t reflect the university at its best. And I understand that, but it made the research much more challenging.”

This was Frederickson’s first time writing a “popular” work. In the past, he’s published scholarly work in his field, public administration.

“I don’t think it was easier or harder,” he said. “It was just differently easy or hard. New.”

He had to learn on the go, and even employed the advice of a journalist when he was having trouble getting sources to respond.

“But that was part of the idea, challenging myself. I don’t like cruising. I’d rather be active,” he said.

And active Frederickson is. He’s currently saving newspaper clippings related to the NCAA investigation into KU. He supposes he may eventually write a short piece on that. But for right now, he’s busy with the release of “Hot Tickets.”

“Hot Tickets” will be available at The Raven Bookstore and the KU Bookstore in the Kansas Union. Frederickson will have a reading and signing event from 6 to 8 p.m. Monday, Dec. 9, at the KU Bookstore.

It seems ironic and funny that the guy who writes a book about theft by KU employees gets paid to teach students about social equity and fairness between races and genders. Two different ways to rob people of their money I guess.