Kansas forward Silvio De Sousa (22) laughs on the bench with his teammates during the second half, Thursday, March 8, 2018 at Sprint Center in Kansas City, Mo.

The wait is over. Kansas forward Silvio De Sousa will play basketball for the Jayhawks next season.

After being suspended by the NCAA for two seasons on Feb. 1 because of his guardian, Fenny Falmagne's role in accepting money from a former Adidas executive who later was declared a KU booster, De Sousa on Friday morning finally had his appeal heard by the NCAA’s Student-Athlete Reinstatement committee.

By noon, after a 9:15 a.m. teleconference that included De Sousa, his attorney Scott Tompsett and KU administrators once again pleading his case from an office on KU’s campus, De Sousa received the ruling he was waiting on and officially was cleared for competition.

“We won,” Tompsett said in a text to the Journal-World.

In a phone interview with the Journal-World early Friday afternoon, Tompsett said simply, “I am so happy for Silvio. The NCAA got it right.”

KU coach Bill Self, who has been on vacation with his family in Australia, found out the news in the middle of the night on the other side of the world and promptly released a statement voicing his elation as soon as he could.

“I am extremely happy for Silvio, and very appreciative of (KU AD) Jeff Long and our athletic department personnel who have worked so hard on this," Self's statement read. "Our chancellor, school attorneys, Scott Tompsett and David Reed (Senior Associate Athletics Director, Compliance and Student Services) have spent so many hours on this matter."

De Sousa, who was bombarded with well wishes on social media as soon as Friday's news broke, spent the bulk of the early afternoon responding to KU fans, along with friends and family, with his appreciation for both the ruling and the support he received through the 17-month process.

Said De Sousa in a news release: "I'm so excited to be able to come back to Kansas to play and to continue my education. It's an amazing feeling. I want to thank the NCAA committee for the opportunity to do what I really want to do. All those days and nights wondering what would happen, this makes it all worth it. I also want to thank everyone at Kansas for working so hard to make sure I can follow my dream. Jayhawk Nation, I can't thank you all enough for the unconditional support and for sticking around throughout this. I tried to turn the year off into a blessing. I got to work on my game and my academics, and now I'm going to make the most of this opportunity." 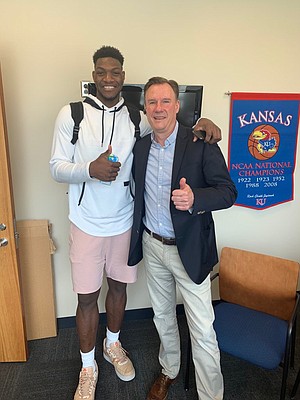 "Kansas men's basketball student-athlete Silvio De Sousa is eligible to play the upcoming season after sitting the 2018-19 season due to NCAA rule violations. Kansas appealed the NCAA staff decision of a two-season withholding to the Division I Student-Athlete Reinstatement committee, which determined additional relief was appropriate."

Throughout the process, which dragged on multiple times and in many different ways, KU officials, including head coach Bill Self, called the case “complicated” and insisted that both the school and De Sousa were cooperating with the NCAA in every way possible to try to get a resolution.

De Sousa, Self, Long and others were outspoken about De Sousa’s innocence in the matter and often spoke with conviction about their belief that the 6-foot-9 sophomore forward was being unjustly punished.

The NCAA saw otherwise and, in early February, officially declared De Sousa ineligible for the remainder of the 2018-19 season and all of the 2019-20 season.

At the time, Long said he was “incensed” by the NCAA’s decision to suspend De Sousa and proclaimed that day and in the months ahead that he and KU were “determined to fight for Silvio and for fairness.”

On April 18, KU formally filed an appeal of the ruling, “challenging the two-season penalty De Sousa received from the NCAA for alleged violations that he was unaware of and from which he did not benefit.”

A day later, De Sousa and Tompsett, in an interview requested by the Journal-World, explained why they believed De Sousa had a strong shot of winning the appeal and indicated that a ruling could come as soon as the following week.

But further delays surfaced from there which actually led to KU resubmitting the appeal, and, 35 days after De Sousa first spoke publicly about his suspension, the KU forward received Friday’s news that he would be eligible to play for the Jayhawks during the 2019-20 season.

"Silvio has been unbelievably upbeat and patient throughout this process — far more than I could be if I were in his shoes," Self said. "And he has been a tremendously positive influence on me, our team and everyone he has touched since getting the initial ruling. Silvio is the type of student-athlete that college athletics needs."

De Sousa, who declared for the 2019 NBA Draft on April 19, said then that he wanted to return to KU and would do so if he won his appeal.

De Sousa spent the past couple of weeks showcasing his skills and working out for NBA teams but fully intends to return to Kansas for what will be his junior season.

"I am thrilled by the decision of the NCAA Student-Athlete Reinstatement Committee to reinstate Silvio," Long said Friday. "And I am thankful that Silvio has the opportunity to continue his academic work and play basketball for KU. He is an exceptional young man, and I am so happy that he gets to do what he truly wants to do, which is study and play basketball at KU."

Thus ends a saga that began with De Sousa committing to KU in late August of 2017 and enrolling at Kansas a semester early in time to play for the Jayhawks during the spring semester of the 2017-18 season.

After a slow start that saw him struggle to get off the bench, De Sousa became a massive part of KU’s run to the 2018 Final Four, playing monster minutes in both the Big 12 and NCAA Tournaments in place of the injured Udoka Azubuike.

During his lone semester of his freshman season, the 6-foot-9 forward from Angola, who played high school ball at IMG Academy in Bradenton, Fla., appeared in 20 games and averaged 4 points and 3.7 rebounds in 8.8 minutes per game. Those numbers included postseason averages of 7 points and 7 rebounds in 15 minutes per game, a run that set the stage for what De Sousa believed would be a breakout sophomore season.

But that opportunity never came. One day before KU’s exhibition opener against Emporia State last season, the Jayhawks announced that they would hold De Sousa out while investigating new information that surfaced in a highly publicized trial in New York over corruption in college basketball recruiting.

De Sousa, who practiced and traveled with the team all season, sat out both exhibition games and never played a minute of the 2018-19 season.

Self, along with the tens of thousands of Kansas fans who rejoiced over Friday's news across social media, made it clear Friday that De Sousa's return to the court would be a big deal for the program, the fan base and De Sousa himself.

"He wants to be a student and contribute to representing this university on the court," Self said. "This moment belongs to Silvio and I am proud to be his coach. I know he’ll be more motivated than ever, which will be very exciting for all Jayhawk fans to watch next season."