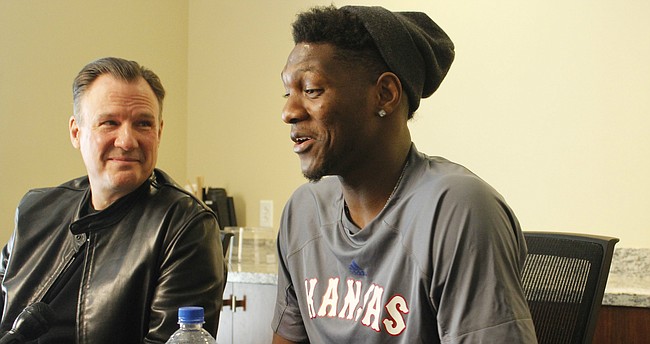 University of Kansas sophomore forward Silvio De Sousa speaks with media members on Friday afternoon, April, 19, 2019, for the first time since the NCAA ruled him ineligible for the 2018-19 and 2019-20 seasons. De Sousa, seated next to his lawyer, Scott Tompsett, said he will enter the 2019 NBA Draft, but will return to the Jayhawks if KU's appeal, submitted in mid-April, regains him eligibility.

According to a report from CBS Sports, the appeal hearing for Kansas forward Silvio De Sousa took place Friday morning and a ruling could come in a matter of hours.

A source confirmed to the Journal-World that the hearing with the NCAA’s Student-Athlete Reinstatement committee took place at 9:15 a.m. via teleconference.

KU is appealing the NCAA’s two-year suspension of De Sousa, which was handed out in February as the result of the involvement of De Sousa’s guardian, Fenny Falmagne, in a federal investigation into corruption in college basketball recruiting.

KU officials formally filed the appeal on April 18 and De Sousa’s attorney, Scott Tompsett, said a day later that he could see a resolution coming the following week.

Instead, a process that had dragged on for more than a year found further delays, which led to KU resubmitting the appeal last week.

De Sousa said last month that if the appeal is granted, he will return to Kansas for what would be his junior season. That, he said, is his preference.

To cover his bases and further expand his exposure, the 6-foot-9 forward from Angola declared for the 2019 NBA Draft and now has until Wednesday to pull his name from the draft pool to retain his college eligibility.

Stay tuned to KUsports.com and ljworld.com throughout the day for updates.

Fingers crossed! Do the right thing for this young man!

This is the first time I've been optimistic about SDS, hope it works out. And not because we'll be better with him, but because it seems like a lot of people took advantage of him.

Come on NCAA! Don't take 3 months to make a decision you can make today!

FINALLY! Just remember, the NCAA doesn't like losing. In fact, it doesn't like any intrusion into their bracket selection process.