Devon Dotson still has 12 days to decide whether he will return for his sophomore season at the University of Kansas or keep his name in the 2019 NBA Draft.

On Friday at the league’s draft combine in Chicago, Dotson may have done enough to at least slightly improve his stock.

During his team’s five-on-five scrimmage the 6-foot-2 point guard produced 10 points, 9 assists and 6 rebounds in 22 minutes.

Dotson grinned shortly afterward when asked by Mark Carman of FanSided in a video interview whether he was leaning one way or another in terms of his draft decision.

“I’m not leaning any which way,” Dotson replied. “I’m just taking it day by day and seeing how everything is.”

Although Dotson went 0-for-3 on 3-pointers in the scrimmage, he shot 5-for-11 from the field overall, scoring all five of his baskets inside.

“I feel like it’s going pretty well,” Dotson added of his combine experience. “I’ve got more workouts after this and some different stuff, like a pro day.”

A day earlier at the combine, Dotson delivered one of the more impressive scrimmage highlights, coming away with a steal and proceeding to take off the other direction and finish through contact in transition with an up-and-under layup.

.@d_dotson1 goes UP & UNDER at #NBACombine Powered by Under Armour!

None by NBA Draft

During that Thursday action, Dotson scored 8 points, finished with 1 assist and shot 3-for-8 from the field and 0-for-2 from beyond the 3-point arc.

Even though he has had positive moments at the combine, it remains to be seen whether what Dotson accomplished will impress NBA executives and coaches enough to make him even an early second-round pick — most projections so far don’t list Dotson as one of the 60 draft picks come June.

ESPN analyst Jay Bilas said during the network’s live coverage of the combine he wondered whether Dotson will stay in the draft or go back to Kansas.

Dotson told reporters at the combine he has kept in contact with KU coaches this week. Assistant coach Jerrance Howard watched Friday’s action in person from the bleachers.

“They’re calling, texting,” Dotson said of his communication with KU’s coaches. “But they’re supportive. They want to see me do well and they’re OK with any decision I make.”

While Bilas named Dotson as one of the players who impressed during the early scrimmage on Friday, the analyst didn’t think that meant Dotson had played himself into a draftable position necessarily.

“It looks to me like he should go back to school,” Bilas offered, “but it’s an individual’s decision.”

Players have until May 29 to decide whether they will stay in the draft or withdraw.

Off day for Grimes

With his Gray team down 85-82 coming out of a timeout with 3.2 seconds to play, Quentin Grimes found himself setting up for an inbounds play with KU teammate Dotson defending him.

Grimes made a quick cut to run Dotson off a screen and got off a shot from the right wing that would have tied it up, but it misfired off the rim. 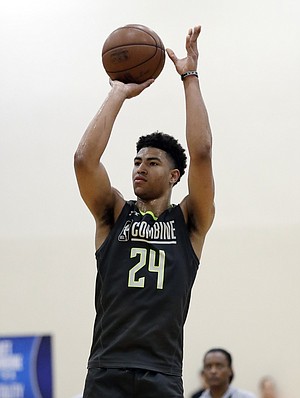 Just ahead of that, with a little more than 10 seconds to go in a one-point game, Grimes dribbled his way from a loose ball into a jumper from just inside the left elbow and missed badly to the right, with his team trailing.

After Grimes finished the outing with 1-for-9 shooting, Bilas said the draft hopeful “really struggled” and wasn’t able to properly follow up “a pretty good showing” the previous day.

ESPN front office insider Bobby Marks noted during the broadcast that back before the 2018-19 season began Grimes was considered a top-20 pick.

“Now we don’t even have him ranked,” Marks continued. “This gave him an opportunity to kind of showcase in front of NBA teams some things that he didn’t do at the University of Kansas.”

Although Marks praised Grimes for doing “a little bit of everything” in Thursday’s scrimmage, when Grimes scored 9 points and rounded out his stat line with 4 boards, 3 assists and 3 steals, he maintained Grimes is not a one-and-done type of talent.

“I don’t care what kind of feedback you get in the next 24 hours,” Marks said, adding Grimes needs to become a more consistent player.

No one on Dedric Lawson’s team played more than 21 minutes in the final scrimmage of the combine Friday, and Lawson was one of five players to log exactly that amount of time on the court as his team won, 91-74.

Lawson put up 10 points on 4-for-8 shooting and went 2-for-4 from downtown. The junior forward from KU, who projects as a second-round pick, also pulled in 5 rebounds.

I'm starting to get very concerned that Grimes is going to return and not Dotson.

I don't think Grimes will come back either way but this kid is skilled and he needs to figure it out quick.

I'd take Grimes back.

If we loose Dotson, man-o-man, I don't want to think about that. We got a legit squad next year with DD at point. Grimes is strong and plays nasty defense. I think he would improve greatly on offense with another season in Lawrence. Love to have him back.

Has someone been working with him on his shot ? If not, we need someone who can shoot consistently from 3 pt range and not Grimes ...........

Scouts are debating whether to draft him or not and "he sucks"? Did Perry Ellis suck? Travis Releford? Keith Langford? Tarik Black? None were drafted.

Doesn't seem like they're debating much at all. All of those players you mentioned were better players than Grimes is right now because they KNEW what was expected of them, what their role was, and they brought it every game. Grimes brings it once every 4 or 5 games.

Maybe they didn't have the ceiling that Grimes has, but you're not gonna tell anyone that those guys didn't do their jobs each and every time out.

As we all know, the NBA drafts on POTENTIAL more often than not. Grimes has plenty of that. But he's still not even close to the PLAYER that any of the guys you mentioned were.

Dotson should return. I always listen when Bilas speaks.

Grimes does need to come back..however, I think he made his choice to be a OAD before he ever arrived on campus...I certainly hope Dotson sees value in coming back..its one thing to look good in front of a bunch of other NBA hopefuls but its another to do it against the real deal NBA guys...guess we will have to see..

Grimes will now reap his decision for leaving. We all know it was premature, but all his decision.

Can Grimes decide to come back to KU as well ?

Or has he done something that makes him permanently committed to being a pro ?

I think Grimes can still come back if he chooses to (before the deadline).

Both players need to dramatically improve their outside shooting to have a shot at making (and sticking with) an NBA roster. Clearly, Dotson because of his speed and ability to finish with contact has a brighter future at this point but he is a small guard, while the NBA is moving towards tall players who are versatile. If you are a guard and can't shoot lights out you have little chance at making a career playing in the NBA. They could go the G-league route and focus on basketball, but you have fewer people caring about your well being outside your family. As Self said at the KU banquet he was hoping the 4 freshmen would stick together (including Grimes) and could repeat what the 2005-2006 team (with Freshmen - Chalmers, Rush, Wright, and Kleinman), which lost to Bradley (77-73) in the first round was able to accomplish two years later (the one and only NC under Self).

I've always felt Dotson will use this as a measuring stick, come back and get better. But look how great BIFM was and he's struggled to get PT in the pros. As good as Dotson was this year, he's not even close to Frank's skill level yet.

I've also always felt Grimes had such a tough time dealing with all the criticism he got and not really living up to our, as well as his, expectations, and he was gone regardless of these workouts, likely heading to the G league or overseas. Time will tell, I hope they both make the best decisions for them, they're still Jayhawks!

That headline could have been taken from about every single game this season.

They both have potential......But neither one is ready to go pro and we all know it.

Hate Quentin Grimes as much as you want. -- He was 1 for 8 and he took the last shot to try to tie an (NBA combine) game. Onions. He's a 19 year old Evan Turner. I'm all in on Quentin Grimes, aka: 'The Algorithm.'. NBA