As the Kansas basketball coaching staff continues filling out its 2019 recruiting class the Jayhawks also find themselves in good standing with one of the elite prospects for the Class of 2020.

Considered one of the nation’s prime junior prospects, Cade Cunningham already has a scholarship offer from KU, and according to Rivals national basketball analyst Eric Bossi Duke, Kentucky and North Carolina have gotten involved with his recruitment more recently.

A 6-foot-7, five-star forward, and a teammate at Montverde Academy (Fla.) of 2019 KU target Precious Achiuwa, Cunningham began standing out even more of late with his play in Nike EYBL events. As Bossi pointed out, Cunningham is averaging 23.3 points, 6.5 rebounds and 5.8 assists for the Texas Titans, leading them to a 7-1 record thus far.

Cunningham told Bossi he hasn’t yet formalized his list of schools in which he’s interested, but added he plans to announce his preferences soon.

"Just seeing their plan for me is what really matters," Cunningham told Rivals. "I don't want to really look on what they've done in the past. That obviously makes sense to check it out, but I want to see what they can do for me."

Cunningham reportedly has offers from KU, Virginia, Texas, Oklahoma State, LSU and other programs at this point.

He told Bossi one quality he is looking for in his future college basketball home is the ability to “immediately” contend for a national championship.

"That's a big one,” Cunningham told Rivals. “Playing for a coach that is going to develop me for the next level and play me as a guard, just as a basketball player in total. A good coaching staff and then great players around me who are going to let me play my game but will also compete for a national championship."

In an interview with Bossi for Rivals.com, Abdur-Rahim, a 6-6, four-star forward at Blair Academy (N.J.), discussed what he already has heard from some of the coaches recruiting him.

Abdur-Rahim described not only his interactions with Michigan, Georgia, Villanova and Connecticut, but also some conversations he has had with KU head coach Bill Self.

According to Abdur-Rahim, Self called him a “special” player who could fit in “great” at Kansas.

“He wants me to come down and come to a game or take an official visit during the fall,” Abdur-Rahim told Rivals. “I’ll probably plan on doing that too. He says I fit well with their system and they'll continue to watch me play during the spring and summer.”

Abdur-Rahim shared that Michigan had recruited him “from the jump.” However, he shared that bit of information a couple of days before news broke of John Beilein leaving his head coaching position with the Wolverines to become the new head coach of the NBA’s Cleveland Cavaliers.

Jabri is the son of former NBA forward Shareef Abdur-Rahim, the No. 3 overall pick in the 1996 draft.

KU a favorite for Achiuwa and Hampton?

According to Rivals national analyst Corey Evans, KU might be the favorite in the recruitment of two of the top available prospects remaining in 2019.

Evans shared his opinion that when Memphis picked up a commitment from Rayjon Tucker, a graduate transfer from Arkansas-Little Rock, it made the program a less desirable landing spot for Achiuwa.

Per Evans, Achiuwa, a five-star prospect, primarily is considering KU, North Carolina and Memphis, and the 6-9 prep forward is expected to announce his choice on Saturday.

Meanwhile, Evans described KU as “the school to beat” in the recruitment of five-star guard R.J. Hampton, from Little Elm, Texas.

This kind of positive news will send the Chicken Littles over the edge... 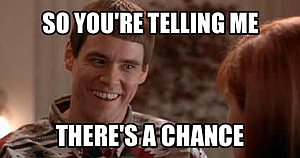 have a good feeling about Hampton coming to KU. Kind of felt that is why Tucker didn't come to KU because he knew Hampton may eat into his PT.

Would be more surprised if Precious came here but that would be awesome. He appears on the cover to remind me a lot of SDS so if/when he gets freed there would be a healthy competition.

Quite frankly until they announce us on social media and sign a letter of intent, I'm not assuming. Hopeful yes, but certain? HELL NO.

Same here...as positive as this might sound, doesn't mean much until they themselves actually say the program they are attending.....

....in other news the sky isn't actually falling until it lands on your head....

Really?? It doesn't count until players actually commit? Who knew? Everyone thought that these writers decided....Duh...

Craig. Are you an adult, chronologically speaking? Seriously. How old are you? The stuff you post is such utter nonsense it seems like the work of a child.

Says the "man" who hurls childish insults on a regular basis ...

Lenny....it would be unfair to engage in verbal jousting with a mere child, no matter how antagonistic Craig might be.

In your case, I'm fairly certain that you've reached the age of adulthood. There's generally no point to engage you because you rarely even attempt intelligent discourse, case in point.

@Len Shaffer..Jay Scott is an absolute IDIOT..Paris Hilton and Kim Kardashian are intellectual giants compared to him LOL..he, or should I say "IT" is probably just butthurt because Ive been making him look bad and he has no real comebacks..so IT relies on insults in some desperate attempt to regain his confidence..kinda feel sorry for the guy really..this message board might be all he has LOL

Dude...seriously. You're the guy who wondered why HCBS hadn't locked up recruiting midseason when all the scholarships were taken. Then you doubled down on it over and over.

The question stands. Are you a child or an adult? I can't in good conscience continue to mock your stupidity if, as it seems, you're in junior high.

Apparently you missed the story that said KU actually did have enough scholarships to give to Hampton, precious and the 2 grad students (prior to their commitments)...I know you know the story because its the only comment of mine you didn't respond to...probably because you got proven wrong lol its ok little one ,we all know you're trying your best..but some of us, and by us I mean you, aren't meant for adult conversations....and for the record" you're the antagonist one..you're the one who keeps calling anyone who doesn't agree with you "chicken little" ....did you expect to insult people and NOT get confronted ??!!!..no-one asked for your idiotic feed back. If you don't like someones opinion then just keep scrolling....

Kansas had ALL THIRTEEN scholarships taken until after the season ended. 11 for active players plus one each for McBride and Braun. Even a relatively intelligent 10 year old understood this. Not you.

If you can't understand that and are stupid enough to argue it going forward you have no place in this discussion forum. It would be even worse if you were an actual adult.

dude dont cry at me, take your lazy over inflated over exaggerated ego and read the story for yourself...it says KU has the room for all 4 of those kids...if you dont agree then forward your cry baby complaints to the writer of the story since THEY put the info out there..just take the L and move along kid

What story? What on earth are you babbling about?

Are you really this stupid or are you just acting stupid to get attention? Are you a special needs child?

OF COURSE there are scholarships available now. A normal 8 year old would understand that. The Lawsons left. Moore left. Grimes appears to be leaving. Do you somehow think this is news?

You were crying like the deranged child that it now seems obvious that you are about HCBS failure to fill spots that were not there and could not be filled rationally, practically or ethically until players announced that they were leaving. Coach Self's hands were tied until the season ended.

You're off in some parallel universe having some unrelated discussion. Please stop further exposing your ignorance. Get a nice glass of milk, put on your Buzz Lightyear jammies and go to bed.

Come on kid, you know what story I'm talking about .the one where it talks about the "recruiting upswing"..you even commented on the story lol....I swear its like talking to my 3 year old niece when I read your messages lol....

You really can't read, can you? It's some huge revelation that there are available schollies now that players have left?

Really. You can't be this stupid. You must be a fake user ID acting stupid.

Wow.....I love how you completely ignored the question entirely lol its like you didn't even try lol... ..like I said, that article stated that at the time of the story KU had open scholarships to give to all 4 had they choose KU..perhaps it is you that need to brush up on your reading comprehension skills....3/4 of your post was full of personal insults..but yet you ask me about my age??? ..when you are the one talking like an immature child...now that's comical...when is your show at the comedy improv because your childish arrogance is comedic gold...

@jay....man I tell ya, just when I thought you couldn't sound more arrogant, more pompous and more childish, you give us all a "hold my beer" moment and just completely outdo yourself...bravo man lol

Well if they were going to sign that LOI would have to be today, today marks the end of the spring signing period - - - w not going to get either Today - will be sometime later - -Precious announcing this weekend - - RJ who knows - -says middle of May probably - -well it's the middle of May. - - Still think Precious ends up at Memphis

It's hard to imagine Precious committing to Kansas before the De Sousa appeal is done. If SDS is cleared there are 4-5 bigs, depending on what position Enunara really plays best. a High rated frosh isn't likely to relish that kind of competition for playing time.

I really like Cade's style. He's a slasher, great ball handler, a very good shooter, passer & defender. This guy is a top of the line gem. Getting him & Precious would be great!

Cade is sorta like Garret with a jumper.... who knows? Maybe that's a possibility come fall.

The hairdo is the only similarity between the two, if I may reckon, Jay. I assume you're just joking, right? No offense to Garrett. But Cade is waaaaay more versatile than Garrett. Defense and college experience are Garrett's only advantages. He doesn't even have the right mechanic to shoot from outside. Cadet has super court vision and is capable of creating shots for his team.

Respectfully, I'd say that the shot is the only real difference. Garrett is a capable PG and can guard 4 positions. He's great at getting to the basket, especially when you consider that he's guarded without fear of a pullup jumper.

Iowa grad transfer Isaiah Moss picks Arkansas. HCBS apparently declined to offer him even though he visited. What does that say? Moss isn't that good or HCBS is saving the scholarship for Hampton, Achuiwa or maybe Grimes?

Assuming Dotson, McBride, Garret, Agbaji, Braun, Enunara, Mitch, Mac, Dok and DeSousa there are at least three to use.

6'5 Moss averaged 9pts 3 reb and 42% from 3 in 20ish mins per game. Why no offer? Did he need playing guarantees that couldn't be made? In any case, not offering Moss seems to indicate HCBS is confident he has better options.

Really? Maybe Self is going all in on a trifecta or he has someone better in mind. I was thinking that Self might be leery of another transfer not living up to expectations but apparently, he is in the market.

I wouldn't bet against him.

That is a lot of assists from a 6-7 forward.