The Jayhawks should know by the end of this weekend whether one of their top recruiting targets will be playing in Lawrence next season.

Precious Achiuwa, a 6-foot-9 forward who played at Montverde Academy in Florida, made it known via social media that he will be announcing his commitment in the coming days.

“The answer to y’all question is this weekend,” Achiuwa wrote on Twitter Monday night. “Stay tuned.”

The McDonald’s All-American also posted to his Instagram story that he plans to commit to a program this weekend.

A five-star prospect rated No. 17 overall in the Class of 2019 by Rivals, Achiuwa reportedly has considered Kansas, Memphis, North Carolina and Georgia, among other programs. Some recruiting experts consider Memphis the favorite to land Achiuwa.

The consensus top uncommitted prospect in the Class of 2019, five-star guard R.J. Hampton may be closer to picking his college destination, as well. 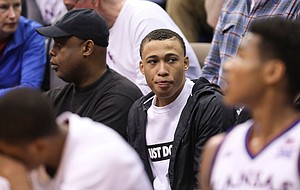 Now a Class of 2019 recruit, Kansas target RJ Hampton watches a KU game from behind the Jayhawks' bench on Saturday, March 9, 2019 at Allen Fieldhouse.

While Hampton, a 6-5 guard from Little Elm, Texas, was even less vague than Achiuwa while hinting at his timetable for reaching a decision, Hampton also indicated one could be right around the corner.

Hampton tweeted out on Monday evening, “look at my bio.” In his updated Twitter bio, Hampton wrote: “your question will be answered soon.”

According to 247 Sports’ Evan Daniels, when 2019 guard Boogie Ellis committed to Memphis on Monday it took the Tigers “off the board” in Hampton’s recruitment.

That leaves KU, Texas Tech and Kentucky as potential landing spots for Hampton, barring another program joining the mix late.

Earlier this month, reports indicated Hampton would make his college choice by the end of May.