The Kansas football program has landed its first offensive lineman for the Class of 2020.

Jackson Stoefen, a three-star prospect from North Scott High, in Eldridge, Iowa, announced his decision to commit to Les Miles’ Jayhawks on Thursday evening, via Twitter.

“This process has been a long journey — ever since I was a kid, I have dreamed of playing college football,” Stoefen wrote in his social media post, in which the O-lineman also thanked family members, as well as coaches from various staffs who recruited him.

While Stoefen, a 6-foot-5, 276-pound tackle, reportedly had several scholarship offers, KU became the first and remains the only Power Five program to extend one to him thus far.

Stoefen told Scott Chasen of 247 Sports it meant a lot to him to be recruited by Miles, and also noted the importance KU O-line coach Luke Meadows played in the process.

“I sat in a meeting with Coach Miles and my parents. He pulled up my Hudl highlights and just sat there and broke it down,” Stoefen said. “And it’s kind of crazy. You’re looking at a guy that’s going to be a Hall of Fame head coach and an O-line guy at that sitting there and telling me that my feet are just awesome and everything about how I play is good. The things I don’t quite do so well, he can directly coach up."

Stoefen told Jon Kirby of Jayhawk Slant that he visited KU twice, the second time with both of his parents, Jake and Anne.

All verbal commitments, of course, are nonbinding. The soonest any of the players aligned with the program can sign with Kansas is December.

Thank you to everyone who has been there for me throughout this process. Especially @Lancer_Strength, @TheStrengthU, my twin sister @JoieStoefen, and my parents. I am proud to say that I have committed to Kansas University to continue my education and football career!#Hail20ldKU pic.twitter.com/a24epykUot

It's so early that it is really hard to comment on the progress of recruiting other than to say, I'd rather have 6 commitments than less than 6.

So, right now, we are right there. We are ranked 39th in the country in recruiting and have the 38th best coach according to some ridiculous article, so we are playing to the back of our baseball card.

This looks like a very solid start. Kids committing to us know that it could be a long season...playing time early certainly has to figure into their commitments. So, I would think we won't have a great deal of attrition, even though we know we'll lose a couple before signing day.

But we are building some Big Mo and one step forward gets you one step closer. So keep grinding Coach Miles. My suggestion for the sideline this year is not a Turnover Chain, but a Big Ass Grinder for the guy who really brings it each week.

The kid seems very enthusiastic about coming to KU. He seems to have the tools to be a successful lineman. Might need to redshirt, but that would only serve to help him develop down the road. A solid 3 star recruit, a little concerning he didn't have any other P5 offers, but it was still a bit early in his recruiting.

Most P5 teams are going after 4 and 5 star athletes

Going after them is one thing landing them is another. Beaty went after a ton of big name recruits, but didn't land many and missed out on good mid-range prospects in our backyard. Also, most teams are made up of 3 star kids, not 4 & 5 stars. Unless, you are Alabama, Clemson, and the like. 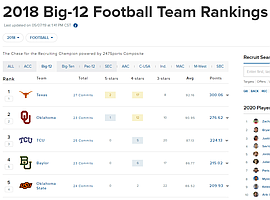 I know! I literally just showed three teams in our conference who have all vied at various times for the championship and all are recruiting at the same level as we are. It seems that some people can't read more than 140 characters at a time.

Its a start hopefully for something better in the future!