Ever since a blue betta fish was adopted by the Kansas softball team, things have been a little different at Arrocha Ballpark. The fish, whom the team named Carl, joined the Jayhawks ahead of their trip to Wichita State. The next weekend, Kansas swept Green Bay.

“Carl is our rally fish,” sophomore center fielder Brittany Jackson said. “We bought Carl when we were in the slumps, and we were like, ‘Alright, Carl’s going to give us a good little boost.’”

Now in his seventh game with the Jayhawks, an 18 run weekend fueled by Carl’s mojo propelled Kansas to a series win over Baylor with a 7-1 victory in game three.

Take, for example, the bottom of the third inning on Sunday.

Freshman Morgan Wynne scored the go-ahead run on a wild pitch to put Kansas up 2-1. Soon enough, “Carl” chants could be heard across the field as the Jayhawks had one of their first early game rallies going in a while. 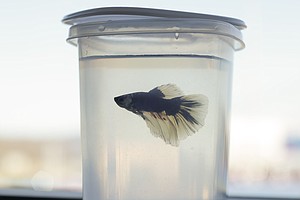 The Kansas softball rally fish, Carl, swims in the press box sheltered from the cold weather. Kansas won its series over Baylor 2-1.

Three at bats later, senior right fielder Jennifer Marwitz had a two RBI double off a dropped infield fly hit into the sun to shortstop, sending both Sydnee Ramsey and Miranda Rodriguez home. It would go on to be a three hit inning where the Jayhawks nearly turned through the order.

With Carl, the Jayhawks have won eight out of their last 10 games, with two via walk-off. They’ve scored 47 runs in those 10 games with 18 on the weekend alone.

“Getting more confident and relaxed in the box is what we’ve been focusing on,” coach Jennifer McFalls said. “We’re getting some different production from different players, not just one or two athletes right now. So it’s really been a great team effort at the plate.”

Splitting its first two games against the Bears, Kansas had to go up against the face of the Baylor pitching staff in Sidney Holman for the rubber game. Holman entered the game leading the conference in innings pitched at 116.1. Kansas senior Brynn Minor trailed in second with 109.1 herself after pitching a complete game in game two.

Freshman ace Lexy Mills opened the game allowing a run in the first inning, as Baylor junior Goose McGlaun scored on a wild pitch after advancing to third on a passed ball.

Mills (W, 5-4) went on to strike out four after giving up the run over the next three innings, and settled in the circle to hold Baylor (15-17, 2-5 Big 12) to just the one run. In the complete game outing, Mills escaped a bases loaded situation in the fifth inning and helped hold the Bears to four hits as a team on the day.

Left fielder Emily Bermel recorded four putouts in left field with a clutch snag near the warning track in the sixth inning.

At the plate, Kansas had 12 hits in the rubber game with Jackson reaching base on three of four at bats. She had a leadoff triple in the bottom of the first to open the lineup and scored the first of seven for Kansas.

Maci Omli scored in the fifth inning after stealing two bases, and in the sixth, Sam Dellinger scored after advancing on wild pitches twice. Marwitz finished the series with seven hits on the weekend.

“We are a team,” Jackson said. “There’s no people against themselves. We all know we have a job, we need to get the job done. We all play our roles really well.”