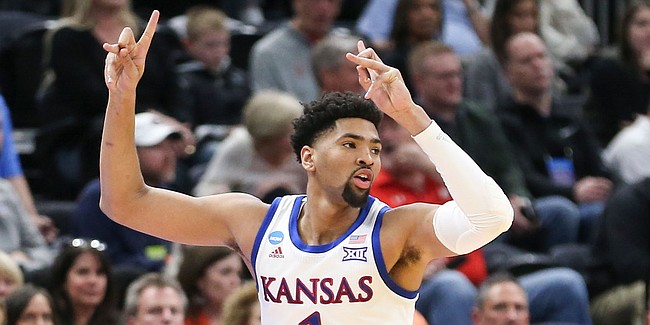 After spending nearly all of his first season with the Jayhawks smiling, laughing and staying upbeat at every turn, Kansas junior Dedric Lawson finally let it go.

Sitting in the losing locker room inside Vivint Smart Lake Arena in Salt Lake City after his team’s 89-75, season-ending loss to Auburn, Lawson buried his head in his shirt and sobbed for a couple of minutes.

The outpouring of emotion came after the first wave of questions about the loss, which featured Lawson putting up 25 points and 10 rebounds, and seemed to be a bit of a delayed reaction to the finality of the moment. 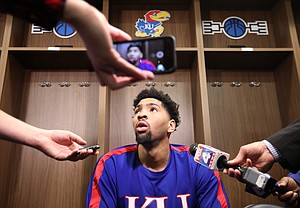 Perhaps it was the disappointment of the loss that came crashing down on him. Maybe it was more. Either way, after carrying the weight of a team, a season and an entire fan base on his shoulders, Lawson reached the point where he no longer had anything to carry. Maybe that in and of itself was what brought on the tears.

Because Dedric Lawson’s 2018-19 season, on paper, was without question one of the most productive in the history of the KU program.

“He’s had as good a year as we could ever have hoped for,” KU coach Bill Self said in the aftermath of that loss to Auburn. “I don’t know what we’ve ever ridden a guy (as much as Lawson). Maybe (former KU forward and NBA lottery pick) Thomas Robinson, but he’d be the only guy we would have ridden as hard as Dedric.”

In 36 games, all starts, Lawson produced 22 double-doubles, placing him among the nation’s leaders in that category and bringing his career total to 58 in 101 games.

Think about those numbers for a second. It basically means that, if a college basketball team with Lawson on its roster played two games in a week, the odds were better than 50-50 that Lawson would have a double-double in at least one of them. Week after week, season after season.

And, by double-double, we’re not talking about 12 or 13 points and the bare minimum of 10 rebounds. Lawson had some monster nights in those 22 double-doubles this season. 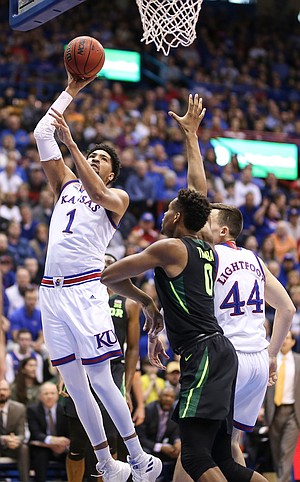 Kansas forward Dedric Lawson (1) puts in a bucket over Baylor forward Flo Thamba (0) during the first half, Saturday, March 9, 2019 at Allen Fieldhouse.

We all know that Lawson finished the season averaging a double-double, at 19.4 points and 10.3 rebounds per game. But that includes all games.

In just the 22 outings when Lawson reached double digits in both points and rebounds, his average double-double, when rounded up, looked like this: 22 points and 13 rebounds per game.

His 22 monster nights, which featured nine nights where he topped both 20 points and 13 rebounds, included two four-game double-double streaks and three stretches when he posted three consecutive double-doubles.

And his 58 career double-doubles — a total that includes the 36 he brought with him from Memphis — is the highest active total in all of college basketball among non-seniors.

It also may be where his college total stays. Although he could return for his senior season, it’s currently unknown whether he will.

Lawson, at age 21, (he’ll be 22 when the 2019-20 season begins) has long eyed a career in the NBA and could be ready to make that jump after delivering a monster season at Kansas. What that means, if he does in fact turn pro, remains to be seen. The most recent 2019 mock draft published by ESPN.com’s Jonathan Givony has Lawson projected as the 40th overall pick in the draft. That’s 10 picks into the second round and that would give Lawson a shot at making a team.

“He has got to make some decisions,” Self said last Saturday.

And while those decisions will come fast and often are made best with a clear head, Lawson said he was not thinking about his future in the locker room following KU’s season-ending loss to Auburn.

“No, we just lost by 20,” he said. “For me, I’d say (the season) was a letdown because we didn’t accomplish what we wanted to accomplish.” 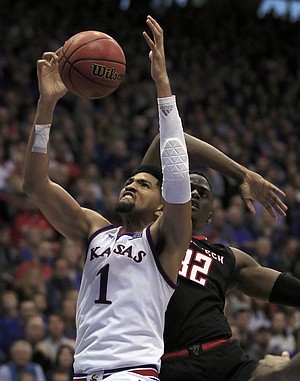 Regardless of what becomes of Lawson from this point on, his 2018-19 season will forever be remembered as one of the best by a big man in KU history.

Beyond that, his totals rivaled those of Robinson, who was a first-team All-American in 2011-12 after scoring 692 points (17.7 ppg) and grabbing 463 rebounds in three more games than Lawson.

He became just the ninth Jayhawk in the history of the program to score 700 points in a single season and the fifth player in program history to record 700 points and 370 rebounds in the same season.

“I thought he improved,” Self said of Lawson. “He scored the ball. He put up numbers almost every night. And even (against Auburn), he struggled so much like he did early and still came away with 25 and 10. That speaks volumes.”

Dedic is simply the most skilled player on the team. It seems that he always finds ways to score and rebound but it doesn't seem to happen at times when it could change momentum. That's obviously an extremely subjective opinion, not sure how you could statistically prove it out.

I'd love to have the guy on the team another year. No matter what, counting on a double double every night is a luxury any coach would want.

Plus, he was a good teammate. Don't think I ever heard him talking down about any other player. He has a workman's attitude.

It's a joke he was named 3rd team NABC All American. Great players on 1st team, hard to argue, but he's easily better than several 2nd teamers. Guarantee, if KU had won per the usual, he would've been 1st or 2nd team. What an epic and consistent season though, when everyone knew he was the guy we had to go to. Well done DLawsome!

Dedric's '18-'19 season may go down as one of the least heralded 19-and-10 performances in Kansas history. Maybe even in Big XII history.

What accounts for this?

A lackluster season for the team?

An inability to play above the rim?

To put this in perspective, Nick Collison averaged 18-and-10 and was Big XII POY as well as NABC national POY.

Not entirely sure he's fully NBA ready, but if he's a projected 2nd rounder, I think he leaves. He had a statistically phenomenal season and he has a daughter. Why risk injury and a tick downward next year. I had thought he'd stay initially, but with the updated mocks my guess is he's gone.

Anybody else w/those numbers would be a lottery pick.

I don't understand how the player that led the league in both points and rebounds wasn't named POY. WTF?

If Smoove and Dok jump Lord please give us De Sousa back or let us land Matt Hurt!!!

For real. KU is in potentially bad shape next season.

I think one thing you have to also look at is number of shots it took him in some games to get that double double. Secondly, this team rarely broke other teams down with ball movement, and frankly Grimes was probably the best at actually feeding the ball to Dedric at the moment he could do something with it, and when the defense could not get to it. We had a lot of turnovers trying to get the ball to him.

Too many times the other players simply did not move while we were trying to get the ball into him, and so he stopped looking for the other cutter. Garrett is good as that other cutter in terms of cutting at the right moment. If you look at his stats you will also see not that many assists for the best passer, as Coach Self referred to him. Did he ever have more than 5 assists in a game?

Our season next year is going to be even more of a struggle than this year because we are faced with starting at best 4 sophomores and a junior (Garrett). If they come back, you would think that Ochai, Q and Dotson, all start. Garrett starts if we go 4 guards, (but frankly we don't shoot or rebound well enough for 4 guards, and we certainly don't play defense well enough.

McCormack very likely will continue to start, and if we got him, it is quite possible that Hurt starts. If by some miracle Silvio could play then he would certainly be in the mix to start.

What has to happen next year, is we need to find some combination and mode of play that actually puts the fear of God into our opponents. Doke represented that to some extent,but we did not do the rest of the things required help Doke, the defense, the ball movement.

Speed and aggression and ferocity. We lacked those things, and where are they going to come from next year? I feel confident that Coach Self understands this far better than we do, and anybody who thinks he will just stand pat, is fooling themselves, and even the so-called returning starters had better put their competition hats on.

Finally, Charlie Moore played like a hot dog. He could not make his 3pt shot, he had way too many turnovers, and he often dribbled into trouble. K.J. Lawson had his moments, but could he ever be consistent? Lightfoot is Lightfoot, he is going to bust his butt, he will block shots and sometimes he will be clear out of position, and he struggles against athletic players.

Frankly Dawson should have been the Big12 player of the year, and in my book his ability to consistently achieve double doubles, makes him at least a 2nd team All-American, and with out poor passing, he often had to drive through 3 players to score, too often from the top of the key.

Take Dawson away from the team we had this year after Doke went out, and we are probably at best a .500 team in the conference, and not a top 25 team. Well sports fans, that is most likely where we will be when we start next year. Stay tuned.

wow, of those named above, only Wilt had more rebounds. Not sure if those stats are only double double rebounds or if someone without the scoring to go with it, had more rebounds than Dedric. He just always knew where to be when the ball came off the rim. It was like instinct. Hope he tears it up in the NBA, he is a great Jayhawk!