Notebook: Jayhawks’ defense rises to challenge on big stage in route of Huskies

Salt Lake City — Defense, defense, defense. That was the focus all week for the 4th-seeded Kansas men’s basketball team ahead of its first-round, NCAA Tournament matchup with hot-shooting Northeastern.

And then the ball went in the air, the game began and the Jayhawks needed all of one possession to know they’d be fine against the Huskies’ vaunted offensive attack.

The Jayhawks’ first defensive possession of Thursday’s 87-53 victory could not have gone better.

The KU defenders stayed tight on ball handlers, closed out quick to shooters and forced a long 2-point attempt from Northeastern leading scorer Vasa Pusica that only drew backboard and missed the rim altogether.

“It was great to see,” KU point guard Devon Dotson said of the opening stop. “That just shows if we’re turned up, locked in and communicating, we can lock them up any possession. That was a great confidence builder and I think we learned from that possession for the rest of the game, what worked and what we needed to do.” 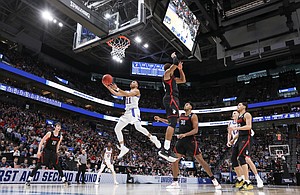 Pusica also learned a lot from that possession. Most notably, that it would be a long day.

Northeastern’s leading scorer finished Thursday’s loss with 7 points on 2-of-13 shooting in 31 minutes. He was 2-of-6 from 3-point range, turned it over at the 13:49 mark of the first half during part of a four-point spurt from KU sophomore Marcus Garrett that helped Kansas take control, and left the floor for the last time with 1:28 to play.

“Guys locked in and guarded today,” said KU junior Dedric Lawson, who led all scorers with 25 points in recording his 21st double-double as a Jayhawk.

“Throughout the whole game, we really weren’t getting any open looks,” the senior from Serbia said after the loss. “You’re going to make some tough ones, but it’s really hard to make them throughout 40 minutes. The better team definitely won today. They are really talented, really athletic. We thought we had our chances coming into the game, but they deserved this one.”

Added Northeastern coach Bill Coen of KU’s defense on Thursday: “Their switching caused us some problems. And their scheme turned our team, which typically (plays with) an elite teamwork philosophy, into a one-one game and that certainly favored Kansas.”

Four were freshmen and three transferred to Kansas from other programs that did not make the Big Dance.

While the experience meant and delivered different things for each guy, freshman forward David McCormack summed it up best for all of them when talking in the locker room about the emotions of Thursday’s game.

“It’s a good feeling being able to get my feet wet and understand how the games are going to be played and the energy and the crowd,” McCormack after grabbing five rebounds and dishing two assists in 11 minutes as a KU starter. “I’m just going to enjoy it and keep playing hard.” 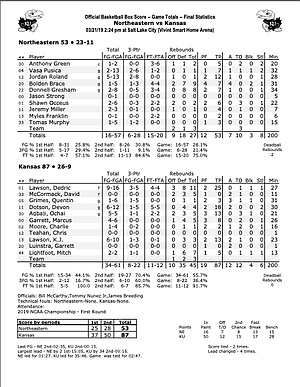 As for whether Thursday felt different than the 34 games that came before it?

“Honestly, no,” McCormack said. “I just try to drown out the extra noise. You definitely feel (the adrenaline) corsing through your body, and you just have to lock in and listen to your teammates and communicate and get the job done.”

Although his first crack at the NCAA Tournament yielded a 1-of-6 shooting performance, including 1-of-5 from 3-point range, KU freshman Quentin Grimes found a way to make a major impact despite his shooting struggles.

First, he led the team with three assists and also added two blocks in 31 minutes. But beyond that, the one shot he did make came at a crucial time.

After Northeastern opened the second half as the more aggressive team and trimmed a 12-point KU lead to 7 at the 17:06 mark, KU coach Bill Self called timeout and sparked what became a 32-6 run that buried the Huskies.

“Q, he made one basket, but he made the biggest basket of the game, getting it back to 10,” Self said of Grimes’ 3-point shot that followed the timeout. “And then Dedric made a 3 after that. We had been outplayed the first three minutes of the second half and we gained one point in the margin. So I thought those were probably the two biggest offensive possessions. After that, we got on a good roll.”

After knocking off Northeastern, the Jayhawks are now one win away from returning to Kansas City, Mo., to play in the Sweet 16.

Getting there certainly won’t be easy and standing in KU’s way is No. 5 seed Auburn, which won a thriller over New Mexico State, 78-77, in Thursday’s first game in Salt Lake City, despite nearly blowing a 8-point lead in the game’s final 2:15.

Auburn is led by head coach Bruce Pearl and features a team of ultra-athletic guards that, like Northeastern, can shoot the daylights out of it. Auburn, which finished tied for fourth in the SEC at 11-7 (26-9 overall) and won the SEC tournament by beating Tennessee by 20 in the title game, ranked second in the SEC in 3-point shooting, at 37.6 percent, third in scoring offense (79.6 ppg) and fourth in scoring defense (68.1 ppg).

Said Pearl in a self-assessment of his team after Thursday’s victory: “We play 10 guys and we fly around and we turn you over and we shoot a lot of 3s.”

Auburn and Kansas have met just once, with the Tigers winning a 1985 NCAA Tournament game in South Bend, Ind., 66-64.

Grimes, you need to listen and remember what your dad told you. You need to have a nice arc when you shoot those 3s. Fix your elbow and palm, ask one of those coaches to take a slow mo when you fire your shots. Ask them to measure the angle of your shot. You can fix your 3pt shooting easily. Go back to the shooting basic: raise the roof!!! You'll be a great shooter next season.

Seriously. If you really think that Quentin Grimes is looking online for help with his release and arc from the likes of you...or that the KU coaching staff, who helped dozens of players become excellent shooters haven't already worked with Grimes......you have massive mental health issues.

Statistics on Grimes as a shooter this year are 59% FT , 34% 3-pt FG, and 38% FG overall. Jay, posters are tired of your personal attacks. How would you like to be called Jay Scott's "Bath Tissue" or Jay "Chicken Nugget" Scott? Feelings are being hurt,

Edward, thanks for being a great Jayhawk fan. Jay's words don't hurt my feeling at all. I know I'm supporting Q and I want to see him growing as a better player. This makes me feel proud of what I'm doing, and makes me feel more as a Jayhawk! God bless you, Jay.

Grimes has to see the light and realize where his shortcomings are. Hopefully the coaching staff will help him work through his shooting, dribbling and defensive woes in the off-season.

An above average incoming freshman could easily bump him to the bench next year !

We've won an NCAA tournament game in 13 consecutive seasons now, the longest active streak. For all the pain we've experienced in this relative down year, every single team in the country has experienced more heartache than we have the last 13 years. Just another remarkable stat of consistency.

Spellchecker let you down, Matt. The title should read “rout” not “route”.

Great game by our young but talented Jayhawks! With every win they mature and learn more how to play smarter, Bill Self style, basketball.

Unfortunately, "co(u)rsing through your body" isn't even a spellcheck error. Guessing it's deadlines, though a good article anyway.

It will be interesting to see how our D matches up when we face a more athletic line-up of 3 pt shooters and some athletic bigs that likely won't be giving Dedric as much room to work. I still like our chances, especially when they made excuses for being tired in game 1 (5th game in 8 days). It wouldn't seem that 6 in 10 days will be easier, and even more so when we were able to rest the starters.

It's also interesting that we're 34-2 in first round games, but people loved to talk about the 2 being back to back IIRC.

I think we also currently have the most appearances in a row.

It was the most complete game I have seen KU play since the blowout of Texas Tech in Lawrence. Especially impressive was holding Northeastern to 21.4% from 3-point range. It seems as if the Jayhawks have finally learned the importance of defending the 3-point line. If they can do the same thing against Auburn's shooters, that would be even more impressive.

So nice to have a game like that. Hope we keep driving the ball like that. Great defensive effort by all.