3-point D: KU was better by the numbers than you might think 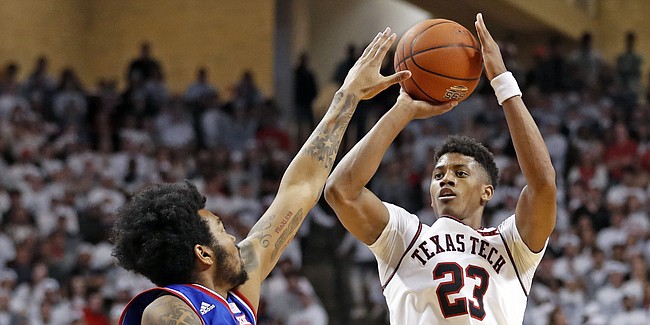 When it comes to defense, Bill Self’s pride and joy as a basketball coach, the 2018-19 Kansas Jayhawks rank 15th in KenPom’s overall defensive efficiency rating but just 131st in Division I in defending the 3-point shot.

Eleven teams knocked in double-digit 3-point makes against Kansas this season and 10 more hit at least eight 3-pointers in a game during the Jayhawks’ 25-9 season that led them to the No. 4 seed in the Midwest region and this week’s date with No. 13 seed Northeastern in Salt Lake City.

While all kinds of factors went into KU’s defensive numbers, — from size and experience to style and depth — Northeastern’s strong showing as a 3-point shooting team this season (38.8 percent, 14th in Division I) puts the spotlight directly on KU’s 3-point defense, which could very well determine whether the Jayhawks win or lose in Round 1 on Thursday. 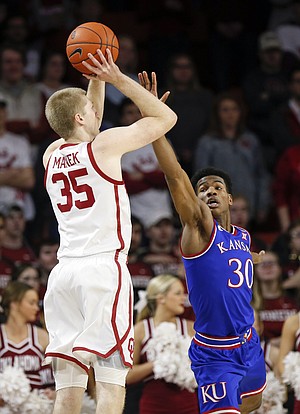 “I haven’t studied Northeastern a great deal yet,” Self said Sunday after this year’s bracket was unveiled. “And I don’t know their personnel yet except they’ve got four guys that shoot it every time they’re open. That’s hard for us. And we’ll definitely have to tighten some things up.”

While the overall perception is that this has been one of Self’s worst teams in terms of 3-point defense, a deep dive into all 34 games to this point paints a slightly different picture.

First, KU allowing opponents to shoot 33.6 percent from beyond the 3-point line marks just the fourth worst mark of the past 10 years.

What’s more, that 33.6 percent mark that KU gave up to opposing 3-point shooters this season came on 863 attempts, the second-most against the Jayhawks in the past 10 years.

Only last season’s total of 947 attempts, which yielded 33.3 percent, came in higher, and the KU defense’s averages during the past 10 years come in at 32.9 percent on 749 attempts.

Because 3-point defense was so often to blame for KU’s nine losses — the Jayhawks allowed 80 makes in 198 attempts, or 41.4 percent, in those losses — it was easy to overrate the issue when it came to breaking down why this team finished third in the Big 12 and dropped below a 3 seed in the NCAA Tournament for the first time in 13 years.

But it’s worth noting that KU held its opponents to a lower 3-point percentage this season as many times (17) as they allowed their opponents to shoot better than the statistics said they would entering their head-to-head matchups. 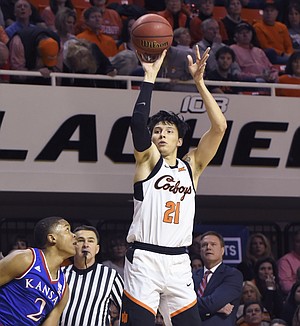 In all but one of KU’s losses this season, the Jayhawks’ opponent shot better than their season average. The lone exception came on Jan. 26, at Kentucky, when the Wildcats entered the game shooting 35.7 percent from 3-point range and shot just 4-of-18 (22.2 percent) in an 8-point victory.

Before we look back at all 34 games, here are a few notable results that jumped out when looking back at KU’s 3-point defense this season.

• Against teams shooting 36 percent or better coming into their matchup with Kansas, the Jayhawks held their opponent below its season average five of seven times.

• Granted, it was early, but Louisiana, in Game 3, entered its matchup with KU with the highest 3-point percentage (44.9) the Jayhawks faced all season and the Ragin’ Cajuns shot 33.3 percent in that game.

• Against Wofford, which enters the NCAA Tournament ranked second nationally at 41.6 percent, the Jayhawks limited the Terriers to 19.2 percent (5-of-26) from 3-point range, 20 percentage points below their season average at the time they came to Allen Fieldhouse.

• Against teams that entered their game with KU as below-average 3-point shooting teams to begin with (32 percent or worse), Kansas held those teams to an even lower percentage in five of seven meetings, finishing 7-0 in those games.

• In Big 12 play alone, including 3 postseason games, 12 Kansas opponents shot better than their season average at the time and the Jayhawks lost seven of those games.

It’s hard to say what all of this means for Thursday’s matchup with Northeastern — 3 p.m. on TNT — because even though stats such as these can lead to quality breakdowns of individual games, when the ball goes up, it all comes down whether a team and/or individual players happen to be hot or cold on a given night.

That fact certainly has been proven true by KU’s offense as much as its defense, with the Jayhawks shooting 35 percent from 3-point range this season — on 141 fewer attempts than its opponents — but also being outdone behind the arc in eight of their nine losses.

Here’s a quick look back at all 34 games of KU’s 3-point defense, including what the team shot coming in, what it shot against Kansas and where it finished the season.

Loose and free...in this years tournament we are the underdog...no one believes.....so let it all hang out and play fearlessly....with an IRON WILL...and yes.... defend that 3 pt line with your life......no more playing around...ITS ALL BUSINESS from now on out...FOCUS and play ball...like you know you can..

Nice article. To geek out a bit more, it would be interesting ask did the team shooting greater than their average from 3 make a difference in the outcome of the game? While it would look significant that ISU shot 16$ better than average from 3 in our loss to them, would it have made a difference in the outcome if we had held them to their average? Many times the change in percentage is just a basket or 2 and wouldn't change the outcome. Sometimes, it's a 1 possession game and every possession is crucial.

This is probably an impossible statistic to generate, and at some level too subjective, but I would be interested in knowing the percentage of contested/uncontested three pointers. We still have defensive screening mistakes resulting in wide open threes.

In the games we win, the opponent doesn't hit them. When the opponent hits them, we lose. Again, just my subjective eyeball assessment. Maybe in some of those cases, the wide open shooter is someone we don't mind taking that shot.

Even if we can defend the 3s. The double team defense by bigs is costly. Our bigs seems late getting back to their man plus they face away from the ball. We got beat a lot in pick and roll between opponent's guard and their bigs. Often, our switching on defense creates a big hole, this I agree. We are more effective having the bigs stay down low.

The numbers don't look encouraging but Northeastern is in the Colonial so it's hard to say how good their 3 point shooting would be in a more competitive conference. What concerns me more is their starting 5 is comprised of 2 seniors and 3 juniors.

Interesting numbers, Matt, but I'm wondering what the breakdown is for road and neutral-site games. I would bet that the great majority of our best games in defending the 3 was at Allen, whereas most of the worst were on the road.

Of course this isn't on the road, but it also ain't Allen.

I may have missed a neutral site game, but I think we averaged allowing approximately 3% above average shooting away from AFH. Doesn't seem like much difference. 1 more basket out of every 33 shot taken. Not even 1 basket per game, so really next to no difference in the outcome at all.

It might feel bad because there have been some games, especially lately where the opponent blistered us from deep on the road. On average though, it's not significant. The problem comes with the outliers. Northeastern has the ability to make a truckload of 3's if we let them get comfortable, and 3 is always more than 2.

Kind of not the whole picture. As the article notes, the prior two season's teams had defensive 3pt issues too. However...KU was able to offset that deficiency by shooting well from 3 themselves in the prior two seasons. This year's team doesn't have the ability on most nights. So the 3pt lapses are slightly magnified. Heck...this year's team has problems scoring anywhere nevertheless 3pt line on many occasions.

Kansas does too much switching on the perimter with sagging defense. The guards need to be able to fight through screens a little bit better quite honestly. I also don't know why we feel the need to play a ton of help(double team) defense inside. We have three decent shot blockers in the post, lightfoot and McCormack

There isn't much I hate more than analytics which proves the opposite of what everyone else can see. The only real numbers that matter are the final scores. Kansas lost games because of their defense, it inability to shoot, not a single deep threat and what the hell is Charlie Moore doing on this team?

Have we ever had a team that had 5 McDonald's All-American's on it? This is the worst job Bill Self has done at Kansas.

Did I hear a faint 'gong' Owens after the game?

Your post made sense until you said it was the worst job Self had done at KU. I actually think it's been one of his best. Have you forgotten that Dok got hurt early, Silvio has been out for the whole season, etc., etc.???

This would be an entirely team if everyone had stayed healthy, been eligible, and not had to leave for personal reasons.

I think Coach Self develops young talent better than anyone and has found himself in one of those wheels that hamsters love to run in trying to compete every year for the top talent. There's a lot to be said about continuity. Morningstar and Reed? Should have been a final four team and yes, having the Morris twins did not hurt

I see why you could look at it as you do but I'm still not sold. Give me a couple of weeks to think about it.

Charlie Moore's prolonged slump is a mystery to me. He was Mr. Basketball in Illinois his high school senior year. He started every game as a Cal Freshman and averaged 12 points per game. Believe it or not, he once scored 38 points versus the UC Irvine Anteaters! (A bit ironic that UC Irvine will face off against KState this week). The Solution? I Dunno! Feed him chocolate covered ants?

KU issue is they allow opponents to get comfortable..when they limit attempts they are good..the losses were more an issue of the lack of 3pt makes for KU than it is how many the opponent has made

Rumor has it that a Fedex Plane is on its way from Memphis to Salt Lake with a stowaway on board! Wishful thinking!